Modernisation projects at the Amursk and Mednogorsk CHP plants are the first schemes in Russia to be carried out under the Joint Implementation provisions of the Kyoto Protocol. However both projects still lack a formal Letter of Approval from the Russian government. 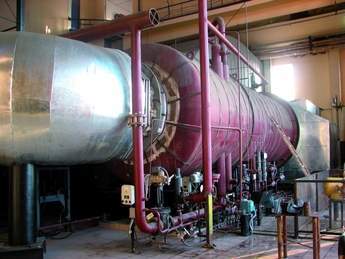 The Danish Environmental Protection Agency (DEPA), through its carbon dealing agency, DanishCarbon.dk, has contracted for 1.2 million tonnes of CO2 (plus an option on additional reductions) from two JI (Joint Implementation)* projects in Russia, at the Amursk and Mednogorsk CHP plants. These were the first such projects to be implemented in Russia, but final approval is still awaited from the Russian government (the Russian National Designated Focal Point, DFP) in the form of a Letter of Approval (LoA). The Emission Reduction Purchase Agreements (ERPA) for the projects are conditional on this approval. It is seen as a formality, but is still pending because, as yet there is no formal approval of the regulations for JI projects within the relevant Russian ministries and agencies involved.

The Amursk and Mednogorsk JI projects were developed during 2004 by the Energy Carbon Fund of RAO UES, on behalf of Khabaroskenergo and Orenburgenergo, respectively, regional branches of the Russian JSC UES.

The JI projects were proposed to Denmark as a buyer of carbon credits in DanishCarbon.dk’s first tender round in September 2004. Evaluation of both projects proved positive. However, some of the original baseline calculations had to be adjusted before actual contract negotiations could be opened. Revisions of the baseline took place during winter 2004/2005 and included redetermination by an Independent Entity. During spring 2005 agreement was reached on the purchase contracts, and on 28 June 2005 the contracts were signed at the premises of RAO UES in Moscow by representatives from DEPA, RAO UES, and the Khabarovsk and Orenburg energos.

The two JI contracts were the very first to be entered into/signed in Russia – following Russia’s ratification of the Kyoto Protocol in November 2004.

By the end of July 2005, several DEPA financed projects providing technical assistance to the Russian Ministry of Economic Development and Trade (MEDT) had been completed, including provision of guidelines for JI approval procedures in Russia, legal advice, pilot inventories for the Novgorod and Leningrad regions and an outline for a Letter of Approval for JI projects in Russia.

However it became necessary to prolong the LoA deadline for Amursk and Mednogorsk, and on 28 October 2005, DEPA – in agreement with MEDT – postponed the deadline to 28 February 2006. During spring 2006 a further request for prolongation of the deadline for issuance of LoAs was made by MEDT to DEPA, pushing the date back to 1 September 2006. DEPA accepted the request. But at the time of writing (November 2006), the LoA had still not been issued by the Russian government for the two JI contracts. Approval was expected by the end of 2006.

Nevertheless, at each extension of the deadline for issuance of LoAs DEPA has obtained confirmation that both projects are under implementation according to the agreed schedule, and indeed at Mednogorsk the two gas turbines are installed and pre-commissioning is being carried out.

The Amursk CHP plant consists of ten utility boilers with five turbines, together with a number of heat-only boilers. The plant supplies heat to the town of Amursk (population about 50 000) and also provides around 800 million kWh of electricity per year to the local grid. The plant is located 450 km from Khabarovsk, on the Amur River, in the Far East of Russia close to the Chinese border.

The JI project, which is being implemented by Khabarovskenergo, consists of converting the two newest boiler units (units No 9 and 10) from coal to natural gas. In addition, these two units will be separated from the remaining CHP plant together with turbine unit No 5 (80 MWe in heat extraction mode) and upgraded to their original design pressure, 130 bar, resulting in further fuel efficiency. Units 6 and 7 have already been converted to natural gas.

The JI project will also include new low-NOx burners and overall control system modernisation, resulting in considerable reductions in CO2, SO2, NOx and dust emissions.

The expected CO2 emission reductions will be about 1.4 million tonnes during the five year Kyoto commitment period from 2008 to 2012 (273 000 tonne per year).

The total investment costs are estimated to be about 9 million euro. The project is financed by the emissions reduction sales revenues (ie by DEPA as buyer of the CO2 emissions) and Khabarovskenergo as project host. The carbon credits enable Khabarovskenergo to obtain long-term credit from Russian banks, while the ER sales will substantially contribute to the project financing hence making it profitable. In the Russian Federation a fuel switch from coal to natural gas with the associated increase in energy efficiency might be profitable in itself due to the low domestic gas prices. However, in the Amursk case gas is purchased from a private supplier and not from Gazprom, rendering the project profitable only with the carbon finance included. The project is being implemented during 2006-2007 and will employ Russian technology and design.

The Mednogorsk CHP facility supplies some 70% of the heat and 90% of the hot water supply to the city of Mednogorsk, which has a population of about 32 000. The project site is 230 km from Orenburg, in the South Urals.

The JI project entails refurbishment of the CHP plant to include two new gas turbines (each 10 MWe) in a combined cycle configuration with the existing steam turbine (3.5 MWe).

The project increases the electrical generation capacity from 3.5 MWe to about 23.5 MWe, thereby increasing annual electricity production from 20 to 150 million. kWh. In addition the project includes shut down of the nearby Uralelectro coal fired boiler house (3.5 km away) and connection of that facility’s heat consumers to the heat supply from the Mednogorsk CHP.

The JI project is expected to result in annual CO2 emission reductions of around 40 thousand tonnes. Additional environmental benefits will include a reduction in SO2 emissions of about 26 tonnes/year and in NOx emissions of some 16 tonnes/year. The total project investment is around 11 million euro. The Danish contribution, as purchaser of carbon credits, is roughly 10%.

As with Amursk, the project would not have been implemented without the carbon credit revenues. The JI finance contribution enabled the project host to prove the project’s bankability and thus obtain credit from Russian banks.

The project is being implemented over a time scale similar to the Amursk JI project, ie 2006-2007, by Orenburgenergo, and like Amursk, will employ Russian technology and design expertise.

As of November the two gas turbines, which are being supplied by Motorostroitel of Samara. had been installed and, as already noted, pre-commissioning was underway.

Like others in the carbon business, DEPA believes that there is big potential in Russia for JI project based carbon credits and thinks that many types of projects could be developed leading to substantial generation of emission reductions. In DEPA’s opinion “Russia clearly constitutes the largest JI market in the world.”

However, without any officially appointed Designated Focal Point in Russia and in the absence of legal basis for issuance of Letters of Approval for Joint Implementation projects in Russia, this potential counts for nothing. In DEPA’s opinion Russia is in fact at the moment losing money, as JI investments from public and private funds will seek other emerging carbon markets, as the window of opportunity for projects to gain credits during the first Kyoto JI commitment period, from 2008 to 2012, is closing.

Some progress has however taken place in Russia, DEPA believes. The Agency says that “to its knowledge,” the Russian JI approval procedures have been developed and agreement was reached during spring 2006 on the content of these procedures among the relevant ministries in Russia. The procedures have however not yet obtained formal governmental approval, no official Russian Focal Point has yet been appointed and no deadline for entry into force of the JI approval procedures appears to exist.

Other JI projects in Russia have been contracted with the Netherlands, Austria and some private companies during the past year. However, none of these have yet obtained a Letter of Approval from the Russian government.

DEPA is ready to contract three new JI projects in Russia within the coming 4-8 months. Whether DEPA can/will contract these promising JI projects depends on the issuance of the LoAs for the two existing JI contracts (Amursk and Mednogorsk) within the same period.

Looking to the longer term DEPA/ DanishCarbon has a project pipeline in Russia that exceeds 20 JI project opportunities.

Meanwhile, in the areas of inventories and meeting reporting requirements under the Kyoto Protocol, Russia has made substantial progress, which is a huge task for a country as big as Russia. EU/Tacis has provided a major input to this process, and DEPA is at present considering contributing to the development, by Danish experts, of more detailed/sector specific inventories in Russia, so that Russia will meet the eligibility requirement under the Kyoto Protocol for JI Track II emission trading.

It is unlikely that in the future DEPA/ DanishCarbon will sign ERPAs without having the LoA issued first, thereby avoiding allocation of funds over a long time to projects with a not entirely certain future.

Nevertheless DEPA reports that, in the case of Amursk and Mednogorsk, from the outset, UES RAO has been fully committed and has proved itself a competent project host.