This paper presents experience gained with non-destructive ultrasound testing equipment focused on the assessment of the adherence between RCC layers without mortar application. Laboratory and field tests were carried out at Fundao hydroelectric plant in Brazil, considering different time intervals between concrete layers. Applicability of ultrasound as a tool for RCC quality control is also discussed 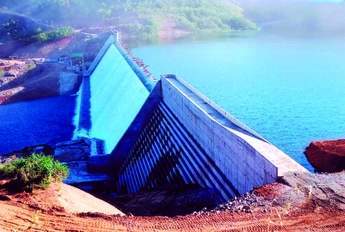 Construction of RCC dams involves a concrete of no-slump consistency which is transported, placed and compacted using earth and rockfill construction equipment [1]. In this technology the concrete is placed in long and continuous horizontal or ramped layers and consolidated by vibrating rollers.

RCC technology presents fundamental differences when compared with the conventionally vibrated concrete dam construction technique, especially with respect to the number of joints between the concrete layers. The total area of interfaces between layers is about five times greater in RCC dams compared to conventional ones [2]. This characteristic has a strong impact on the strength and permeability of RCC dams, justifying investments in research focusing better comprehension of their behaviour and performance.

The use of a rich mortar between successive layers of RCC is very effective to guarantee joints of good quality. However, its use is highly expensive given the large cement content and it can also affect the RCC productivity.

In recent dams, the use of the layering method SLM (Sloped Layer Method) opened the possibility of reducing the use of interface mortar since layers can be successively placed within a period shorter than the RCC setting time. In this context, the knowledge of a controlling method or technique, which guarantees an appropriate bonding level between layers, becomes an important tool in the production of good quality RCC dams.

This work is based on this demand and has the objective of verifying the potential use of ultrasound measurements to control the time interval between RCC layers placement, in order to avoid cold joints. For this purpose, a correlation between ultrasound pulse velocities and concrete layers adherence is sought.

Hermida et al. [3] studied the influence of admixtures in RCC setting time through the measurements of ultrasound propagation velocities. In their work, the initial setting time was evaluated in several RCC projects. They could clearly verify the effect of the admixtures with the ultrasound measurements. Also, they evaluated the tensile strength behaviour between RCC layers in cylindrical specimens with different layer placement intervals and observed that the use of retarding admixtures can maintain bond capacity between layers in longer placement intervals.

Other work in this field was presented by Ribeiro et al. [4]. In their work, besides the use of ultrasound, other traditional characterising methods for the concrete were employed to correlate with the adherence, such as penetration test and loss of workability with the VeBe. They observed that the VeBe is not sufficiently sensitive in the hardening stage of the concrete. On the other hand, the penetration test presented a good correlation with the ultrasound until the beginning of the hardened stage of the concrete. Their work suggests that ultrasound tests may be used to identify a limiting period in which adherence between concrete layers is as good as in any shorter period.

Both mentioned works were carried out with concrete specimens and show the possibility of using ultrasound to determine the initial setting time. However, it is not clear yet whether ultrasound can be used in practical working conditions as a tool for placement control. This doubt is one of the motivations of this work, which was carried out in the Laboratory and at Fundão dam in south Brazil.

The Fundão hydroelectric power plant, owned by ELEJOR – Centrais Elétricas do Rio Jordão, is situated between the cities Foz do Jordão and Pinhão and is capable of generating 122.5MW. The RCC dam on the Jordão river, in the Parana basin, Southern Brazil, has a maximum height of 42.5m and a crest length of 445.9m. Figure 1 shows an aerial view of the dam and the spillway with capacity of 7.227m3/sec and total length of 249.9m.

Fundão RCC dam was raised in ten months. The concrete was basically composed of Portland cement, ash, water, aggregates and admixtures to improve specific characteristics of the mixture. Previous to the construction period, different concrete mixes were tested in the laboratory and specified for several applications in the power plant, including the dam. The RCC shown in Table 1 was the mixture most frequently used in the dam construction.

Fundão dam was raised with a construction system where 30cm layers of concrete were successively placed one on top of the other without an interface mortar. According to the design specifications, when the interval between consecutive layers placement exceeded four hours, an enriched mortar should be put to improve bond capacity. During Fundão RCC dam construction, this interval within a lift of 90cm was never in average greater than two hours.

Normally, the initial stage comprehends velocities between 100 and 500m/sec. It is worth noting that these velocities are lower than the velocity of sound in water, despite the fresh concrete being a material of greater density.

This phenomenon, as explained by L’Hermite [5] (apud Reinhardt, 1996), is due to the oscillation of the grains in the concrete paste under the sound wave propagation, which contributes to the reduced speed of the acoustic waves. The extension of this initial stage is mainly dependent on the concrete water/cement ratio and use of admixtures [6].

In the period with fast evolution of the velocities there is mass growth of C-S-H hydrates, corresponding to the initial setting time. After a while, velocities grow asymptotically with time.

After a few tests to evaluate the performance of the ultrasound equipment PUNDIT PLUS 1006K (54kHz) in fresh concrete, an experiment was carried out in Fundão’s laboratory with the locally produced concrete RCC 126. Four cylindrical specimens 15 3 30cm were molded, vibrated on a table and manually compacted in two layers, 15cm each, without any time interval between them. This procedure was executed in two different days but with similar weather conditions (average day temperature near 30°C). Specimens were named 14-0 and 15-0.

In Figure 2 the equipment and two fresh specimens ready to undergo direct ultrasound measurements are shown.

Ultrasound measurements are presented in Figure 3, where the second and third stages of ultrasound velocity evolution with the specimen age are easily seen. The first stage was not easily identified. Measurements made in two different days correlate quite well and initial setting time for this concrete mixture was close to two hours.

Measurements in Fundão dam were executed just after a concrete layer was compacted. Pictures in Figure 4 illustrate a layer after compaction and the local indirect measurements, which were performed either on the top of the layer or a couple of centimetres below the surface.

Measurements were carried out with two standard distances between transducers – 15 and 30cm. When they were performed on the top of the layer, readings were more irregular, as a result of surface imperfections. When the transducers were positioned in the inner part of the layers velocities were more easily read. In Figures 5 to 7, velocities recorded during 12 hours in three different spots of the layer are presented.

Despite some discrepancies, it can be observed that velocities gradually increase between 100 and 600m/sec in all monitored locations, suggesting that the initial setting time was not reached within 12 hours. This behaviour is in clear contrast to the measurements made with specimens.

As a result of this unexpected mismatch between measurements in specimens and in layers a new test was executed in LAME laboratory, in Curitiba, with the same concrete mixture.

This test was performed in a block with base dimensions 75 x 75cm and height of 65cm, molded in three layers of RCC 126, each one with a thickness of 20cm. Figure 8 shows the layer compaction and surface preparation for the indirect readings.

All three layers were compacted for three minutes and placed with an interval of 24 hours. Daily average temperatures while layers were exposed and tested with the ultrasound were 19, 20 and 21°C, respectively.

Once again, indirect measurements were done with distances of 15 and 30cm between transducers. Figure 9 shows the results of tests carried out in layers 2 (L2) and 3 (L3). They show good correlation with themselves with initial setting time near to 2.5 hours. These results are also in close agreement with those carried out in Fundão laboratory with direct measurements in cylindrical specimens. Initial setting time in layers 2 and 3 were slightly greater than those seen in Fundão laboratory as a result of the lower environment temperatures.

During the same period of ultrasound tests in Fundão laboratory, 66 cylindrical specimens were molded with two half layers of 15cm and 11 placement intervals varying from 0 to 10 hours.

At 90 days old all specimens were tested for direct tensile strength. The main conclusion obtained from the results is that between five and six hours placement interval failure invariably occurred in the joint.

However, tensile strength reduction was not statistically significant up to seven hours placement interval. In other words, an undesirable preferential plane of failure is determined if RCC 126 placement intervals between layers are greater than five hours and, of course, no enriched mortar is used.

Another important aspect observed is that this particular interval was not particularly related to the initial setting time, as shown in Figure 9 with a vertical line.

Despite the fact that the results did not show clear evidence of tensile strength reduction, it can be established that from six hours placement interval of RCC 126 without enriched mortar, successive placement of layers introduce a preferential plane of failure into the dam.

These findings show the necessity of establishing a layer’s placement interval limit from appropriate laboratory simulations for the concrete mixture being used in the project.

The ultrasound equipment PUNDIT PLUS 1006K is appropriate for measurements in fresh RCC, being able to detect the initial setting time with reasonable accuracy. Tests performed in different laboratories with direct and indirect measurements were consistent. However, for reasons not yet understood, ultrasound velocity behaviour in the laboratory did not match those observed in layers of the dam.

Tensile strength tests showed the existence of a preferential plane of failure from a specific layer placement interval. However this interval is not clearly associated to any specific stage of ultrasound velocity evolution in the material.

So far, results have shown that the use of this equipment as a tool for controlling the maximum interval limit between layer placements without an enriched mortar is not yet reliable.

This paper is based on a presentation given at the 5th International Conference on Dam Engineering, held from 14-16 February 2007 in Lisbon, Portugal. For more details on the event visit www.cipremier.com or email cipremie@singnet.com.sg