The UK strengthens its European connection

Work is now well underway on the BritNed subsea link which will connect the national transmission system of Britain to that of the Netherlands and more directly to the Amsterdam power exchange. 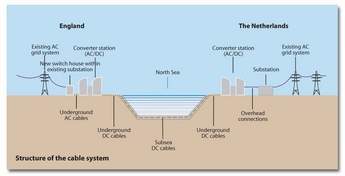 National Grid and TenneT (through

its subsidiary NLink) are currently constructing the 260 km interconnector which will for the first time connect the national transmission system of Britain to that of the Netherlands. A 50:50 joint venture was formed for the purpose.

The BritNed link, which is one of the largest power transmission projects ever undertaken in Europe, and is a key component of the EU’s Ten-E list of priority projects aimed at creating a truly pan-European transmission network, will by joining together the two systems be making a significant contribution to the security and diversity of electricity supplies in both countries. It will also facilitate further competition by integrating the UK grid more strongly with the UCTE (Union for the Co-ordination of Transmission of Electricity), thereby helping to enhance the north-west European energy market.

BritNed will be capable of carrying power in either direction, the decision to switch being dependent on market conditions such as price differential and patterns of demand. The cable will have a nominal capacity of 1000 MW, will be 260 km (162 miles) long and cost around r600 million to build. The preparatory and environmental mitigation stages of construction have started and capacity should be available by 2011.

The converter stations will be built at the Isle of Grain, Kent, in the UK and at Maasvlakte, near Rotterdam in The Netherlands, in both cases at existing substations, and are scheduled for completion by July 2010. Preparatory works are underway now. At Grain, an access road for the converter station was completed in September and in October work started on the structure. The civil works at the Maasvlakte substation also started in October.

The project has a somewhat controversial political background in the UK. Some in its energy industry have suggested that the capacity margin is now so low that the system is only one power station failure away from blackouts. Naturally National Grid has taken issue with reports suggesting that the lights may be going out in the near future. However, most are agreed that while the country may not be plunged into immediate darkness, sooner rather than later demand will outstrip supply. The UK already has a 2000 MW link to France and another connector (Moyle) linking Scotland and Ireland, but BritNed will be the first large new UK interconnector for two decades. And although the project has been on and off the drawing board for the past 20 years or so, growing concern about the UK energy gap has given it a renewed sense of urgency.

One of the UK’s most influential energy experts, Professor Ian Fells, warned in a report published in 2007 of the risk of blackouts within five years as the UK loses almost a third of its generating capacity – many of the older coal, oil and (probably) nuclear generation plants will be closed over the next 10 to 15 years. Prof Fells, who touched on BritNed in his report, argues that interconnectors are a prudent short-term measure that can take some of the strain while the rest of the energy infrastructure catches up. However the logic of the situation would change if several more interconnectors were to be built, most likely to Scandinavia, Germany and France. In that case, says Fells, the UK would become fully integrated into the European electricity market and that would provide the level of security that is probably going to be needed.

The business motivation behind linking the Netherlands and UK electricity systems is that it facilitates competition, and the political and industrial one that it increases the diversity of supply in both countries. It also supports the European Commission’s drive to create a strong market characterised by transparency and increased liquidity. The new link is a step towards a single market in north-west Europe and is expected to open up the market.

The investment of € 600 million and costs and revenues will be split on an equal basis between the two partners. The interconnector will also enable both markets to operate more efficiently and responsively.

It will be a commercial, or ‘non-socialised’ interconnector, funded and operated independently from National Grid and TenneT’s regulated businesses. Customers will have open access to the capacity via a combination of short and long term actions. This approach gives customers real choice about how they bid for capacity and ensures that BritNed supports the EU’s ambitions for greater transparency in the European energy markets. A part of the cable’s capacity (expected to be around 300 MW) is reserved for market coupling. The operators of APX, the Amsterdam market hub, are well into the process of designing the specifications and integration of the cable requirements in the other market coupling projects emanating from the hub. The solution will enable market coupling from the Netherlands in all directions: north (via NorNed), east and south (via the Central West European market coupling replacing the Tilateral MC) and west (via BritNed). It should also link the two electricity markets operated by APX in the Netherlands and the UK

These various market coupling developments have meant that APX, in close co-operation with its partners, has been able to develop a high degree of expertise for market integration in all its aspects – design, information technology, and daily operations for trilateral market coupling.

The cable system will be a bi-pole 450 kV mass-impregnated high voltage direct current link with a pair of high voltage cables bundled together and buried at least a metre below the bed of the North Sea. HVDC has been chosen as the power medium for the cables between the converter stations mainly because it is the least lossy over the distance involved.

Laying of land cables at Grain and Maasvlakte is scheduled to start in April this year. The subsea installation of the cable will start in May or June this year and continue until the end of the summer window in October, by which time 50% of the cable should be laid. The remaining 50% is scheduled to be laid during the same window in 2010 in time for testing later in the year and final commissioning and handover in 2011.

The 260 km of continuous HVDC cable will be installed by specialist cable-laying vessel Skagerrak. The sub-sea and land routes have been carefully planned, working with the relevant marine and local bodies over several years to ensure the minimum impact on the areas involved.

Both joint venture companies own and operate other interconnectors. TenneT in partnership with Statnett in Norway has recently completed the largest ever underwater electricity link (as measured by capacity and length), the 580 km NorNed, built by ABB and Nexans. National Grid jointly owns and operates the existing England-France link IFA2000 and also recently constructed the 360 km Basslink interconnector between mainland Australia and Tasmania, which was built by Siemens PTD and commissioned in 2006.

Siemens PTD and Dutch consortium partner BAM Civiel are supplying the converter stations for the project. The total value of the order to

the consortium is about r220 million. Commissioning is scheduled for late 2010. Siemens is responsible for supplying all the HVDC electronics and will be supplying both converter stations with key parts including converter valves, converter transformers, smoothing reactors, protection and control equipment and AC and DC filters. BAM Civiel is responsible for all earthwork and construction.

‘BritNed is another step towards an integrated electricity network for Europe’ said Peter Leupp, head of ABB’s Power Systems division. ‘We are proud to demonstrate that we have the technologies needed to modernise the European grid, stabilising supplies and increasing capacity.’

The choice of HVDC technology to transport electrical power over long distances derives from its inherently lower losses and its ability to allow power flows to be exactly controlled. In addition it is inherently more controllable because the technology prevents disturbances from spreading, making a significant contribution to the stability of the grid. ABB pioneered the technology in the 1950s, when the company built the world’s first commercial HVDC transmission link in Sweden. Since then ABB has supplied more than half of the world’s HVDC projects, providing an installed transmission capacity of more than 45 000 MW.

Experience in handling environmentally sensitive onshore and offshore locations was an important factor in choosing the contractors. Impact on the complex sediment dynamics and seabed topography of the North Sea has been established as minimal. Onshore, cable work will be restricted to specific times of the year to protect the flora and fauna of coastal breeding grounds and species habitats.

The link is essentially an infrastructure venture involving the construction and operation of the interconnector; BritNed will not buy or sell electricity. Power flows will be decided by companies that trade on BritNed and will be driven by factors such as the electricity demand profile in each country (for instance the inherent potential for demand levelling because of the one hour time zone difference) and the prices in each market.

Access to the capacity of BritNed will be through a combination of ‘implicit’ and ‘explicit’ auctions: implicit auctions – also known as market coupling or ‘exchange to exchange’ – allow buyers and sellers in each country to bid for capacity on a day ahead basis. APX has been retained to act as the implicit auction manager for BritNed and they will use the existing exchange facility in The Netherlands and extend the existing auction house in the UK.

Although the nominal capacity of the interconnector will be 1000 MW, capacity may be offered to the market at levels above 1000 MW when possible. It is expected that initially there will be a balance between explicit and implicit auctions but this will be continually reviewed.

The UK regulator, Ofgem, has decided to exempt BritNed from regulated third party access requirements and from Article 6(6) of European Commission Regulation 1228/2003, which relates to the use of revenues from the interconnector; specifically, it restricts the operator’s ability to take profits from ‘revenues resulting from the allocation of interconnection’. The decision is subject to a possible veto by the European Commission, and can be revoked in the future. In June 2006 BritNed submitted a formal application to the UK and Dutch authorities for an interconnector licence and for an Article 6/6 exemption and in September of that year Ofgem issued a consultation regarding BritNed’s application.