The radlab on wheels: a mobile radiochemistry laboratory

UK National Physical Laboratory (NPL) and Loughborough University are setting up a demonstration mobile radiochemistry laboratory that can be driven onto a nuclear site. Field tests are expected later this year. 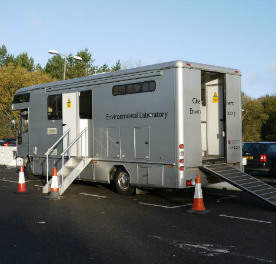 Work to decommission plant, buildings and contaminated land on legacy nuclear sites relies on accurately determining the activity concentrations of specific radioisotopes in the materials, so that demolition and waste disposal can be carried out safely and in compliance with site licence conditions.

Equipment and expertise for the complex measurements needed for decommissioning samples are the province of a small number of specialist analytical laboratories. As a result, these laboratories can be over-burdened with work, leading to long turnaround times of up to several months. The laboratories are also off-site, so radioactive samples often have to negotiate a time-consuming permitting and administrative process before they can be sent off for analysis.

As measurement results lie on the critical path for decommissioning projects this can lead to long delays, with the project team waiting for the results from the analysis before work can start on demolition or disposal.

"Results from the analysis will be in the hands of the project manager within hours rather than weeks."

The UK National Physical Laboratory (NPL) at Teddington has joined forces with Loughborough University’s radiochemistry section to develop a solution to this problem. Thanks to support from the Department for Business, Innovation and Skills and the EC, NPL and Loughborough are setting up a demonstration mobile radiochemistry laboratory that can be driven onto a nuclear site. Samples can be taken directly to the laboratory and the results from the analysis will be in the hands of the project manager within hours rather than weeks. If the results show that further samples are needed, they can be arranged immediately, which is far preferable to repeating a long cycle. A mobile laboratory also has the advantage that it can carry out essential measurements of routine discharges in the event that a site’s own laboratory is out of action.

Design of the mobile radiochemical laboratory

The vehicle was designed by the British Geological Society and is the property of Loughborough University. The vehicle itself is reconfigurable and has its own independent power supply and utilities. Equipment needed for a particular analysis campaign can be rapidly installed, and removed or replaced as required. Two technicians are needed to operate the installed analysis and measurement systems, with wireless data transfer to the NPL-Loughborough support team for further analysis and reporting.

The mobile laboratory has two distinct areas: one for sample preparation and the other for analysis and measurement equipment. The latter may include a high-resolution gamma spectrometer, a bench-top scintillation detector, portable radon gas detectors and non-nuclear measuring equipment such as balances and x-ray fluorescence (XRF), x-ray diffraction (XRD), SEM or GC-MS.

The mobile laboratory has become a realistic proposition only in the last five to ten years, due to technological developments such as automated radiochemistry.

Some radioassays can be very time consuming, as diverse techniques have to be employed to differentiate a range of radionuclides in complex environmental matrices. High energy gamma-emitting radionuclides (for example, Cs-137 and Co-60) can be detected directly in the sample but other common radionuclides (for example, Sr-90 and some isotopes of uranium and plutonium) need chemical separation from the sample and purification before measurement. This can take several days of bench chemistry, requiring highly skilled staff.

There is a potential solution to this problem. A US company (NorthStar Engineered Technologies) has developed a portable instrument for the US Air Force designed specifically to measure radioactivity in environmental samples. The instrument uses ion exchange resin columns to separate the different elements — a typical separation can be completed within an hour. The machine can be configured in different ways: you could run through a large number of samples to look for one particular radionuclide, or you could determine three or four different elements all at once.

NPL is working with its equivalent national measurement laboratory in Germany (PTB) to develop and validate the protocols for the instrument so that it can be applied reliably to typical samples for decommissioning or site clearance. Problems remain to be solved — sample preparation techniques are key — but the results are promising.

The main problem with sample preparation is converting material in solid matrices (soil, clay bricks, concrete) into solution for subsequent analysis; it is impossible to measure pure alpha and beta emitting radionuclides otherwise. A rapid and reproducible technique is to utilise commercially-available equipment for the preparation of XRF bead samples, such as the Katanax K2. This system uses lithium borate and metaborate fusion at ~1000°C to solubilise silicaceous (and other difficult to dissolve matrices) in a single, 20-minute step, rather than repeated extraction with aggressive and toxic reagents, such as hydrofluoric and/or perchloric acids.

Liquid scintillation counting is a useful and well-known technique for measuring radioactivity (particularly beta-emitting radionuclides such as tritium, C-14 and Sr-90) but it has the disadvantage that setting up and calibrating the counter can be a lengthy process. In addition, most commercial liquid scintillation counters have a built-in radioactive source that is essential for the measurement procedure, but which can cause regulatory problems when moved on or off a nuclear-licensed site.

"Liquid scintillation counting is a useful and well-known technique for measuring radioactivity…but setting up and calibrating the counter can be a lengthy process."

A recent EC-funded project has been addressing this problem. A new type of liquid scintillation counter uses the so-called ‘triple-to-double coincidence ratio (TDCR)’ technique to determine the activity in samples without the need for time-consuming calibration or a built-in source. The EC project resulted in a new miniature TDCR counter which is well suited for use in a mobile laboratory. A version has been commercialized by HIDEX.

Further work is in hand at NPL and Loughborough to develop novel measurement techniques that can be incorporated into the mobile laboratory. NPL and Loughborough are aiming to trial techniques in the field this year (2014) to demonstrate the potential benefits; the hope is that the mobile laboratory will be taken up by the nuclear industry and developed, in collaboration with partners, into a useful resource — not to rival fixed laboratories, which can handle far more samples — but to support specific projects.