The offshore climate is steady

Despite stalling in Copenhagen and uncertainty in the world’s money markets the mood of the German wind industry is bullish as it pushes ahead with one of the world’s most ambitious offshore generation programmes. 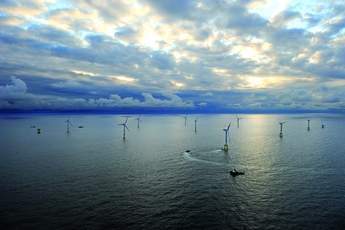 The breadth of German and European companies’ plans for wide swathes of wind generation in the country’s coastal waters is on an awesome scale, exceeded in ambition only by those of the UK. There are currently 80 planning applications for wind farms in the German North Sea and Baltic Sea. One of these, the alpha ventus (formerly Borkum West I) test site, has been finished and is producing power: another, Bard Offshore I, has made a start on construction and completed its specially constructed jack up vessel, although the start of work has been fitful and may not begin in earnest until early 2010.

What concerns every developer and owner right now is not the winter weather or the political climate but the financial outlook. Undoubtedly there have been some reappraisals in the face of potential financing difficulties, and in one case at least (Borkum West II) a rearrangement of the finance for what is admittedly a very substantial project. In this case the wind farm has been carved in two, with one 200 MW stage now put off until financing conditions improve. But there is little sign yet of the mass exodus, or at least the mass standstill, that was being predicted in some quarters at the beginning of 2009 although there is little doubt that some projects have been effectively put on hold by simply slowing down the early stages. Meanwhile there is evidence that projects are being pushed forward as planned. EnBW for instance has signed a contract with Siemens for the supply of 21 SWT 2.3-93 wind turbines for its 48 MW Baltic 1 site. Siemens has also signed an agreement with Airtricity, the renewable energy division of Scottish and Southern Energy, for the supply of 80 wind turbines for its 288 MW Butendiek OWF, due to be commissioned in 2012.

Germany offers favourable framework conditions for the installation and operation of OFWs. The government has set a target of 25 000 MW of offshore wind power in the year 2030, and set an attractive feed-in tariff – the Butendiek wind farm for example will receive a feed-in of 15 Eurocents per kWh – and the transmission system operator is obliged to connect the wind farm to the grid on time. The singling out of some technically advanced projects by the EU for funding support, including r53 million to Ocean Breeze Energy to support the innovative BARD Tripile foundation system and the production and installation of an innovative cable in-feed for its 400 MW BARD 1 project, and the announcement that the R&D effort for a European ‘supergrid’ to link renewables resources in the Baltic and North seas will also attract funding, has given a boost to the industry.

Other German project beneficiaries under the EU’s recovery scheme include Wetfeet Offshore Wind Energy and Strabag Offshore Wind, developers of Global Tech I who will get r58.55 million for their work on gravity foundations for deep water wind farms using efficient serial manufacturing and fast installation processes. Essent Wind Nordsee Ost will get r50 million to support the development of an innovative logistics and installation concept for the installation of 6MW wind turbine generators with jacket foundation structures in challenging offshore conditions, and Trianel Windkraftwerk Borkum (Borkum West II) will receive r42.71 million for the installation of innovative 5MW wind turbine generators on tripod foundations.

Table 1 lists current projects inlcuding those in what is usually called the first construction phase, meaning the post-consent stage when negotiations and signing of contracts for turbines and building works takes place and a working date for completion and first power is known. The dates in brackets are when construction is expected to start. Many more sites, that are either of unknown completion date or still in the consenting stage, are not included in this table.

Germany’s first offshore wind park, the alpha ventus site, aka the German Offshore Test Field and Infrastructure GmbH, or DOTI, has been completed and is producing power. The consortium of EWE, E.ON and Vattenfall successfully installed its twelfth and last wind turbine in Germany’s North Sea, 45 kilometres north of Borkum island, in the late summer. During early 2010 the last of the turbines will be connected, weather permitting. The entire time required to complete all twelve turbines was under seven months, making alpha ventus the world’s first offshore wind park to employ a dozen 5 MW class wind turbines. Six turbines are already being test run and have so far supplied around 13 million kWh to the German grid. The sums invested by EWE, E.ON and Vattenfall for this pioneer project amount to r250 million.

For EWE, E.ON and Vattenfall as well as for the numerous contractors, the harsh conditions in the North Sea provided a true test for the feasibility of offshore wind power in Germany. “The construction of twelve 5 MW wind turbines 45 km from the shore in waters 30 metres deep is a true piece of pioneering achievement and is the first of its kind worldwide” said overall project director Wilfried Hube of EWE.

After initial difficulties with the construction vessels in 2008, the lessons learned were put to use straightaway with the selection of more suitable equipment in 2009, which kept the project on schedule. Vattenfall’s Oliver Funk, who is also a DOTI manager, said: “We learned that the construction process and the employed logistics must be very well attuned with one another in order to be build effectively. In this regard we faced a very steep learning curve.” During peak construction of alpha ventus in summer 2009, around 350 people and up to 25 different ships were simultaneously at work on site. Among these vessels were three brand-new jack-up barges that had arrived at alpha ventus almost directly from the shipyard for their first offshore work as well as the largest crane ship in the world, Thialf, that installed the jacket foundations for the six REpower wind turbines in only six days.

The construction of alpha ventus was far more complex than was the case with previous offshore wind parks, which were all built outside Germany. The concept at the heart of the project is the reason for this: two types of German-manufactured wind turbines were built on two different types of foundations using various construction concepts.While the twelve wind turbines were being completed, the first six units were already being test run and generating power.

BARD Offshore 1 is a 400 MW offshore wind farm presently under construction in the German North Sea and is expected to be fully operational by 2010. It will be an 80-turbine facility, located 100 km northwest of the isle of Borkum, in water 40 metres deep.

Laying of cables to connect the wind farm started on July 23, 2009 and was completed in the autumn. The 200 km connection is the longest connection to an offshore wind farm in the world. The construction of the turbines began in 2009 and is expected to be completed at the end of 2010. Construction is assisted by the purpose-built Wind Lift 1 barge/platform, which places the 470 ton, 21 metre foundations on the sea bed.

The turbines generate AC at a voltage of 3kV. They are grouped in clusters and interconnected by means of medium voltage cables. A cluster consists of a bundle of up to eight turbines, which are, in turn, connected to the energy platform, the heart of the wind farm, where the voltage is transformed up to a level suitable for transmission to shore, mainly to reduce transmission losses.

The generated electric power is then transmitted to the public grid over a distance of about 180 km. This requires around 100 km of submarine cable and 80 km of onshore cable to be laid. There were challenges to be overcome, among which crossing the island of Norderney was an outstanding example. An innovative concept was developed to ensure that all pilot offshore wind power projects in the western North Sea can be connected via a very narrow cable trench across the island of Norderney.

To provide secure and steady power plant and energy platform operation at a distance of more than 100 km off the coast, an offshore control centre with full-time personnel and living quarters was required. Its staff will be there to ensure that the facility is in continuous operation 365 days a year, 24 hours a day. All spare parts required for maintenance and operation are available there, so that staff can be swiftly transported to the wind energy converters from the platform, even in unfavourable weather conditions, and thereby guarantee high availability.

“With the building of alpha ventus, our three companies have shown that offshore wind energy is technically feasible in Germany, even under considerably difficult conditions. The entire team can be rightly proud”, says

A total of 80 ‘BARD 5.0’ WECs, 5 MW each, constitute a 400 MW power plant. Together with experts in HV power transmission, BARD Engineering GmbH has developed its own grid coupling concept.