There is no clearer indication of the North Sea’s declining production than the curtain call for Brent, the field that gave the UK’s benchmark oil price its name. But with around £50 billion of investment to come over the next 30–40 years, decommissioning also represents a significant opportunity for the UK’s oil and gas supply chain. 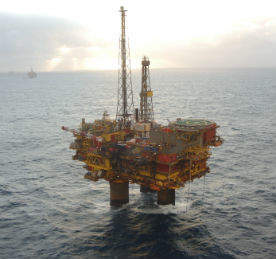 Lying far to the north-east of the Shetland Islands, Brent was one of the UK’s earliest and largest projects. Discovered in 1971, all the platforms were on stream by 1976. Production peaked in 1982 at around 500,000bpd, and a £1.3-billion development project to lower reservoir pressures saw Brent become predominantly a gas field in the mid-’90s.

Over its almost-40-year lifetime, Brent produced over two billion barrels of oil and almost 6tcf of gas – that’s 10% of all the UK’s oil and gas to date, and a massive £20 billion in tax revenue.

Now, Brent Charlie is the sole remaining producer. Brent Delta ceased production at the end of 2011, with Alpha and Bravo halting in November 2014. Decommissioning them will cost somewhere in the region of $6 billion – and when you see the scale of the task, you can understand why.

With a combined weight of more than 100,000t, Brent’s four topsides sit on three concrete gravity-base structures (GBS), weighing in at around 330,000t each, and a 28,000t steel jacket. Then there are 103km of pipelines, 140 wells and 64 oil storage cells, each taller than Nelson’s Column in London and with the capacity of four Olympic-sized swimming pools.

It doesn’t actually matter hugely when we do the lift. Safety, cost-efficiency and environmental impact are paramount.

Shell and joint-venture partner ExxonMobil started planning Brent’s decommissioning in 2006. So far, it’s involved around 300 major studies, with independent review of all engineering and scientific work. Learning the lessons from the Brent Spar debacle, the company solicited input from a wide range of contributors.

"We’ve engaged with the wider world: with academia, government departments, other operators and the supply chain," says Alistair Hope, Shell’s project director of Brent decommissioning. "In total, we’ve talked to over 400 stakeholders in 180 different organisations to get their views and ideas."

Ahead of the main programme, DECC approved Shell’s plan for the removal of Brent Delta’s topside in July 2015. The key decision here was to remove all 24,200t of the topside in a single lift and then dismantle it onshore. The in-situ alternatives were piece small decommissioning – chopping it up into small chunks – or reversed installation – disassembling it module by module using heavy-lift vessels.

"For both of those options, we were looking at three-year campaigns with as many as one million man-hours offshore," explains Hope. "With lots of cutting, lifting and manual handing, that would be a very high-risk approach – plus the extra exposure that flying all those people out there entails. Hugely complex integrated platforms like Brent Delta are far better dealt with onshore, and that also offers greater scope for using automated machinery."

Taking care of the lift will be Allseas’ Pioneering Spirit, the world’s largest vessel by gross tonnage, breadth and displacement, which weighs in at 900,000t. Launched in 2013, the finishing touches are now being made to the giant catamaran and its 48,000t-capacity topside lifting system (TLS) in Rotterdam.

Just prior to removal, Shell will cut through the bolts and grout that connect the top of each leg to the riser supports for the topside. The topside will remain stable and in place, through a combination of friction and the use of shear restraining supports bolted inside the legs, which will prevent any lateral movement.

With a 59m gap between its bows, Pioneering Spirit will then float into position around Brent Delta’s concrete legs. It will extend beams supporting 16 motion-compensated hydraulic arms under the deck. Cruciform lifting points attached to the deck’s underside mate with pads attached to the top of each pair of arms.

Next, the vessel is deballasted and rises in the water. When it is taking almost all of the load, the TLS’s set
of giant forklifts will raise the topside 3m in ten seconds. With further deballasting, this takes the topside well clear of the legs in under a minute. After the 388-mile voyage to Able UK’s facility in Hartlepool, Brent Delta will be transferred to a cargo barge for the final part of its trip.

"We’ve reviewed their design for the ship, there have been extensive test tank trials of the lifting system, and we’ve witnessed the sea trials along with the independent verifiers and marine warranty surveyors," says Hope. "The use of ballast systems is a well-tested method in the industry, so we’re confident that the system will work – but all these steps allow us to perfect it."

A test lift using a specially built 5,000t platform will take place in Dutch waters in the first half of this year. Pioneering Spirit also has one big job to complete first: Talisman’s 13,000t Yme platform in the Norwegian sector.

"We hope to witness the Yme lift and learn from that," says Hope. "In decommissioning, there’s been close cooperation between the operators, regulators and supply chain."

Unlike new production platforms, this project has no target date for the lift. With the traditional North Sea weather window for heavy lifts still required, it might happen in 2016 or 2017.

"It doesn’t actually matter hugely when we do the lift," says Hope. "Safety, cost-efficiency and environmental impact are paramount."

In 2015, Shell and its contractors were busy installing the 120t of steel needed for the lifting points on Brent Delta’s underside. Work on reinforcing internal module walls continues, but Shell has already finished plugging the platform’s 40 wells.

"We’ve poured about 1.7 million litres of concrete into those wells," says Hope. "We’re about two thirds of the way through that work on Brent Bravo."

Many of Brent Delta’s wells took significant effort due to their age and complexity. Plugging the first well took 50 days, but this was reduced to 35 days by the final well.

Plans and studies for the rest of the Brent infrastructure are still maturing. Pioneering Spirit will remove the other three topsides whole, as well as Brent Alpha’s steel jacket, but leaving the three GBS foundations in place looks the most likely recommendation by Shell, backed by its independent review group. There’s no firm decision yet on what to do with the legs: they may yet be cut 55m below the waterline once the topsides are removed.

"No one anticipated that we would be decommissioning these when they were installed in the ’70s," says Hope. "It would be an extremely difficult and high-risk operation to refloat them, as they may well fail in some way. We would have to make a case to leave them behind."

This is permissible under exceptions to OSPAR Commission Decision 98/3, which mandated the removal of defunct offshore structures. Although small, 15,000t tanks in shallow water were successfully refloated
at Schwedeneck-See over a decade ago, much larger deepwater concrete structures at Frigg and Ekofisk have been left in place.

Shell also needs to decide whether to cut Brent Alpha’s jacket legs at the mudline or higher up, above the footings. Footings make up the bottom quarter of the jacket, and they tend to be much thicker steel and are often full of grout.

"They are much more difficult to cut, and are another potential derogation category in the OSPAR regulations," explains Hope. "They saw that the footings of very large jackets like Brent Alpha might have to be left behind."

Subject to approval, the piles of drill cuttings on, in and around Brent Delta’s GBS are also likely to stay. The same goes for larger concrete-coated and buried pipelines and flowlines, after being flushed through and capped. The Brent pipeline system that exports oil from other fields will continue to operate, as will the FLAGS gas pipeline.

If you think about the creativity, innovation and brilliant engineering that was needed to put those platforms out there in the mid-’70s, we need all that and more to handle their decommissioning.

Brent Delta’s vast storage cells were surveyed in 2014. Almost all oil and emulsion will be pumped from them prior to topside removal. At a later date, a final vessel-based subsea programme will drill into the cell tops and remove any remaining oil.

Finding cost-effective solutions for decommissioning challenges like this is a great opportunity for service companies to innovate – take the large-scale diamond wire cutting needed to slice through Brent Delta’s legs, for example. Hope points to tasks like section milling – used to remove casing prior to creating cement barriers during plug and abandonment – that could benefit from further development.

"A safer, faster and cheaper way to remove casing efficiently with less handling of swarf would be helpful," he says. "If you think about the creativity, innovation and brilliant engineering that was needed to put those platforms out there in the mid-’70s, we need all that and more to handle their decommissioning."

That work will give the North Sea industry one last big boom: there are 470 platforms, 10,000km of pipeline and 5,000 wells to be decommissioned over the next 30-40 years in the UK. Much of the spending will flow directly to skilled staff, with the Brent project currently employing 1,500 workers.

Significant investment to strengthen Able’s Hartlepool facilities is another example of how decommissioning can create, as well as cut, employment. With 1,200 piles supporting a giant concrete pad and front wall, this will be the strongest quay in Europe. Construction supports around 100 new jobs, with a further 100 created during each decommissioning project.

Nonetheless, the end will still be a bittersweet moment for the platform’s veterans. When Brent Delta comes onshore, they will be able to visit with their families and say goodbye to a place that many of them will have spent much of their adult lives – But they will at least be going out on a high.

"On Brent Delta at the moment, there’s good morale," says Hope. "They are involved in a really special project – the world’s heaviest lift – so they feel that’s a fitting end for their platform."