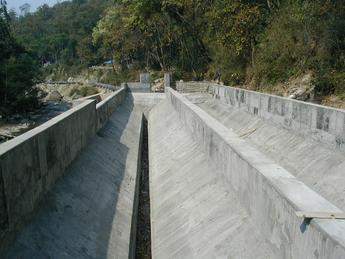 On 30 August 2003, Arun Valley Hydropower Development Company completed construction of its 3MW run-of-river Piluwakhola hydro project on the Piluwakhola river in the Sankhuwasava district of Nepal. Construction of the project, which will generate 19.55GWh annually, was possible as a result of the Nepalese government’s liberal policy to involve the private sector in hydro development in the country, following the restoration of democracy in 1990.

Capital costs for power generation for this project are about US$1,250 per kW, which makes it one of the cheapest projects in Nepal. The benefit cost ratio and internal rate of return are 1.74% and 25.8%, respectively. The total investment is estimated to be US$3.9M, at 2002 prices. Of the total cost, US$1.3M was raised from the shareholders and the remaining US$2.7M has been loaned by Nepali banks and financial institutions, led by the Bank of Kathmandu.

It utilises the water of Piluwakhola, which is a spring fed river. The gross head of the project is 112.5m and design discharge is 3.5m3/sec..There is 6m long side intake with free flow diversion weir 16m long, and three manually operated gates. The water from intake is conveyed by 185m long penstock and 50m long RCC power canal to a 47m long desanding basin of dufore type.

During construction, the traditional method of manually breaking hard rocks was used, instead of explosives, in order to protect the environment.

The construction of this project in Eastern Hilly region was needed to provide a reliable source of electricity to the local people. The energy generated from the project will be sold to NEA (Nepal Electricity Authority) at cheaper price and the transmission losses will be minimised while electrifying the remote hilly districts of Eastern Nepal.

The civil contractor for this project is Marushin Shitaka Construction Company Inc. Japan, through it’s liaison office in Nepal. The metal contract was awarded to Nepali company Machhapuchere Metal and Machinery Works Company Ltd, based in the Pokhara Industrial district. The civil contractor is responsible for constructing the structures including the intake, desander basin, saddle supports, and forebay. The metal contractor is responsible for fabrication, cleaning and painting, and site erection of penstock pipe. All the gates and other steel structures in the intake, and desander and wye forgates in the power house, are manufactured by the metal contractor.