The Chinese in Africa – an electrifying story

A new International Energy Agency report shows that Chinese companies are leading the way in the electrification of sub-Saharan Africa. 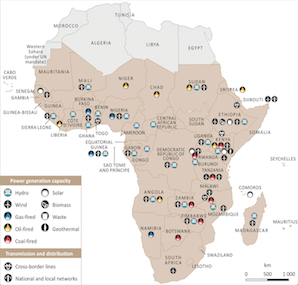 The IEA Partner Country series publication*, Boosting the Power Sector in Sub-Saharan Africa: China’s Involvement, is the first to study in depth the activities and impact of Chinese companies in Africa’s power sector development. It assesses the type of projects developed, the financing used, the technologies employed and the impact on generation, distribution and transmission capacity. The report also includes case studies.

At present, various global initiatives promote increased prosperity and economic development in Africa by improving electricity security. The Power Africa initiative by the United States, the Africa-EU Millennium Development Goals initiative, the Tokyo International Conference on African Development (TICAD) process by Japan, the Sustainable Energy for All initiative (SE4ALL) by the United Nations, and the India-Africa Forum Summit (IAFS) are good examples of efforts by the global community to support and promote economic growth in Africa. In this context, the active role of Chinese companies in Africa’s power sector is significant, both in terms of magnitude and impact on new electricity capacity additions. These are mostly coming from renewable energy sources, including large hydroelectric plants.

In line with the IEA’s policy of further opening its doors to emerging economies and becoming a global hub for clean energy technologies, it is dedicated to supporting Africa’s electricity sector development. With more than 1 billion inhabitants and vast energy resources, the region needs better and wider access to energy to sustain its economic growth and improve living conditions. The deployment of renewable energy such as hydro, solar, and wind can further enable economic development in Africa. Given Africa’s rich energy resources, the potential is huge.

Due to the scarcity of capital and other factors, access to electricity in sub-Saharan Africa still lags behind the rest of the world. Economic growth and living conditions are severely constrained by a lack of power generation, transmission and distribution capacity. Over 635 million people in the region, around two thirds of the population, live without electricity. The sub-Saharan Africa power sector needs greater access to capital funds, technologies and capacity building. Significant investments are needed to support power sector development, and ultimately enable economic breakthroughs.

Power projects built by Chinese companies in sub-Saharan Africa have contributed significantly to the region’s power sector capacity expansion in recent years. It has become an important source of financing in Africa. Chinese engagement in power covers all primary sources except nuclear, and all sizes of projects, while donors from Organisation for Economic Co-operation and Development (OECD) countries tend to avoid financing large hydropower dams or coal- fired power plants.

The IEA report analyses China’s engagement in the sub-Saharan Africa power sector by examining its recent and planned support for power projects in the region over the 2010-20 period. It provides an overview of Chinese projects based on a unique dataset, and highlights the current status and major trends of these projects in the first-ever consolidated effort to map them. The study also identifies key Chinese stakeholders and assesses implications for development in sub-Saharan Africa.

In power transmission and distribution, Chinese companies are active in the entire power-grid chain, from cross-border transmission lines like that between Ethiopia and Kenya, to local urban and rural distribution networks, such as in Angola or Equatorial Guinea.

Projects by Chinese companies cover almost the entire electricity mix, but are dominated by hydropower. Renewable sources account for 56% of total capacity added by Chinese projects between 2010 and 2020, including 49% from hydropower. Chinese-built greenfield projects increase the diversity of the sub-Saharan Africa power capacity mix and accelerate the development of renewables in the region (wind, solar, biomass and hydropower).

In some countries, such as Ethiopia, Chinese projects in biomass and waste-to-energy are unique in the region. Moreover, new hydropower dams such as those in Gabon or Zambia, and other renewables projects in Senegal and South Africa, have helped avoid carbon dioxide emissions. Hydropower has also played an important part in the early stages of electrification in several other regions of the world, even though concerns over large dams, including environmental and social impacts, must be addressed.

A substantial proportion of Chinese power projects in sub- Saharan Africa are aimed at expanding access to electricity. Over the period 2010 to 2020, a total of 120 million people will gain access to electricity through the power grid, enabled by grid development and increasing power generation capacity, of which Chinese contractors are responsible for 30%. Expanded access to electricity can in turn facilitate industrialisation and economic development. China also supports rural off-grid solutions with solar energy kits donated in countries like Rwanda and Comoros.

China’s involvement in Africa bolsters the Chinese government’s ‘going abroad’ strategy, while the current economic slowdown in China and overcapacity in various sectors is impelling Chinese companies to search for new markets overseas.

Over 90% of Chinese-built power projects in the region are contracted by Chinese state-owned enterprises (SOEs). Africa is the largest overseas market for some major Chinese energy infrastructure SOEs, which provide integrated services centred on turnkey projects. Africa’s industrialisation and economic development is seen by Chinese stakeholders as important for exports from China of manufactured goods in the region.

Generally with their government’s support, Chinese stakeholders provide integrated solutions in power generation capacity and in transmission and distribution through a combination of Chinese development assistance (loans), government-driven investment and equity investment. China’s approach to development assistance differs from OECD countries. For example, China is not covered by the Arrangements on Officially Supported Export Credits, which guides OECD countries in export credit financing.

In the 2010-15 period, loans, buyer/seller credits and foreign direct investment (FDI) from China for sub-Saharan Africa power sector development (generation and T&D) amounted to around $13 billion, or around one-fifth of all investments in the sector in the region. Most power facilities built by Chinese companies are financed by Chinese stakeholders, essentially through public lending from the Export-Import Bank of China (Exim Bank). Construction costs of power plants built by Chinese builders are lower overall than in other parts of the globe but higher than those for plants built in China.

Although sometimes challenging in the absence of reliable power off-takers, project financing is increasingly diversified and moving progressively away from public lending. The majority of Chinese-built power projects are still financed by sovereign loans guaranteed by African governments.

As more Chinese commercial banks and funds enter the market, the development lending model is trying to progressively switch to more equity financing. Some Chinese companies operate as independent power producers, as in Ghana.

The success of power projects depends on the ability of African governments to negotiate, implement and maintain them. Outside China, stakeholders from other countries can also significantly contribute to African power sector development, but the overall success of Africa’s electrification ultimately remains dependent upon leaders of African countries.