In a preview to the updated country profiles section of our Yearbook 2005, Pierre Fortin, executive director of the Canadian Hydropower Association, gives an overview of current and planned hydro power projects in Canada 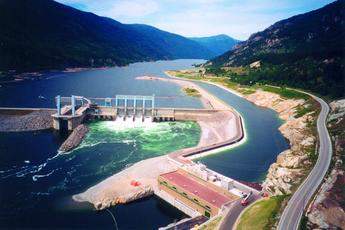 THE very geography of Canada has led to the Canadian energy industry’s expertise in the generation and transmission of electricity, in particular clean, reliable and renewable hydroelectric power. The paradox of Canada’s vast geography is that it poses an energy supply problem to the 32M people scattered over 10Mkm2, while at the same time offering a solution to the energy demands of its inhabitants. One of the least densely populated countries in the world, with a rigorous climate and large distances between population centres, Canada has been graced with water, whether falling, running or still water, and thus water-based power ready to meet Canada’s relatively high per capita energy use.

Canada is home to some of the largest and most powerful hydro power facilities in the world: the 5429MW Churchill Falls underground power plant in Labrador, the 5328MW Robert-Bourassa Complex near James Bay, Québec, and the 214m high Daniel-Johnson arch-and-buttress dam on the Manicouagan river in Québec, to name just a few.

There are 475 hydro power plants in Canada, of which 233 have a generating capacity of more than 10MW and represent 99% of total hydro power capacity.

Canada generates about 353TWh/year of hydro power, which is close to 60% of its total electricity production. With an installed capacity of 69,205 MW (2002), Canada is the world’s biggest producer of hydro power. Leading the US, Brazil, China and Russia, Canada’s output is nearly 13% of the global output of hydro power.

New opportunities
In addition to existing facilities, Canada has many opportunities for new hydro power project development. Approximately 118,000MW of hydro, twice the amount that is currently in operation, could technically be developed. The three territories and all the provinces, except Prince Edward Island, hold some remaining potential. The provinces of Québec, Manitoba, British Columbia, and Newfoundland and Labrador in particular hold significant potential for development.

Several recent agreements signed with aboriginal communities will increase cooperation and partnership for the development of new schemes. In the Province of Québec, an agreement was signed in 2004 between the Cree Nation and Hydro-Québec, whereby the utility agreed to facilitate the participation of the James Bay Crees in hydroelectric development through partnership, employment and contracts. In Manitoba, the Nisichawayasihk Cree Nation will be an equity partner with Manitoba Hydro in the development and operation of the planned Wuskwatim Generating Station on the Burntwood river. The low head design of Wuskwatim will produce 200MW, while flooding only 0.5km of land. The planned project start date is January 2005.

Across Canada, several other new projects are being planned, such as the Waneta Hydroelectric Expansion Project (435MW) in British Columbia; the Eastmain 1A (5.6TWh), La Romaine (1500MW), Chute-Allard and Rapides-des-Coeurs (138MW) in Quebec, and Gull Island in Labrador.

Refurbishment
Québec has four refurbishment projects in the works: Outardes-4 (56MW), Outardes-3 (254MW), La Tuque (51MW) and Bersimis-1. On the East coast in British Columbia, the Brilliant Expansion project, scheduled for completion in 2006, will generate up to 120MW.

An important refurbishment project is underway in Ontario: the Niagara tunnel project will add a third water intake tunnel to supply existing generating stations, which will produce an additional 1.6TWh per year when the project is completed in 2009. In Manitoba, the Kelsey project consists of refurbishing all seven units with a projected increase of 11MW per unit, representing an overall 30% increase in output. The work should be completed by 2015.

Notwithstanding these delays, the development of new hydro capacity has become a matter of urgency. Over the next two decades, the demand for electricity will increase on average 1.3% per year. The question is how to meet Canada’s electricity needs without compromising the environment. Growing concerns about greenhouse gas emissions, which have been identified as the cause of global warming, together with increasing recognition of hydro power as a clean and low-emitting source of electricity, put further hydro development in a very good light.