A Greenpeace stunt in October 2012 that saw activists swarming into two Swedish nuclear power plants has touched a nerve. 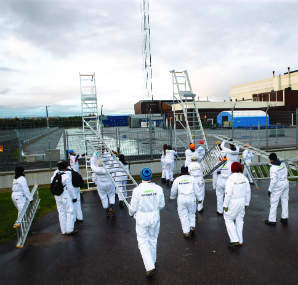 Teams of Greenpeace activists wearing white coveralls invaded the Forsmark and Ringhals nuclear power plants in October 2012. At Ringhals, 20 activists climbed an outer perimeter fence, lifting over bicycles that they rode around in front of an entrance. At Forsmark, 50 used special ladders to climb over security fences. Greenpeace said that its actions, which were nonviolent, were intended to protest against the continuing operation of these reactors, which it argues were shown to be unsafe in European stress tests. It also wanted to highlight that stress tests did not address preparedness against external threats.

The Swedish nuclear regulator SSM concluded that the plants’ security systems worked as intended; when the activists entered the area, they were detected, and most were detained immediately. The Forsmark incursion was more significant, says control and protection specialist Stig Isaksson of the Swedish nuclear regulator (SSM), because several activists made it into the nuclear power plant’s protected area, where they hid undetected for several hours. At Ringhals, activists did not attempt to enter the protected area.

The actions of Greenpeace activists have put pressure on the utilities, the Swedish ministry of the environment, and the Swedish nuclear safety regulator (SSM). It was the second set of Greenpeace incursions in as many years; activists invaded Forsmark in June 2010 to protest the then-plan to remove the government prohibition on nuclear new-build.

In October, the regulator called in the chief executive officers of utilities OKG (Oskarshamn) and Vattenfall (Ringhals and Forsmark) to discuss short-term and long-term plans, and the ministry of environment hosted two similar meetings in October and November 2012. Isaksson would not go into detail about the plans proposed to increase security at the sites, which he said were confidential, but he did say that the plants are likely to make changes to access areas around the site, and also build vehicle checkpoints.

He said that ‘some’ of the actions proposed by the utilities were similar to a critical review of nuclear site security published by SSM in January 2012, a report which was written in response to the first Greenpeace incursions in 2010 (English summary via www.tinyurl.com/swdnuksec).

The report, Review of the capability of licensees and the State to protect nuclear facilities and transports of nuclear material against antagonistic threats, said that "the current overall level of protection against sabotage is insufficient". Although nuclear power plants have security guards, the armed force responsible for emergency response is the police, whether local, regional or national. The report criticised the cooperation between site staff and police in case of an attack: "Successful overall protection presupposes that the measures of licensees and the police are coordinated, thus preventing a gap from arising and giving an antagonist the potential to succeed with its intended sabotage of a facility, for instance. This kind of coordination is currently non-existent; as a consequence, licensees are uncertain when they can count on police officers arriving to take action and in its turn meaning that they also do not know how they should dimension their protective measures to delay an attack."

The SSM report recommended improving the response capabilities of the police, and in particular to shorten response times, and called for increased penalties (such as prison time) for trespassers. But other proposals were controversial. The report states that the SSM advocates improving the capabilities of the nuclear power plant-based staff to deal with violent antagonists by immediately taking action. But it also includes a dissenting statement from the National Police Board, which said it ‘cannot currently see it as justified’ to further investigate the capability to immediately take action against a violent attack; instead, the Board views the work to delay an attack and to secure a facility as being of higher priority.

Isaksson said that there were two types of regulatory changes affecting security that are likely to happen in Sweden. Following publication of its 2010 report, SSM has continued to reevaluate existing regulations, work which is likely to result in a public consultation ‘after the summer’, Isaksson said. These changes are only within the domain of existing legislation, but would require stronger security measures, including installing a limited access area.

He said that other changes would require changes in legislation or political decisions, such as the need for an onsite armed response force. By law, guards at Swedish nuclear power plants are not allowed to carry guns (called ‘service pistols’ in the report). Isaksson said that SSM study visits to plants in Switzerland, Germany and Finland, and detailed talks with the UK and France have shown that all of these countries have some armed capabilities. "There is a clear need to establish that capability in Swedish plants as well." As of late January, the Swedish government had not responded formally to the report, Isaksson said.

Edited videos of the incursions have been posted on youtube and can be reached by the redirects below: