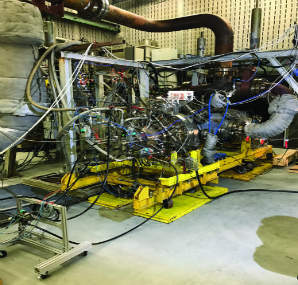 Recent FlameSheetTM test campaigns at DLR have focused on design concepts for liquid fuels, further improvements in turndown and proving of flameholding prevention capabilities (particularly when using “exotic” fuels that may be prone to flashback and autoignition).

PSM, now part of Ansaldo Energia, says the DLR facilities offer test conditions “equivalent to those used by the OEMs”. The test rig used for the FlameSheetTM combustor tests provides full F class baseload operating conditions, with air flow up to 27 kg/s, pressure up to 24 bar, inlet air temperature up to 920K, exhaust temperature up to 1650K, with access to a wide range of fuels.

Overall rig control, including supply of a wide range of fuels (both gas and liquid), as well as air, at the required conditions – with the ability to rapidly change fuel composition – is the responsibility of DLR, while extensive instrumentation and dozensofscreensenablePSMtocontroltest boundary conditions, hardware integrity, emissions and combustion dynamics.

Side by side performance tests on the DLR rig have enabled the FlameSheetTM combustor to be benchmarked against incumbent OEM burner technologies, including 7F DLN2.6 and W501F DLN.

The rig tests have demonstrated that FlameSheetTM combustors are able to achieve less than 9 ppm NOx over the entire load range (down to 5 ppm and less with PSM’s AutoTune system), as well as CO below 9 ppm, but with greatly improved turndown capabilities, down to 30% load on standard firing curve in the case of a 7F for example, while still maintaining emissions compliance (largely thanks to the “combustor within a combustor” concept of FlameSheetTM).

Using a range of exotic fuels made available at DLR, the inherent fuel flexibility of the FlameSheetTM combustor – with no diluents or steam injection required – has also been amply demonstrated (see table below), including dual fuel capability.

With its robust mixing characteristics the FlameSheetTM combustor is able to tolerate a large (30%) variation in MWI (Modified Wobbe Index, a normalised measure of fuel flexibility). DLR rig tests have confirmed, for example, that low NOx levels are maintained over a wide range of MWI levels.

High premixer exit velocities mean that FlameSheetTM is able to avoid flashback and cope well with highly reactive fuels such as H2, with levels as high as 65% investigated at the DLR rig in F class conditions.

Lowest achievable NOx levels at baseload recorded on the Longview machines and on the DLR rig matched closely. The FlameSheetTM equipped engines achieved below 5 ppm for all operating points from baseload down to 25% of load, with 20% increased turndown at reduced engine exhaust temperatures.

Illustrating the benefits of rig testing, the DLR installation has been able to demonstrate FlameSheetTM’s promising NOx capabilities in “overfire” conditions, ie when turbine inlet temperatures are increased beyond 7FA baseload levels. This has shown, for example, that when FlameSheetTM is overfired by 140°C beyond 7FA baseload turbine inlet temperatures, NOx is maintained at around 12 ppm (at 15% O2), which bodes well for potential applications of FlameSheetTM in H and J class turbines.

Additional confirmation of FlameSheetTM performance in an operating machine has come from Ansaldo Energia’s validation trials of the new GT36 gas turbine in its Birr test power plant in Switzerland.

FlameSheetTM is used in the first of two burner stages employed in the sequential combustion system of the GT36 (see Modern Power Systems, August 2016, pp 12-14).