Testing the water with CFD

As part of its re-licensing process, computational fluid dynamics was used at Smith Mountain dam to identify how the structure would cope during a probable maximum flood 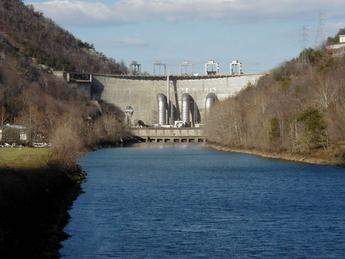 Smith Mountain dam is located on the Roanoke river, near Roanoke, Virginia, US. It is a double arch concrete dam with a base thickness of 9m, a height of 71.5m, and top width of 249m. Constructed in 1966 with 133,805m3 of concrete, the dam is part of a pumped storage project that also includes Leesville dam.

Smith Mountain lake is approximately 64km long, with 804.5km of shoreline and a full pool water surface elevation of 242m asl. Smith Mountain dam has two ungated overtopping spillways, each with a total clear opening of 30.5m. A pier at the mid-span of each spillway supports the roadway across the spillway opening, and the spillway crest has an elevation of 242m. Water passing over the spillway free-falls through the air before entering the catch chute, which was structurally designed to minimise the force of the water’s impact.

Since the estimated flow during a PMF greatly exceeds the dam’s original design flow, FERC was concerned that the increased flow during this event would cause the free-falling water to overshoot the catch chute and adversely affect the structure.

Building a reduced scale physical model of the dam and implementing a laboratory test program was one option, but this would have cost AEP approximately US$200,000 and required six to eight months to complete, and thus was deemed unfeasible.

As a result, AEP employed the consulting group Alden Research Laboratory, Massachusetts (Alden), to model the flow characteristics of the dam’s spillways during a PMF event.

Alden used a combination of historic physical modelling results and the computational fluid dynamics (CFD) program Flow-3D to obtain its results while minimising project costs and schedule. Alden projected flows as high as 3396m3/sec with an associated pool elevation of 250m, which would exceed the 247.5m pool level for which the dam had been originally tested. AEP asked Alden to determine the trajectory of the flow at these higher flow rates.

As part of a physical model study it conducted over 45 years ago, Alden evaluated the dam’s original spillway design and performance at lake levels up to 247.5m asl, where the spillways pass 1415m3/sec.

In 1960, Alden used the test data to determine optimum spillway geometry. The modern simulation results showed that even the high flows associated with a PMF would not result in water trajectories that extend past the spillway’s catch chute

Alden did consider building a physical model, but the time required to construct and test such a model would have made it difficult or impossible for AEP to meet the FERC deadline for certifying dam performance under the PMF. To meet the schedule requirements, Alden engineers decided to use CFD for the modelling with historic physical model data providing the necessary validation.

The CFD simulation was very challenging, primarily because of the complexities involved in numerically modelling severely deformed free surfaces – i.e. the free flow of water through air. In this case, the water free-falls over 30.5m before entering the catch chute. Alden engineers revisited the photographs of the original reduced scale model tests of the dam and determined that the free-falling water largely remained in a coherent mass instead of breaking into clumps and droplets. This allowed Alden to disregard the effect of the air on the water, simplifying the necessary simulations.

Most CFD codes have the capability to model free surfaces. Typically, they require computation of both the water and air motion in order to simulate the deformation of the air/water interface. To obtain a sharp interface between the water and air, these codes require the use of very fine computational meshes and higher order numerical methods. Computing the flow in each cell over the extent of the solution domain, including air, requires significant computing resources and large computational time.

The CFD code that Alden used, Flow-3D from Flow Science Incorporated, models only the water component of the flow while ignoring the motion of the surrounding air. When the free-falling water passes through the computational cells, the code calculates its motion. The Flow-3D code allows cells where no water is present to drop out of the computation, dramatically reducing the time it takes to reach the desired solution. Flow-3D uses the volume of fluid (VOF) method to simulate free-surface fluid motion, surface tension, and other flow characteristics.

The code also includes algorithms that track sharp liquid interfaces through arbitrary deformations, and applies accurate normal and tangential stress boundary conditions at both solid surfaces and along the air/water interface. This was essential in accurately modelling the dynamics of the flow associated with the Smith Mountain project.

Building and validating the CFD model

Alden engineers started with as-built drawings that AEP provided and created the geometry of the model using third-party CAD software. They imported the geometry as an STL file into Flow-3D and then meshed the geometry three times: at low, medium, and high resolution. The models incorporated a total of about 13M computational cells. Flow-3D uses a time-dependent solution scheme for all problems, including steady-state simulations.

Alden initiated the simulation for a known condition and allowed it to develop through time (spin up) to the desired flow field. The grid resolution was increased at the end of the first simulation and the results of the previous solution were used as the starting point for calculations on the refined grid.

Alden’s use of multiple grids reduced the total time required to complete the computation. The model runs on a coarse grid and successively refined the grids when steady state conditions were achieved, and the engineers refined the computational grid three times to obtain the final results. To determine the footprint of the impact zone as accurately as possible, engineers created a submodel for each spillway using a higher grid resolution of about 30cm horizontally and less than 15cm vertically.

From this analysis it became apparent that, for equal flows, the water in the simulation was hitting the catch chute at nearly the same place as in the physical model. Furthermore, the general characteristics of the water were extremely similar in the physical and numerical models. In both models, the flow contracted as it left the dam and then spread out after it hit the spillway.

Predicting conditions during the PMF

Once they had validated the model, Alden’s engineers changed the inlet conditions to match the PMF determined by AEP’s other consultant. They raised the inlet flow to reach a lake level of 250.5m asl, which resulted in a flow of about 3396m3/sec. At this point, the water overtopped the dam by 1.8m and the spillway crest by 8m. Alden then compared the trajectory of the previous design flow with the trajectory at the PMF. At a section near the centre of the dam, the trajectory extended 1.5m to 3m vertically down the spillway past the impact point engineers observed at 1415m3/sec. This was still 9m vertical from where the change in catch chute slope begins, well within the area of the chute that was designed for the water impact. Engineers evaluated other sections of the dam and saw that the maximum movement in the trajectory was about 6m vertical and remained at least 6m above the bottom of the ideal landing area.

The simulation results, which closely correlated to the physical model testing performed at Alden 45 years ago, showed that even the high flows associated with a PMF would not result in water trajectories that extend past the spillway’s catch chute.

Beyond the wealth of technical information gained from the CFD study, the costs associated with performing the numerical simulations were about 20% of the projected costs associated with the design, construction and testing of an equivalent physical model. Furthermore, the numerical modelling was completed in eight weeks, which was far less time than projected for building and testing an equivalent physical model. It is also important to note that the use of computer simulations was only possible because data from the original physical model was available to validate the Flow-3D model.