The Canadian Hydropower Association (CHA) celebrates its tenth anniversary this year. Colin Clark, Chair of the CHA Board and Pierre Fortin, President of CHA, are satisfied with past industry successes but warn they cannot be complacent now. The future is bright but much work remains to be done. 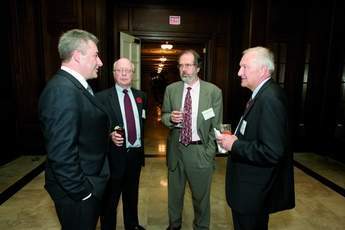 When the CHA was created in October 1998, hydro power development had been losing ground to other energy sources for years. Industry members had met several times to discuss the problem and explore ways to revitalise the business.

We identified two main obstacles to development – the growing regulatory burden, and the lack of recognition of hydro’s role as a clean and renewable source of electricity. We decided that we needed a national association to deal with these issues, and to represent hydro power in the context of climate change discussions in Canada and internationally.

We knew that it would take time before we saw results. We had to make ourselves known. Only after we had a presence could we then begin to influence public policy. Then we could work towards:

• Reducing time, uncertainty and obstacles in the regulatory approval process.

• Increasing recognition of the importance of maintaining the operational flexibility and rights of existing plants.

One of the principle advantages of a national hydro power association is that it brings all the players together around the same table. In a vast country like Canada, where energy and water developments fall under both federal and provincial jurisdictions, there are countless benefits of a common forum for sharing issues and identifying solutions. This sharing of concerns enabled us to set our key objectives and move forward from there.

For example, one of the major legislative hurdles to hydropower development in all regions of the country has been the Canadian Environmental Assessment Act (CEAA). Since its foundation, the CHA has represented the industry’s concerns to the federal government, calling for clearly defined scope, reduced approval delays, and improved harmonisation of assessment processes.

The CHA’s efforts led to a government directive to improve scoping practices, timeliness, and coordination in the administration of the process. We also contributed to the creation of a Major Projects Management Office, which will have a role in overseeing all the federal regulatory processes applicable to large projects.

We are confident that these changes will facilitate the development of new hydro power projects in Canada. In fact, we are already beginning to see a resurgence of projects in Québec, Manitoba, Ontario, Newfoundland and Labrador, and British Columbia. There is over C$50B in planned projects.

Hydro power was not always recognised as renewable. This was especially the case for hydro stations with large storage reservoirs. The association and its members have worked very hard to raise awareness of the environmental advantages of hydro power over other electricity sources. From the outset, the CHA has participated in all national discussions on climate change. We have partnered with other renewable energy industry associations to promote renewable energy development in Canada, launching in 2007 the Canadian Renewable Energy Industry Network. And on the international scene, we work with the international-hydropower-association (iha), the national-hydropower-association (nha), and the US Hydropower Council for International Development (USHCID), to create conditions more favourable to hydro power development.

Ten years ago, we had to focus on raising awareness about the environmental, social and economic role of hydro in Canada. Our constant refrain was that hydro power was the leading electricity source with 60% of supply, the clean and renewable choice, with job creation and support to regional and industrial development. Now we are shifting our focus to the future: Canada’s water resources offer a vast potential for further development – 163,000MW of technical potential. Not many countries can lay claim to so much undeveloped potential. So we can safely say that today, hydro power’s role is widely recognised. But the CHA’s work is not over. In fact, we plan on intensifying our level of activities. We need to keep up efforts to ensure that hydro continues to play a leading role in meeting electricity needs in Canada. While demand for electricity continues to grow, capital costs are also growing and the competition is fierce.

New sites are often remote and difficult to develop, costs are rising, environmental requirements are becoming more stringent, and social values are changing. For example, much of our undeveloped hydro power potential is far from load centres, and it is important to ensure that adequate transmission facilities will be available to enable development and deliver the energy where it will be needed. As another example, we must convey the facts about the very low emissions from hydro power reservoirs.

In particular, our industry is recognising the importance of establishing new relationships with Aboriginal communities.

The CHA can look back with satisfaction on its accomplishments and the successes of our industry over the last ten years; however, we cannot be complacent. Although the future is bright for the Canadian Hydropower Association and the industry, much work remains to be done. We will continue to meet the challenges, promote the many benefits of hydro power, and advocate for the responsible development of Canada’s untapped hydro resources. With its many attributes hydro power is ideally suited to supply much of Canada’s need for new renewable energy.