Vicko Letica, Vladislav Skoko and Ivana Grubljesic of IK Consulting Engineers report on the design of the first RCC dam in Iraq 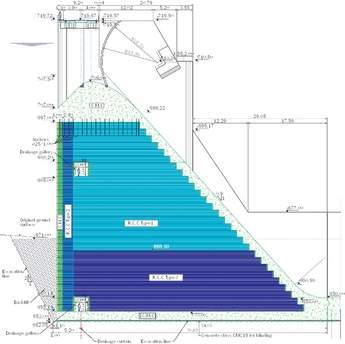 The Bassara project is located in northeastern Iraq, on the Tawooq Chai river, one of three main tributaries of the Adhaim river. The project site lies approximately 20km from Sulaimaniya and 40km upstream of Qadir Karam. Bassara Dam, which stands 67m high, and ist accompanying reservoir with a capacity of 59.7Mm3 were envisaged to provide storage and regulation of the Tawooq Chai for irrigation of Bassara Irrigation field, situated some 11km downstream of the dam. The regulation of the river and head difference created by the dam also enable generation of hydroelectricity as a secondary benefit of the project. The dam was designed between 2005 to 2008.

The Bassara region is mostly mountainous. The ridges of the hills of the area are generally flat and the slopes are steep, cut by deep gullies. A characteristic of this area is the large Tawooq Chai-Bassara gorge, which was foreseen as the Bassara dam location.

With regards to the geology of the reservoir basin, karstified limestone are observed at high levels in the layers on the right side, and heavily fractured marls and sandstones on the left side. The presence of alternating marls, sandstone and limestone has also been noted. The geological composition of the reservoir area is governed by the fold form observed in the Tawooq Chai River cut through Jabal Darbandi Bassara ridge. The upper level of Gercus formation provides the impervious barrier for possible seepage paths.

Extensive site investigations have been performed consisting of core drilling and water pressure testing. The dam site and prospective borrow area for fine grained materials have been investigated by resistivity profiling.

Ground water conditions are favorably influenced by impermeability of the rock units. Therefore groundwater may only develop during the rainy season. No permanent springs have been observed in the sandstone complex within the dam foundation area. Low bearing capacity and small resistance to erosion of the rock is a characteristic of the left river embankment at the dam site location, as confirmed by results of geological investigations.

Regarding the seismicity of the North Iraq region, there are many indications of neotectonic activities. Zones of Taurides and Zagros as part of Alpine orogenic belt are well known as potentially seismically active all as result of the contact of Euroasian and African plates.

On the basis of detailed geological site investigations a combination of roller compacted concrete (RCC) and fill dam type was proposed. The right bank dam is designed as an RCC gravity dam. This structure is founded in rock which consists of sandstones and sandy siltstone complex. The RCC dam structure consists of an overflow (spillway) and non-overflow part.

The spillway section, founded at elevation 653m, is the central part of the RCC dam. The upstream vertical face and downstream (1:0.90) outer slopes of the RCC dam are designed to provide standard safety factors. It is divided into three blocks by expansion joints. Each block has a spillway bay, 11.5m wide, 59.85m long and 53m high. The thickness of the spillway lateral walls is 2m. A bridge 11.5m long and 9.2m wide is located at the upstream part of the crest to allow construction and other traffic to pass.

The capacity of spillway will be sufficient to convey the maximum designed flood with retention in the reservoir storage available. The designed flood would result in reservoir surcharge of 1.5m above normal water level and maximum discharge over the spillway in this case will reach 2380m3/sec for a PMF flood (flood peak 2870m3/sec). Three radial gates with the clear gate opening of 11.5m are provided at the three spillway bays. Gate height is 9.3m above the spillway crest, while total gate height is approximately 10.2m. At the end of the spillway a stilling basin, 74m long, is designed for dissipation of the overflow water energy.

Dam non-overflow parts are located between the fill dam and the dam spillway section, and on the other side, between the spillway and the right river bank. They are composed of massive 15m wide blocks.

With the selected diversion scheme, a maximum discharge of 477m3/sec (in the case of 20-year return flood) will be diverted through the diversion tunnel during the construction period.

The fill dam with central concrete diaphragm is designed on the left bank. The dam crest, 9.2m wide, is at the elevation 719.5m (same as the RCC dam) thus providing the free board of 3m above the maximum reservoir level during full discharge of the flood waters over the spillway structure and free board of 1m in the emergency case when one gate is not in operation. The upstream (1:1.7) and downstream (1:1.7) outer dam slopes provide the usual safety margin against sliding under critical loading conditions (full reservoir with steady seepage for the downstream slope). The concrete diaphragm wall is designed as an impervious barrier along the fill dam axis.

Hydroelectricity will be generated as a by-product of the use of water from the Tawooq Chai river at Bassara Dam. After construction of the dam, just 1m3/sec will be used from 8m3/sec (average annual river runoff). For this purpose a hydro power plant was designed with two 2.3MW turbines.

Stability analysis for the RCC Dam

According to the geological report for the foundation joint, the applied value of the angle of friction is 47°. The cohesion contribution was not taken into account. The regional and local seismicity studies determined peak accelerations for OBE 147.13cm/sec2 and for MDE 441.45cm/sec2. Strong motion record Manjil (June 20, 1990), as an oscillatory type, and Umbria (September 3, 1997), as an induction type, were analyzed.

The first part of the dynamic stability analysis of the concrete parts of the dam structure was carried out in accordance with the Seismic Coefficient Method (Pseudo dynamic method applying the equivalent static load). For this method analysis values of peak ground acceleration for OBE and MDE are adopted for OBE (operating basis earthquake) a = 0.12g and for MDE (maximal design earthquake) a = 0.18 g.

Lateral interaction between the dam spillway and non-overflow part blocks has also been analyzed. Calculation is based on three-dimensional stability of the blocks to determine the values of interaction forces between the consecutive blocks. Based on calculations in the lateral direction it can be concluded that each block is stable for the usual load case. Lateral interaction forces occur for extreme load case. Under assumption that all blocks will oscillate within the same phase (which is almost impossible), maximal compression stress of 0.52 MPa will occur on the central block.

FEM analysis for the RCC dam

The finite element method (FEM) analysis of the RCC dam was performed for the highest spillway section and related relevant loadings. For the computational model of the dam-foundation interaction, a plane 2D model was chosen. The spillway section was approximated with 280 plane stress elements. Foundation was approximated with 1800 plane strain elements. Contact between concrete dam and foundation was simulated with nonlinear gap elements. Upstream contact between conventionally placed mass concrete (CMC) and roller compacted concrete (RCC) was simulated with frame elements.

The main objective of the analysis of temperature effects on the RCC dam structure was to determine the appropriate shape of the dam body and zoning of the different types of RCC. Temperature influences were calculated as unusual load, and various constant temperatures along sections were applied as input parameters (temperature load). For practical calculation, change of the RCC hydratation temperature was adopted as an exponential function, while change of ambient temperature was assumed as a sinusoidal function. Analysis of concrete placing for the warmest month and stipulated placing temperature of 20°C was performed.

The dynamical analyses were carried out in accordance with the time history method. The time history earthquake response analysis is based on linear-elastic analysis for all characteristics and elements except for contact between concrete and foundation where non-linear analysis was applied. It means that linear time history analysis with material nonlinearity in the gap elements was performed. Interaction between the dam and impounded water was determined using generated Westergard formulation with added masses attached to the dam.

Seismic input data in the analyses were represented by the scaled series of acceleration time histories of the recorded earthquake strong ground motion, considered as appropriate for this site.

The calculation of structure was performed by step by step method, with the adopted damping of 5-8% which corresponds to the prevailing conditions. For the numerical integration a step DT = 0.005 sec was adopted.

Taking previous analyses into consideration, one layer of CMC, 2m thick, was designed on the foundation contact level. Reinforcement within that layer will be sufficient for acceptance of superficial tension stresses and bending moments on downstream – toe part. CMC will be used for all superstructures on spillway part, for dividing walls and radial gate support, as well as for protection layer 1.5 m thick along spillway surface. First horizontal RCC layer, 3m thick, with better characteristics, was designed right above the CMC layer. Beside longitudinal forces, the first horizontal RCC layer of the highest blocks, 3m thick, shall accept lateral forces as well. Thus, this layer shall be composed of RCC Type 3, with better characteristics and compressive strength of 16 MPa. On the upstream dam face one zone of RCC Type 2, with better characteristics and compressive strength of 14 MPa, shall be placed. It is located between the CMC zone and the upstream face of the drainage galleries. All other concrete zones, except spillway superstructures, will be of primal RCC Type 1 with compressive strength of 10 MPa.

The upstream dam face will be covered with precast elements 0.12m thick and 1.5m high, which will be protected from water leaking and used as a formwork during RCC placing. Expansion joints will be provided with two waterstop layers. Between these layers, vertical drainage pipes will be placed. Drainage pipes will collect eventual leakage water and drain it through the drainage galleries to the stilling basin. This 1m wide zone, in which waterstops and drainage pipe will be placed, shall be made of CMC.