T&D: 250 miles by sea – the most direct route from Scotland to England

For the UK, tackling climate change targets by increasing renewables generation presents a new problem – much of it is in Scotland, well away from the major load centres in England. The unusual way described here of linking the grids of two contiguous countries will go a long way towards solving that problem. 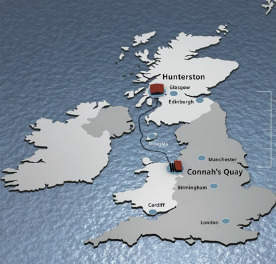 The UK faces a major challenge in meeting projected energy needs over the next few decades, while at the same time tackling climate change. To meet this challenge the UK is increasing the amount of energy generated by renewable sources such as wind and marine sources, and a high proportion of this is in Scotland, where the amount of renewable energy generated is rising rapidly.
However the Scottish electricity transmission system links to England and Wales are already running at full capacity. An additional link with Scotland is needed to enable the new sources to connect into the electricity network, in particular to transfer significant amounts of renewably-generated electricity from central and northern Scotland to the centres of consumption in the English midlands.

After a comprehensive study of necessary UK grid reinforcement measures by the Electricity Networks Strategy Group, which paid special attention to the influence on the grid of large amounts of renewables genertion coming on stream in the coming years, it was concluded that under all the generation scenarios considered, the power transfers from Scotland to England would have to increase significantly.

System reinforcements costing £4.7 bn in total was considered necessary, with the resulting network being able to accommodate a further 45 GW of generation, of which 34 GW could be a combination of onshore and offshore wind generation. The opportunity was taken to optimise the integration of onshore and offshore developments. This would facilitate a significant saving, estimated to exceed £850M, in developing offshore networks, which could be achieved by timely investment in the onshore network.

But reinforcements needed to relieve the boundary restrictions across the England-Scotland circuits resulted in power transfers on the Upper North network of the England and Wales transmission system that would exceed the network’s capability.

As part of the greater scheme it was decided that the best way to provide the necessary reinforcement to these routes would be to construct a new high voltage direct current connection and to take it not by land but by a sea route direct to a coastal port of the west midlands region. The AC overhead line alternative was rejected primarily because of the difficulty expected in gaining planning permission.

The resulting interconnector is to be known as the Western HVDC Link. It will cost €1.1 billion, be 250 miles long, 385 km, with a capacity of 2.2 GW, and is expected to be operational in 2016. At ±600 kV it will be the highest DC voltage rated such subsea interconnector, the highest to date being 500 kV, and the second longest in the world. The longest, at 580 km, is the 700 MW Norway-Netherlands HVDC link, NorNed, which started carrying power in 2008.

Full turnkey construction (design, manufacture, installation, testing and commissioning) will be carried out by a consortium of Siemens and Prysmian. The project consists of five sections:

The interconnector is expected to function primarily in a north to south direction but it will be bi-directional, in order to improve the balancing capabilities of a grid with large amounts of intermittent renewables connected to it. This is manageable at present but the renewables component is expected to increase significantly to meet political targets maturing in 2020 and 2030.

The consortium is responsible for turnkey supply of the link. This includes co-ordination and logistics efforts for all cable installation along the 420 km long route as well as the converter stations at Hunterston and the Wirral area. Siemens’ Energy Sector will deliver the HVDC converter stations, and Prysmian will deliver provide and install the undersea and land cables including responsibility for the Wirral (the line’s southern end) and cable installation work, including all preparations and reinstatement. The project’s total value amounts to a little over €1.1 billion, with Siemens’ portion being €350 million.

National Grid decided that a subsea marine HVDC cable was the best choice because in this long-distance case it provided the most efficient and economic solution using fewer cables (although in some long distance cases the use of HVDC technology is relatively expensive and not efficient), and the use of DC transmission makes long-distance subsea cable technically possible. The case improves where subsea cables can be installed relatively quickly, with minimal disruption to local communities.

But a number of options were considered, including overhead lines and underground cables across mainland Britain. Taking into account the overall costs, potential impacts on local communities and potential environmental effects, a subsea cable was considered the most cost-effective and appropriate solution.

Prysmian Group’s contract, worth almost €800 million, is the highest value ever awarded in the cable business, The cabling will consist of bi-pole cables using PPL (paper polypropylene laminate) insulation, a technology that Prysmian favours for its enhanced electrical and thermal performance. Prysmian has been in the forefront of bringing mass impregnated PPL cables, a material technology that it says allows the attainment of a higher voltage class of line, reduced cables dimensions for equivalent transmission capacity and optimised power losses.

Installation of the submarine section in the Irish Sea is committed to Prysmian’s own cable ship Giulio Verne.

At the northern end approximately 4km of underground DC cable is needed from the new converter station running south to a landfall at Ardneil Bay, where the underground land cable connects to the marine cable.

"At the southern end work on the Wirral cable installation started in the spring of 2013."

At the southern end work on the Wirral cable installation started in the spring of 2013. Initially there was a proposal to route the cable through the Dee river estuary as it is the most direct route, but this was not feasible. The movement of the sand on the bed of the river and the use of the estuary by shipping increased the possibility that the cable would not work properly or would be damaged. Also, the estuary is classed as an area of high environmental importance.

One slightly unusual aspect, because of the region’s wartime history, has been the conducting of a survey for unexploded ordnance along the cable route in the Beaufort Dyke and Liverpool Bay areas This took place in the summer and autumn of 2013 using a remotely operated vehicle. Shortly afterwards trialling of the main sea cable burial system took place out in the Irish Sea.

The northern end Flintshire Bridge converter station is to be built at Deeside Industrial Park. Work by Siemens began in June 2013. It is also necessary to install AC underground cables from the converter station under the River Dee to connect to Deeside substation, as this is the strongest point on the transmission system in North Wales and North West England.