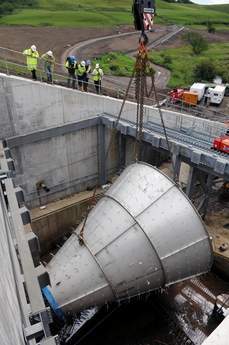 White Cart Water is a normally placid, fast-flowing river that travels peacefully through the Scottish uplands to the south of Glasgow before following a 10km journey north-west, first through agricultural land before reaching the city’s urban South Side and passing through Cathcart, Pollok Country Park and Paisley before joining the River Clyde at Renfrew.

However, the river has cast a turbulent shadow over the South Side of the city for more than a century. Prolonged and intense periods of rain signal trouble for residents and businesses along its urban banks and they are used to waiting and watching anxiously when water levels rise.

Normally a shallow river, White Cart Water is prone to flash flooding. As little as twelve hours of rain can cause water levels to rise by six metres with the potential to turn the river into a raging torrent as it gathers momentum downstream towards the vulnerable suburbs of the city.

Since 1908 there have been more than 20 significant floods caused by relatively minor storms. One of the most memorable was at Hogmanay 1984 when 500 homes in Battlefield and Langside were inundated and millions of pounds of damage caused. Only 12 days later floods inflicted further misery in the same area. In 1990 residents in the area were struck again. In 1994, the river burst its banks once more in various places including Paisley, and in 1999 families living in Cathcart and Langside suffered thousands of pounds of damage when the water reached waist height in their homes.

The silent threat of White Cart was something that Glasgow City Council’s Iain Macnab remembers well: “As a small boy living in the area I often saw the river flooding. I thought to myself – ‘I would like to sort that river out’ and it looks like by the time I retire it will be sorted.”

Macnab is now Head of Project Management and Design at Glasgow City Council and leading a £53M Flood Alleviation Project which will provide protection for 1750 homes and 40 businesses from the risk of flooding.

Public awareness of ‘80s and ‘90s floods, coupled with increasing awareness that meteorologists predict more intense periods of rainfall in future as a result of Climate Change, made finding the solution for a scheme a major priority for the city council.

In addition, the insurance industry began to threaten higher premiums or even to refuse flood insurance for high-risk areas. The prospect that residents might not be able to sell properties or that businesses may be unsustainable was a portent of neglect for an area which was desperately in need of regeneration.

Taming the White Cart Water and its tributaries would not be straightforward task. Initial studies soon revealed that the height and force of the floods meant that to engineer a conventional flood protection solution using flood defences along the river’s urban banks would require flood walls over two metres high.

“The extent of construction along the river would have been enormous. It was environmentally unacceptable. We would essentially have had to close the natural river system down in some places, leading to a real loss of amenity for residents, as well as important natural habitats,” says Macnab. “We had to think outside of the box to find a sustainable solution and so we came to consider an attenuation project which held back water upstream during a storm, making the best use of the natural environment.”

In 2002 Consulting Engineers Halcrow were appointed to design a flood alleviation scheme based on an holistic catchment management principle . Main contractor Carillion was appointed by the City Council in February 2008 to construct the three flood storage areas which are integral to the scheme,

Building flood storage areas upstream to hold back the water during storm events would enable flood walls and defences along the river downstream in the city to be reduced to an average height of about one metre.

Halcrow began by looking at potential sites for flood storage areas in the uplands. In all, 33 sites were considered for size, topography and geotechnical ability to take a dam. Halcrow established that to constrain the flow would require attenuation basins on the White Cart Water and its two major tributaries Earn Water and Kittoch Water.

“There were various considerations to the selection of the final three storage areas and dam design, including the engineering requirements, environmental considerations, the social impact of the scheme and costs. Two of the three dams were constructed using locally-sourced materials avoiding the need to import material and reducing the number of vehicle journeys,” explains Halcrow’s Alan McGowan, Project Manager for White Cart Water Flood Prevention Scheme.

The completed scheme will protect against the peak flow associated with a 1 in 200 year flood event, or 0.5% annual exceedance probability and peak flows will be reduced by up to 45%.

Carillion has constructed three flood storage areas and associated dams. Blackhouse (Earn Water) is located in East Renfrewshire and Kirkland Bridge (White Cart Water) and Kittoch Bridge (Kittoch Water) straddle East Renfrewshire and South Lanarkshire. Together they have the capability to hold back more than 571 million gallons of flood water. They will provide 90,000m2 of rich and diverse wetland habitats. As part of the scheme design, plans were made to enhance biodiversity and wildlife habitat of the area with the creation of woodland, scrub, and species-rich wet grasslands, shallow scrapes and ponds and other artificial habitats.

Whilst the flood storage areas are being completed upstream, a second part of the scheme involves the construction of flood defences along the river bank in the City. The project involves the construction of further flood defences in selected parts of the river corridor downstream, including 4.5km of urban flood walls, pumping stations and the raising of two footbridges.

Central to the entire scheme was the installation of giant cone-shaped Hydro-Brake Flow Control devices into the three dams. Since Hydro International invented and developed the Hydro-Brake Flow Control’s unique vortex technology 30 years ago, it has become an industry-standard method of flow attenuation. Most frequently used in much smaller dimensions as part of urban surface water drainage designs, the Hydro-Brake Flow Control’s internal geometry is designed to enable water to flow unrestricted through it for as long as possible. A self-activating vortex is created when the water upstream reaches a pre-determined height, for example in a flood situation, throttling back the water, and releasing it at a measured, controlled rate.

“Using Hydro-Brake Flow Controls enabled the storage capacity within the attenuation area to be used most effectively, because flows can pass unheeded through them for longer than other flow control devices. Alternatives such as orifice plates, weirs or gates would start to hold back the water at a much earlier stage,” says Alan McGowan.

“The Hydro-Brake Flow Controls will reduce frequency and duration of flooding of the storage area, which is important given that most of the land upstream will return to agricultural use.

“Hydro-Brake Flow Controls offer an efficient fail-safe, passive method of flow control. They do not need power to operate, and once installed, they can be left alone to do their job with minimal maintenance for the foreseeable future.”

Alex Stephenson, Director, Stormwater Division, Hydro International explains: “In order to cope with the flow rates and velocities of the water in a peak storm event, we needed to design Hydro-Brake Flow Controls of a size never before attempted.

“The size of the two biggest Hydro-Brake Flow Controls meant that our designers were challenged to pioneer ground-breaking methods of manufacture and to work closely with Carillion in planning and executing their successful installation.

“The Hydro team therefore developed a new method, based on constructing a thinner stainless steel shell former. In each case, the Hydro-Brake Flow Control former was brought to site and fixed into the dam, reinforced by temporary internal struts. 100m3 of concrete was then poured in to create a 600mm thick outer casing. The resulting structure is able to resist the huge forces of the flood water, whilst retaining the unique vortex-control geometry internally.”

Mark Johnston, Carillion’s Project Manager for the scheme adds: “Hydro and Carillion worked closely together to pioneer installation methods for the new Hydro-Brake Flow Control design. Constructing a dam with a device of this size and type has never been attempted before and a close working relationship between the manufacturer and ourselves was essential to the successful outcome.”

Reducing the risk of flooding

The two phases of the White Cart Flood Prevention Scheme that are under construction will provide much welcome relief to an area of the city which has suffered with flooding for over a century, reducing the risk of flooding to over 95% of properties in the area.

The City Council is proud of an innovative scheme that will bring optimism and rebirth to an area of Glasgow, much in need of redevelopment and regeneration. East Renfrewshire and South Lanarkshire councils have also provided a large amount of support and cooperation to the scheme.

“The scheme has removed the threat that properties and businesses will be uninsurable and therefore we are hopeful it will provide a spur to regeneration and development in this area Glasgow,” says Iain Macnab.

More than this, he says, the council has benefited from the skills and experience gathered through the attenuation scheme in controlling surface water flows in a sustainable way that complements the best of what nature has to offer.

He continues: “The scheme has developed our thinking in terms of other smaller surface water schemes for the city, in particular the way we approach sustainable urban drainage. Through the Metropolitan Glasgow Strategic Drainage Planning Partnership, we are now focusing more on how we can control runoff at source, rather than leaving it to drain into rivers and watercourses where it could cause potential flooding risks.”