Fifteen Linden Comansa tower cranes are being utilised on the construction site of the Baixo Sabor hydroelectric plant in Portugal. Official dealer IBERGRU has been instrumental in ensuring that site managers choose appropriate equipment for the construction of this 170MW project. 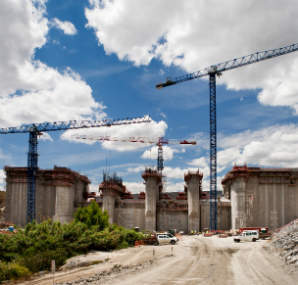 Since 2008, Energias de Portugal (EDP), the largest electric utility company in the country, has been building the Baixo Sabor hydroelectric plant in the municipality of Torre de Moncorvo. Registered within the National Plan of High Potential Hydroelectric dams, this facility will enter into service in August 2014, with an installed capacity of 170 MW and generating up to 444 GWh per year. Comprised by two dams, the main one is located upstream of the Sabor River and set 9.km apart from the downstream one, that will flood an area over 50km, thus creating the third largest lake in Portugal.

The temporary consortium Baixo Sabor ACE, formed by Odebrecht / Bento Pedroso Construções and Lena Construções is the company responsible for the construction of the dams, with a budget of over 480 million euros (around US$643M). The jobsite will employ up to 1675 people, with an excavation volume of around 3Mm3, where a volume of 1.1Mm3 concrete shall be used.

The magnitude of the project also requires a large amount of machinery. Therefore, Linden Comansa’s official distributor in Portugal, Ibergru, has supplied to the jobsite 15 flat-top tower cranes from the Spanish manufacturer, with maximum load in a range between 5 and 48 tons.

The main plant, located upstream, is a double-curvature dam and will have a height of 123m and a width of 505m. Four tower cranes are being employed in its construction, all Linden Comansa models 10LC140, with a maximum load capacity of 8 tons.

The assembling of two of these 10LC140 cranes was a challenge due to the difficult accessibility. However, Ibergru found a solution that facilitated efficient use of available resources on site, saving other costs. The Blondin system was used to pour large amounts of concrete for the dam. Ibergru proposed to the site managers the utilisation of these blondins in the assembling of the two 10LC140 cranes, a very unusual solution that was not only successful but also cost-effective.

Next to the upstream station, a LC5211 5ton tower crane is constructing a building that will be part of the administrative facilities of the dam. Two 5LC5010 models, with a maximum load of 5 ton, are working as service cranes in the yards that serve as warehouse and workshop for the jobsite materials.

The secondary dam, a gravity type, is located downstream closer to the river’s mouth, and will be 45m high and 315m wide. The five largest tower cranes working in this project include: two 21LC750, with up to 48 tons capacity, and three 21LC550 with a maximum load capacity of 18 tons. Another 5LC5010 with maximum load of 5 tons is working as service crane, helping to manage the machinery and materials required on the site.

In addition, two 18-ton capacity Linden Comansa 21LC290 cranes are working in the construction of a new bridge. Located near the downstream plant, this 268m long and 40m high bridge will allow the EN102 road to cross the river, since the current Portela Bridge will be submerged by the waters.

Ibergru has been Linden Comansa’s official distributor in Portugal since 2002. It is not only supplying the rental cranes, but also contributing with its experience of large scale projects and advising the jobsite management on choosing the right equipment for each task. Ibergru has planned, coordinated, and executed all logistics entailed by the erection of the cranes, in conditions of difficult accessibility given the complex topography of the jobsite.