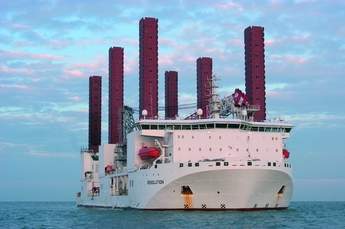 The Kentish Flats wind farm (pictured above), located on the southern side of the outer Thames Estuary, was constructed in the summer of 2005 and comprises 30 turbines each with a rated capacity of 3 MW – the largest offshore machines so far in UK waters (although not as large as the seven 3.6 MWe GE machines commissioned last year at Arklow Bank off the coast of Ireland).

The site of Kentish Flats is a large, flat and shallow plateau just outside the main Thames shipping lanes. The wind farm is in a water depth of 6-8 m, about 8.8 km from Herne Bay.

It is the third wind farm to enter service of the 13 projects launched under the UK’s “Round 1” call-for-bids to develop pilot offshore wind facilities relatively near to land and in relatively shallow waters.

Following acceptance testing of the individual turbines and of the entire wind farm the take-over certificate for Kentish Flats was signed on 8 December 2005, marking its entry into commercial operation.

The project, which was executed on a turnkey basis by Vestas, was fully consented in March 2003. M T Hojgaard was foundation subcontractor. AEI was cable supplier while Global Marine was responsible for offshore cable laying.

Rambøll was chosen by M T Hojgaard to do detailed design of the turbine foundation structures. The foundations are of the monopile type, with a grouted transition piece, as installed by M T Hojgaard at Horns Rev. The project effectively involved 30 different foundation designs, depending on site conditions at each location. A number of innovations were incorporated in the foundations to reduce weight.

The subcontract for the load out, transport and installation of the 30 monopiles and transition pieces was awarded by M T Hojgaard in May 2004 to MPI, which has a purpose built vessel Resolution. Construction work on the site started in the summer of 2004.

Monopile weights were in the range of 150 to 185 tonnes and lengths 33 to 41 metres. Transitions weighed 70 tonnes and were completely fitted out with all platforms, J-tubes, boat landings and cathodic protection. The transitions were stowed vertically on Resolution’s deck, which minimised damage to the finished paint system.

Resolution provided a complete turnkey service for foundation collection, transport, and installation, with on board accommodation provided for the 30 plus construction team members and client representatives working around the clock. No other support vessels were necessary, other than small work boats for local deliveries and personnel transfers at the Kentish Flats site. The foundation installation took 58 days including an allowance of 9 days for weather down time.

Operational and environmental conditions were extremely onerous throughout the installation period. Detailed planning was essential to maintain smooth, continuous and efficient installation operations. Leg penetrations were typically 7 to 8 m but on occasions 10 to 11 m. Low water at most monopile locations was nominally 4 m and Resolution’s draft fully loaded is also nominally 4 m. So to maintain the programme, the cycle of jack-down at one location, moving and jacking-up at the next location had to be achieved within one high water tide. On average, a foundation was installed every 2 days, including all load out and weather downtime.

The wind farm is connected to the grid via three buried cables from to the onshore substation. The 33 kV PEX cable consists of copper conductors as well as a number of fibre optics for communication and control purposes.

In the development of the V90 wind turbine Vestas says it has made a particular effort to take on board the needs of customers, in particular the need to produce energy at the lowest possible cost per unit, which in turn is driven by capital costs, repair & maintenance costs and insurance (a particularly important consideration in the case of offshore projects).

Transport and erection costs are inextricably linked to weight, and weight reduction is a key feature of the 3 MWe V90, which boasts a top head mass of only 108 t (nacelle = 68 t, rotor, including blades = 40t). The forces acting on the machine foundation are absorbed by an optimised structure that obviates the need for a conventional main shaft. The blade hub is instead fitted directly to the gearbox, which thus becomes a part of the machine foundation. Elimination of the main shaft is a main contributor to the reduced weight.

Another important contributor to the increased power-to-weight ratio is the optimised blade design, with use of carbon fibre in spars, where it can replace glass fibre in a cost efficient way. Carbon fibres are (in comparison to glass fibres) 3 times as stiff and only 2/3 of the weight. The 45 m blade of the V90 is lighter than previous 39 m blades.

The use of carbon fibres opens completely new possibilities regarding slenderness and thickness of the blade. Thus the blade can be optimised to reduce loads. Lower operational and extreme loads translate directly into materials savings on nacelle, tower and foundation. The profile has also been optimised for increased energy capture and to reduce sensitivity to deposits of water, salt and dirt on the blades.

In recognition that lightning strikes are one of the main causes of insurance concern, the lightning protection has been improved significantly, with an increase in the number of lightning receptors along the blade.

In addition to the usual sensors, the integrity of the turbine is enhanced through additional sensors for smoke, air density, and icing.

Weight reduction has also been a main driver in design of the tower, facilitating easier transport and installation and thus resulting in cost reductions.

Fastening the tower’s interior components (such as ladders, platform and light fixtures) to the tower wall without welding makes it possible to improve the fatigue resistance of the shells in the tower.

By avoiding welding, it was also possible to use a stronger type of steel than before, making the tower lighter. The new V90-3.0 MW tower uses S 355. An 80 m tower in this material weighs only about 160 t (compared with 200 t for an equivalent tower in the previous material). The Kentish Flats towers are shorter and weigh even less.

Since the tower now weighs less thanks to the stronger steel, it is also less costly to handle, transport and erect.

Another significant improvement is that the V90 requires less servicing than previous turbines, with component layout in the tower and nacelle making service and maintenance easier.

The gearbox design has been verified by a number of external third parties and a series of in-depth tests have been carried out. For example, a lifetime test of the gears has been performed at the Vestas in-house development laboratory, where tests continue in an effort to find weak spots as early as possible. At the same time, tests have been performed to measure the effects of heat and cold, humidity, salinity etc on components to ensure that the new turbine will perform well and reliably under a range of climatic conditions, including offshore.

With Horns Rev experience still fresh in the memory, a good deal of effort has also been expended on marinisation, which includes: offshore class corrosion protection to ISO 12944-2; fully enclosed nacelle; control of internal temperature to avoid condensation; insensitivity of blade profile to water/salt deposits; redundancy of key sensors; ice detection on blades; extensive remote monitoring and control; and remote operation of switchgear.

There will be intense interest in the early operating experience with Kentish Flats and the other offshore V90 machines due to enter service shortly (eg, a further 30 in the UK, at Barrow, and 36 at Egmond aan Zee, the Netherlands’ first offshore wind project). It is important to confirm that the challenge of achieving reliability in offshore conditions is being met.