An impressive safety record at the Cotter dam construction site in Australia has been achieved through innovative construction techniques and safer design processes, coupled with in-depth training and reporting procedures. 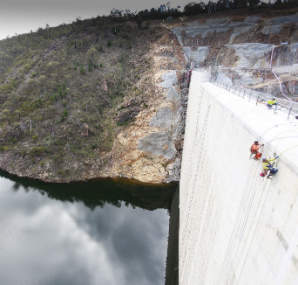 ?Following nearly a decade of severe drought the Australian Capital Territory (ACT) Government gave the go ahead for the construction of the enlarged Cotter dam in 2007. The completion of this project will help to relieve the burden of harsh water restrictions on the Canberra community for future generations.

The dam has been constructed through the Bulk Water Alliance which is comprised of ACTEW Water, John Holland, Abigroup and GHD. It will be operated by ACTEW Water.

At 80m high, Cotter dam is Canberra’s newest reservoir and will be the tallest roller compacted concrete (RCC) dam in Australia. With a capacity of 78 GL, it will add an extra 35% to total water storage for Canberra and the surrounding region.

Construction commenced in November 2009 and is due for completion by August 2013. Importantly, the diversion pipe out of the dam was closed on 25 February this year, meaning the structure is already storing water for the future.

The peak construction period ran over a nine month period during the placement of RCC where a construction workforce of 320 workers was employed on the dam. Of these, 210 workers were employed on a 24-hour, seven days a week shift arrangement for the placement of the concrete, with the remaining 110 workers building other structures and support infrastructure. The workforce was supported by 70 engineering, supervisory and functional support staff.

By March 2013, the total recordable injury frequency rate was 11.99 in 2,420,00hrs worked. Key factors that impacted workers’ health were heat and cold. However, no hypothermia was reported even though workers were required to work in freezing and wet conditions at times. These conditions also made it difficult for workers undertaking manual cleaning of the abutments and using high impact and vibration hand tools. Implementation of a strategy to rotate tasks and provide anti-vibration tools and equipment resulted in only one injury associated with repetitive strain being recorded.

The high elevation of the site meant workers had 480 stairs to climb from the top to the bottom of the dam. In order to pre-empt any issues associated with fatigue from the climb, a walk up/walk down policy was implemented, with workers able to be driven either up or down to the site so they only had to walk one way. This also mitigated the slip hazard associated with climbing the stairs in icy conditions.

To ensure continued staff engagement in the work, the overall strategy for ensuring relief from the physical demands of the project was early, active intervention and support. This allowed workers that were experiencing any discomfort to access help and be rotated to less demanding tasks during their recovery. With over 3009 people inducted, this strategy was important in worker retention and ensuring continued productivity on the dam. This strategy has resulted in only 21 cases out of 224 reported cases requiring extended treatment or delayed return to normal duties.

Given many medical facilities are not available at all times, it was critically important that workers had the support and confidence to report any minor discomfort or injuries and have them treated during standard business hours. The development of a culture of open dialogue and reporting of all incidents/near misses enabled the Bulk Water Alliance Safety Team to limit injury in this environment of intense physical work and exposure to the elements. This culture of support undoubtedly contributed to the low number of injuries serious enough to warrant lost work time.

High priority
Training of all staff and workers was a high priority on-site, with each worker being assessed on arrival to determine any skills gaps and arrangements were made for training to be undertaken so that the workers could undertake all tasks safely.

To March 2013 the project had delivered over 3500 days of competency training for workers and staff in:

In addition all staff were trained in Certificate IV – Construct Safety Leadership and Task Risk Assessment. Selected staff have also attended training in incident investigation, crane operations and various other training courses related to construction. All workers and staff were required to complete drug and alcohol awareness, fatigue management and bullying and harassment training.

To ensure the successful construction of the dam and to prevent any unwanted delay, it was essential that incident reporting on the project was maintained during the 24/7 operations. In consideration of this challenge, a number of strategies were established to make sure that the management team was aware of all incidents.

Firstly, all workers were encourage to immediately report any incident, regardless of seriousness, a condition that was explained in the project induction and reinforced daily at pre-start briefings. Secondly, a closed call reporting system was implemented to allow workers to formally or anonymously report events that they considered incidents waiting to happen or near miss events. This system alone increased incoming incident reports by 50%. In addition to this, where an incident was reported, depending on the event, risk based investigations were conducted to determine root cause so that systemic issues associated with processes could be corrected and processes implemented to prevent reoccurrence

Because of unique and unforeseeable situations that arose during the course of the complex construction project, the reliance on open dialogue between the management team and the workforce was of critical importance in addressing construction issues. Consultative risk management practices were implemented to allow issues to be discussed during planning and execution of the works. Through this process, engineers, supervisors and workers were all encouraged to challenge the proposed process methods to identify opportunities for improvement.

The consultative nature of the process planning also led to innovation. An example of one such innovation developed by workers is a modified concrete kibble that is used for placing structural concrete on the sloping face of the dam. While usually operated manually, the kibble at the Cotter dam site is operated remotely from a safe position using electric/hydraulic systems which eliminated the risk associated with discharging a kibble on a difficult slope that exposed workers to serious fall risk.

Other innovations that were developed as part of the process were purpose designed formwork for various components of the dam, where methods were trialled prior to agreement of the final methods to be used on the dam. Another example was the changed processes for delivery of product associated with the placement of RCC that removed/reduced the reliance on the tower cranes which were sometimes unsafe to use due to environmental constraints such as high winds.

Public safety
Public safety has been of paramount importance to the construction team. In order to ensure this Cotter Avenue and Cotter Campground were closed until spring last year, ensuring recreational users were not exposed to hazards posed by heavy vehicle movements and high levels of noise. Realising that the community would still desire access to the Cotter area for recreation, ACTEW Water refurbished a recreational space just downstream at Casuarina Sands. This action ensured the public were safe at all times but also had access to a recreational space on the river to enjoy.

Hazard modelling also helped to inform the best way to ensure public safety, for example through the rock blasting procedures on the dam abutments and the quarry. In this case the construction team used a computerised model to simulate blasts and develop temporary exclusion zones for the public on local roads including Cotter Road and Brindabella Road, and the Cotter Discovery Trail.

The shared roads policy is another example of how ACTEW Water and the construction team have balanced the needs of construction to ensure public safety. The policy clearly outlines how the team will ensure members of the public are kept safe on the roads by installing signage, keeping the community updated on construction, including any impacts on the local roads; and through ongoing consultation with key users, such as cycling and horse riding groups. In addition the safety team has developed close working relationships with Territory and Municipal Services and ACT Policing to ensure information exchange and enforcement of road rules in the area leads to the best possible outcomes for road safety in the area.

The safety team also run regular tool box talks with staff to ensure they are aware of other users such as horse riders, cyclists and passenger buses, and run additional awareness sessions during high use periods, such as school holidays, to ensure adherence to the policy.

Extending obligations
The Bulk Water Alliance developed a series of 19 workplace safety standards over the duration of the project which set the minimum requirements for working on the project. These standards were situational and risk based and were applied to address obligations under worker health and safety laws. While these standards encompassed all mandatory requirements, there were other practices implemented that extended beyond meeting legal obligations, such as the mock emergency drills run on site.

These drills were delivered through engaging the emergency services in the ACT in running three emergency drills involving emergency services staff, such as paramedics, as well as the workforce. They were used to test the capabilities of the Bulk Water Alliance crew and also the ability of the emergency services to respond to an on-site emergency. This partnership has resulted in a strong, mutually beneficial relationship where ACT emergency services regularly contact the safety team for updates and bring their staff to the construction site to provide them with an opportunity to plan for emergency responses in difficult situations.

Safety improvements
Improvement in safety processes will always be an ongoing process in projects as complex as Cotter dam. There were significant safety improvement made during each phase of this project and there will continue to be improvement strategies implemented until project completion.

One key challenge on the Cotter dam included understanding cultural differences in work method and practices, and ensuring adequate communications. While the Cotter dam site employed many local people, a significant component of the workforce was staff from overseas, in particular Ireland. Practices ensuring uniformity and widespread understanding of various work processes in a culturally diverse workforce will continue to be a challenge on construction sites.

Safety on the dam also improved through the development of the Cotter Cup Program. The Cotter Cup is a league style competition with different work groups taking on their own team names and earning points that could be used to win gift vouchers through assessments by senior managers. This competition went beyond traditional inspections where workers are simply asked to correct any identified risks, and was based on an interview process that challenged workers to understand why certain safety procedures, such as task risk assessments were instituted. This grass roots programme engaged the teams in managing risk; enabling peer review of the methods adopted across all crews and assisting in evolving processes in a way that ensured there was both ownership and consistency in all work methods.

Significantly, safety improvements made were not generally process based but about the culture and behaviour of the people working on the project. These cultural shifts towards an increased emphasis on safety have enabled continual improvement in safety at all levels.