Taking on the challenges 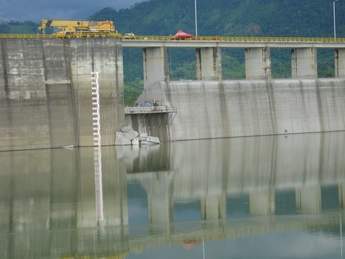 As public and political concerns about the environment grow, the construction of new dams is facing increasing difficulties. A good alternative that has little environmental impact is to increase the storage capacity of an existing dam without raising the maximum water level.

A successful example of this solution is the recent augmentation of the Urra Dam in the Columbian state of Cordoba. The project – to raise the full supply level of the dam – required the removal of a 5.2m high section of the existing concrete spillway and structural modifications to the remaining crest to accommodate Fusegates.

Urra 1 is an 85MW hydro power scheme located on the River Sinu in Cordoba, Colombia and is owned and operated by Empressa URRA ESP SA. It compromises a 73m high rockfill embankment impounding 1.740Mm3 of water and a 182m long free overflow spillway. This is spanned over its entire length by a bridge with piers at 14m intervals.

It was decided to raise the reservoir by 2m in order to increase storage capacity and improve flood mitigation. The project was subject to the prior approval of the Colombian authorities through a comprehensive environmental impact study, which concluded that the reservoir raising had negligible impacts on the area surrounding the reservoir.

After an evaluation of a number of technical options, Empressa Urra ESP SA decided to meet the project requirements by installing 22 double hydroplus Fusegates on 11 of the 13 bays of the spillway. The remaining two spillway bays were to be fitted with flap gates – each 5.5m high and 12m wide.

The 11 bays required some structural modification in order to be equipped with Fusegates and a search was conducted to find a company with the skills to lower the overspill crest by 5.3m without causing any structural damage to the remaining concrete. There was particular concern that the bridge piers might be damaged during the concrete removal process.

DecoTEC Pty Ltd, an Australian based structural modification company, was chosen from the shortlist of contractors due to their experience in dam modification and references provided in respect to DecoTEC’s ongoing work modifying the Hinze water supply dam on the Gold Coast, Australia.

Prior to bidding for the project, DecoTEC’s Managing Director and Technical Director, Allan Moss, went to Colombia to ensure that there was a sufficient level of security for the company’s personnel. While these security concerns proved to be unfounded, the logistical difficulties in working in a remote area of Colombia proved to be a real issue.

“The bigger challenges were logistical, due to the extreme isolation of the dam, the language barrier and the custom clearance arrangements for importing plant and equipment to Colombia,” said Moss. “Mostly these challenges were overcome by over estimating the consumables required to complete the job, and by bringing at least one back up machine for each of the operations.

“This required significant co-operation between DecoTEC’s Australian and New Zealand-based technicians, the Columbian employees and the Urra Dam’s project manager.”

• Traditional breaking using either hydraulic or pneumatic equipment. This methodology was quickly rejected because of the risk of micro-cracking to the remaining structure, the proximity of the bridge piers to the excavated edge of the concrete, noise and environmental impacts.

• Cutting the outline with wire saws and then using a hydraulic breaker to remove the concrete. There were, however, still micro-cracking issues using this methodology. In addition, it required the building of platforms for the excavator to work from until such time as there was a sufficient base on the structure itself. The concrete rubble would also have to be contained.

• Hydro-demolition. This methodology was given serious consideration but rejected primarily on economic and environmental grounds – principally the need to control large amount of contaminated water from the hydro-demolition operations.

• Cutting and bursting into large blocks. This was the method ultimately chosen. It involved cutting the outline of the excavation using wire saws, and then cutting and bursting the concrete into pieces that could be craned from the spillway and deposited into the upstream side of the crest.

“We were able to show the dam’s owners that this was also the most time-efficient and cost-effective method, as well as meeting their environmental goals,” added Moss.

Empressa Urra also had stringent Environmental and Health & Safety requirements. DecoTEC initially thought that its approach to meeting these standards would make its quote uncompetitive. Scoping of the project, however, revealed that Urra’s and DecoTEC’s standards were at a similar level and this proved to be one of the key elements in DecoTEC being awarded the project.

On a tight schedule

Having been appointed, DecoTEC had just four weeks to organize the necessary equipment and ship it to Colombia, organize its Australian and New Zealand crew with the correct work visas and inoculations and then transport them to the remote site.

At the same time, contracts for the design and building of the working platforms and access ways had to be let and the work started without delay. Colombian law required DecoTEC to employ three locals for every foreign worker. It awarded the contract to Prospera ILB EU, a local company who were able to complete the work within the extremely tight time frames.

Once onsite, DecoTEC’s plan was to wire saw an outline, wire saw an additional horizontal line at about the half way point, 2.9m above the bottom cut, and then wire saw one internal cut so that the first block could be removed easily to create space for the remaining blocks to be burst into.

In any wire sawing operation, the critical part is accurately drilling the wire holes. The holes were drilled from the upstream side with the two outside holes being crucial in that they had to be accurate both in the horizontal and vertical planes. The plan called for the bottom surface of the cut to be on a slope of 2% upstream/downstream as well as perpendicular to the axis of the dam, which was significantly different to the face of the concrete at that point.

“The cross-section of the dam wall was 12m deep and the design called for a fall in the cut profile of 2%, so accurately drilling the hole for the wire was vital,” said Moss.

Once drilling began, however, it quickly became apparent that there was significantly more reinforcing steel within the concrete than indicated by the drawings. DecoTEC decided to wire saw the upstream/downstream sections rather than burst them.

The drilling and wire sawing were originally planned to take 53 days. With the addition, however, of a further 240m2 of wire sawing, the drilling/wire sawing actually took 58 days.

DecoTEC decided the transverse sections could still be burst, but this required the hiring of a burster with twice the power than the one they had originally specified. The burster was one machine that DecoTEC was unable to provide a backup for and, proving Murphy’s Law, it was also the one machine that had a major break down.

However, the Swiss manufacturers were able to fly in a technician complete with spare parts within a few days of the problem being diagnosed, so little time was lost.

The unexpected reinforcement meant bursting the blocks apart was more time consuming than expected. The burster had sufficient power to break the reinforcing steel if there was only one or two pieces within the concrete. Some blocks, however, had up to 20 pieces of reinforcing steel joining them to the next block, with the average being about eight. As there was no discernable pattern to the reinforcing steel, each block had to be burst sufficiently far apart so that the steel was exposed and could then be cut using oxy-acetylene cutting equipment or other methods as appropriate.

Once the wire sawing and bursting had been substantially completed, a 120 tonne crane was engaged from local company Transportes Montejo LTDA to lift the concrete blocks to the upstream side of the spillway.

In order to maintain vehicle access to the bridge that tops the dam, the crane could only be set up on the dam abutments. A series of comprehensive studies were undertaken into the complex rigging requirements involved in using the crane to remove the concrete blocks from under the bridge deck.

Because the additional steel reinforcement in the concrete slowed deconstruction, the time that the crane was on site grew from a budgeted 22 days to 43 days.

On the 11 bays that were to have fusegates installed, two trenches had to be formed in each bay. The trenches were up to 300mm deep and 500mm wide. A series of cuts were made the length of the trench and the concrete was then broken out using pneumatic breakers. In total about 270m of trench was formed across the top of the overspill crest to complete the project.