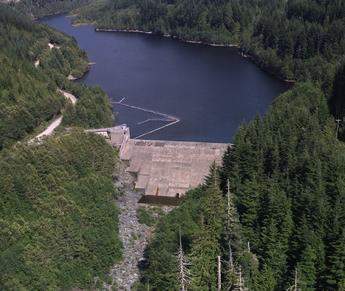 The organisation that is known today as the Canadian Dam Association (CDA) was founded in 1986. Its objective was to bring together individuals and organisations interested in dam safety, with a view to developing dam safety legislation in Canada and to advance the implementation of practice to ensure the safe operation of dams across the nation. Initially it was known as the Canadian Association of Dam Safety Officials, then Canadian Dam Safety Association in 1989 and, following a merger with the Canadian National Committee on Large Dams (CANCOLD), it adopted its current title in 1997.

In addition to concerns about technical, environmental, social, economic, legal, and administrative aspects of dams and their safety, the current association endeavours to be a forum for the exchange of ideas and experiences in the field of dam safety by:

• Promoting the adoption of regulatory policies and safety guidelines for dams and reservoirs throughout Canada.

• Providing information and assistance to dam owners in support of dam safety programmes.

Q. Who can be a member of CDA, and how do you apply?

A. Membership is open to anyone with an interest in dams and dam safety, including individuals, consultants, hydro companies, mining companies, other dam owners, suppliers, government departments, etc. People join to take part in the association’s annual conference and workshops and to contribute to the work of CDA.

Currently, members include staff of federal, provincial, and municipal agencies, as well as people from private organisations such as hydro companies and equipment manufacturers. Membership with us is of interest to people such as researchers, engineers, technologists, consultants, contractors, equipment suppliers, and dam owners. CDA has members worldwide.

CDA also maintains an e-mail list to remind members of upcoming events and notify them of engineering and technical job opportunities. Inclusion in the list is voluntary to membership.

Q. How is CDA funded?

A. CDA is funded by its membership fees and by conference surpluses; no direct government funding is received. Annual membership costs vary. An individual pays C$30 (US$25); a corporate membership is C$600 (US$500) for a large organisation (categorised as one that has a number of large dams under its control or influence and supports international involvement) and C$300 (US$250) for a small organisation (generally categorised as one that has only small dams under its control or influence). Student membership is only C$5 (US$4.3) per year.

Q. What services does CDA offer? Do you publish books, newsletters etc?

A. We publish a quarterly newsletter called the CDA Bulletin, conference proceedings, the CDA Guidelines and a Dams in Canada CD. In addition, CDA has a website which contains links to other organisations, details on the association and a job section.

Q. What do you think are the most significant contributions CDA has made to the development of the hydro industry?

A. CDA has enabled annual conferences to take place that were not being held previously. Its most significant contribution, however, is the CDA Dam Safety Guidelines, which have set a guide for dam safety within Canada.

In 1995, after three years of effort working with groups all across the country, the CDSA (as the association was known) issued the original Dam Safety Guidelines. In 1999 CDA published a revised version.

The guidelines have been in widespread use across Canada, but the 1999 version required some changes to reflect current thinking and, as time has passed, suggestions for improvements have been made. In 2003, CDA’s Dam Safety Committee started a project to acquire input and ideas for changes to the current guidelines, utilising the Internet and workshops across Canada to find out what its range of members suggested should be amended. The Dam Safety Committee collected all this information and incorporated it into a new set of guidelines.

The 2006 version of the guidelines consist of two parts:

• Principles – the fundamentals of dam safety, applicable to all dams.

• Practises and Procedures – methodologies and practices that may be used to meet the Principles.

The guidelines are applicable to all dams – new, existing and closed – within the definition of ‘dam’, outlined elsewhere in the guidelines. The practices are split into different sections: dam safety management; operation, maintenance and surveillance; emergency preparedness; dam safety review and dam safety analysis.

The 2006 Dam Safety Guidelines ‘Principles’ were presented at this year’s conference in Calgary, and further details can be found on the CDA website (www.cda.ca). The completed guidelines will be available later in 2006.

Q. How many conferences/workshops does CDA organise a year?

A. CDA holds an annual conference in different locations within Canada; last year’s was in Ottawa and provided a forum for discussion of current developments in the life cycle of dams including tailings facilities. Each conference has between two and four workshops prior to the start of the main conference, which have sessions on a variety of subjects.

At the end of last year, CDA hosted the 2005 Annual Conference, with the subtitle ‘100 Years of Dam Experience – Balancing Tradition and Innovation’, which run from 1 October to 6 October 2005 in the Westin Hotel, Calgary. Featured activities included workshops on tailings dam closure and reclamation, guidelines for extreme flood analysis, monitoring dams, and a practical approach to dam emergencies. Tours of Fort McMurry Oilsands, Rocky Mountain dams and Alberta Prairie dams were also offered.

The association also holds regional workshops as required – the most recent series being the push to complete the new Guidelines.

Q. Could you explain more about the CDA awards programme?

A. Through its awards programme (which started in 1993), CDA recognises and encourages outstanding achievements or contributions by its members to the Canadian dam industry. The awards are normally presented at the CDA banquet, held during the course of the association’s annual autumn conference which this year is to be held inï„µQuebec city. The deadline for nominations this year is 31 August.

There are four categories of awards. The Inge Anderson Award of Merit is offered every two years to a person who has distinguished himself/herself in the dam industry. The award recognises a person who has contributed significantly to the advancement of knowledge and practices related to dams in Canada. The last person to receive this award was Ray Stewart in 2004.

The third award is the Student Award, intended to honour and encourage students towards achievement in dam related disciplines. Judgement for this award is made on the basis of achievements and/or performance as demonstrated in one of the following areas: technical paper, research, and contributions in the workplace. The recipient receives a C$500 (US$430) cash award, plus one year’s free membership with CDA. All full-time university students in Canada are eligible. Gillian Tucker was the last winner of the award in 2005.

The final award is the Peter Halliday Award For Service. This award recognises the efforts of CDA members who have demonstrated outstanding commitment to CDA, and have made valued contributions to the advancement of the association. The award is offered annually to one or more members of the association, and in 2005 was given to both Marion Houston and Joe Groeneveld.

Other awards have been given out over the years, such as a Most Promising Professional Award for Marcia MacLellan in 1997 and an Innovation Award for Dr. Bo Chandra in 1996. A full list of past winners is viewable on the CDA website.

Q. How many people work for CDA and what are their backgrounds?

A. In general, CDA is a volunteer organisation. It employs myself as a part-time Executive Director, and my background is as a dam safety regulator and consultant.

Q. Finally, what is your vision for CDA and where do you see it in five years’ time?

A. Our immediate goal is to complete the CDA Guidelines. Our other goals relate to continuing with our commitments to ICOLD, increased numbers of workshops across the country, larger membership numbers and good management practises for the association and its members.