In what must be the world’s most ambitious building project, China is to construct an entirely new urban environment on the scale of a small city. 500 000 people will live in the new eco-city, the first to be built on entirely sustainable principles. Even the project staff are being encouraged to offset their personal carbon impact. Staff report 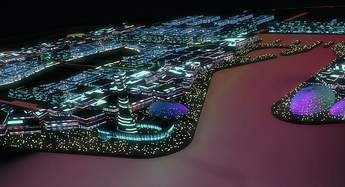 In August 2005 the Chinese government formally commissioned British design consultancy Arup to create Dongtan eco-city, a new urban development for 50 000 people on a 630 ha site near Shanghai. Arup, whose contract is with Shanghai Industrial Investment Corporation, is planning this, the world’s first ‘sustainable city’, on a site that will make it a suburb of the existing city. Its sustainability will depend heavily on being able to generate all its energy needs, including transport, from new technologies, including biomass/CHP plants, renewables (primarily wind turbines), recycling of organic materials including human waste, and developing technologies such as hydrogen fuel cells (for ’buses) and solar powered water taxis. Opening in 2010, it is to be a showcase for low-impact modern development and will be the largest of and a model for a number of projects China is undertaking to in its attempt to seriously implement the concept of sustainability.

Currently, formal approval of the master plan is being sought from the Chinese government. SIIC will then invite international investors to take part in the first round of funding.

China’s environment has suffered many problems over the last half-century – climate change, environmental pollution, and water shortages amongst them. Add to this the effects of a population of 1.3 billion people racing towards Western-style consumer society and the implications are potentially disastrous. Such a course could on its own push global ecosystems to breaking point. It is partly in response to this perceived and urgent need to find ways of using cleaner energy that the eco-city has been conceived.

Dongtan is located in a strategically significant position very close to Shanghai on Chongming, the third largest island in China, in the mouth of the Yangtze river. It is three-quarters the size of Manhattan and will be developed as a sustainable city to attract a whole range of commercial and leisure investments. The intention is to create a city where people will be able to live and work in a high quality environment. Arup’s sustainable urban design and planning is to be expanded into a blueprint for the future planning of Chinese cities. Indeed, the company signed a contract in November to work with SIIC on two further eco-cities.

Dongtan is a large area of mostly agricultural land. A high quality road infrastructure is currently being built to connect the island to the Shanghai mainland.

Arup’s approach to integrated sustainable urban planning and design will, it is expected, create a city with lower energy consumption and one which is as close to being carbon neutral as possible within reasonable economic constraints. The development is likely to define the future of sustainable urban development in China, and maybe beyond.

Arup will be responsible for the integrated master planning of the built environment in Dongtan. It is providing a full range of services, including urban design, planning, sustainable energy management, waste management, renewable energy process implementation, economic and business planning, sustainable building design, architecture, infrastructure and the planning of communities and social structures.

The new city will consist of three ‘villages’ to be buil in phases. The first phase should be completed by 2010, in time for the World Expo in Shanghai, and will accommodate a population of 50 000, rising to 500 000 by 2040. This phase will include a wide range of developments with urban parks, ecological parks and what are expected to be ‘world-class’ leisure facilities.

Priority projects include the process of capturing and purifying water in the landscape to support life in the city. It is intended that community waste management recycling will generate ‘clean’ energy from organic waste, reducing landfills that damage the environment. Combined heat and power systems will provide the technology to source clean and reliable energy and fit in with the plan to use a combination of traditional and innovative technologies to reduce the heating and cooling load created by the city’s buildings.

Both SIIC and Arup are committed to reducing carbon emissions on this project. Arup plans to offset emissions generated by its staff’s air travel during the project.Arup has formed a partnership with the emissions broker CO2e to make this possible. The Arup project staff are also committed to offsetting carbon emissions generated in their personal lives. In the UK, for example, this equates typically to an average of 9 tonnes of carbon dioxide per person each year.

For travel offsetting, the number of air miles travelled is used to calculate the amount of greenhouse gas emissions the flight creates. Project administrators log team flights and arrange to purchase the offsets from the project through CO2e.

Average emissions for individuals in the country of each office involved in the project are shown in the table opposite. Each tonne of CO2 equivalent offset costs US$10. Team members that join he scheme pay half of the cost of the credits by means of a salary deduction, the other half being paid by Arup. At the time of writing, 150 credits had been sold.

Arup’s payments will help to fund a mini hydro renewable energy project in Jihua, Zhejing province, China, under a scheme assisted by emissions consultant IT Power.

The new plant should generate some 430 MWh/a sustainably, and supply this electricity to the local villages. It is currently under construction and due for completion during 2006. It is expected to start generating electricity during late summer to autumn 2006. The plant will provide jobs in the local rural economy, as well as slowing migration from this rural area to the major cities.