Staying power – extending the life of the Norne field

Statoil has revealed plans to extend the life of its prolific Norne field in the Norwegian Sea to 2030. Julian Turner explores how robust maintenance, improved oil recovery rates and new discoveries could help the multinational to exploit the estimated 300 million barrels of oil equivalent that remain in the area. 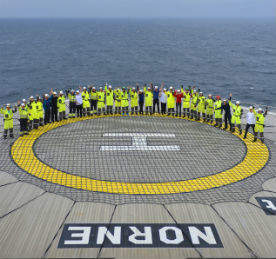 In January, however, a welcome success story permeated the gloom, with Norwegian multinational Statoil’s announcement that it plans to extend the production life of its prolific Norne field to 2030.

Norne came on stream in November 1997. To date, the subsea field and its satellites have produced 700 million barrels of oil equivalent (mmboe) for Statoil and its partners, Eni, Petoro and DONG Energy.

The recovery factor for the main field today stands at 56.5% – above Statoil’s own subsea production target of 55%, and a top result worldwide – and thanks to regular maintenance on the Norne floating production, storage and offloading (FPSO) unit, improved recovery rates from multiple subsea wells and a spate of hydrocarbon discoveries, Statoil is confident it can improve that number further.

"We aim to increase the recovery factor to 60%," states Kristin Westvik, Norne’s operations vice-president. "The remaining resources in the Norne area may total as much as 300mmboe: the equivalent of an Aasta Hansteen field.

"Thanks to the systematic maintenance of Norne for 17 years, the vessel is in a good technical condition."

"Thanks to the systematic maintenance of Norne for 17 years, the vessel is in a good technical condition. We have also aimed to facilitate improved recovery and the phase-in of new discoveries to the vessel. In light of this, we are now considering extending Norne’s life to 2030."

Norne came on stream from five subsea templates. Today, production flows from 15 templates and 26 exploration wells, including five key successes: the Norne, Stær, Svale, Dompap and Fossekall fields. Offshore activity is controlled from Statoil’s exploration hub in Harstad. The last subsea template to be installed was the Nkr10-billion Skuld fast-track project in 2013. The Alve field and the Eni-operated Marulk field have also been tied in to the Norne FPSO.

Flexible risers carry the well stream to the ship, which rotates around a cylindrical turret moored to the seabed; risers and umbilicals are also connected to the turret. The 6608/10 FPSO features a processing plant and multiple storage tanks in the hull to carry stabilised oil.

Gas has been exported from Norne since February 2001. It travels through the Norne gas export pipeline and the Åsgard Transport trunkline via Kårstø, north of Stavanger, to continental Europe. Originally earmarked for dismantlement in 2014, the field received its stay of execution after Statoil, Polarkonsult and Aker Solutions assessed the technical condition of the hull of the FPSO, aiming to determine whether it required a yard stay in 2018 to extend its technical life to 2030.

"The studies concluded that the hull structure is solid and that the life can most likely be extended to 2036," says Westvik. "We can thus make the necessary modifications at Norne in order to extend the productive life without bringing the FPSO ashore for an extensive period. This allows us time to thoroughly plan the road ahead for Norne 2030."

Statoil will establish a project in 2017 detailing the scope and investments in the rejuvenated field, and the Norwegian multinational will apply for Norne’s extended technical life by 2021.

Statoil can maximise recovery rates from the Norne field using microbial enhanced oil recovery (MEOR). It is currently thought to be the only company in the world to employ MEOR on an offshore field.

MEOR is a tertiary oil extraction technique that uses bacterial processes to wash more oil from the pores of reservoir rocks than would be possible using traditional primary and secondary recovery methods, such as water. This means the residual two thirds of immobile oil that typically remains in a reservoir can be recovered, increasing the life of mature plays such as those in the Norne field.

The prime consideration in using MEOR is how much additional oil can be produced by stimulating the growth of indigenous or injected bacteria. To grow, the bacteria require carbon from the oil and nutrients from the water, and need to be able to penetrate the oil/water interface to access the carbon.

Collaborative research involving Statoil and Norway’s Sintef foundation has taken MEOR to the next level, quantitatively monitoring changes in interfacial tension (IFT) – the force holding the surface of the rock together – at an oil/water interface, using an advanced laser-light scattering technique.

Researchers induced a 6,000-fold exponential reduction in the IFT using a biosurfactant (tenside), which reduces the IFT and thus lowers the energy needed to break through and extract the oil.

Statoil’s has also undertaken research with the Norwegian University of Science and Technology, looking into chemical enhanced oil recovery (CEOR) using alkaline-surfactant-polymer flooding, with a view of producing extra oil and significantly reducing water-cut in the Norne field’s declining C-segment.

The decision to extend the life of the Norne field comes in the wake of significant new oil discoveries in the area, most notably in the Svale North prospect and the Skuld field on the Halten Bank.

Recoverable estimates for Svale North are 6-19mmboe, while Skuld may contain 90mmboe and is the largest development field in Statoil’s fast-track portfolio – this being the name given to Statoil’s standardised development solutions for small, marginal fields. With large independent discoveries on the Norwegian Continental Shelf a rarity, Statoil’s 12 fast-track projects are designed to cut development times in half, from about five years to just two and a half, as well as boosting production curves and maximising profits from uncomplicated fields such as Norne.

"We are envisioning production until 2030 at least, and there are opportunities for new activities involving exploration and further development in the Norne area."

"Skuld’s size makes it stand out in the fast-track portfolio," explains Anita Andersen Stenhaug, vice-president of the Norne field. "It could easily have been developed as a stand-alone field. We chose this solution because we saw the opportunity to use the technology and expertise intended for rapid developments, and because we could connect to the existing infrastructure on Norne. This has made it possible to complete the project three years after discovery.

"Skuld will have a very positive impact on Norne’s lifetime, which was estimated to 2021 without this addition," she adds. "We are envisioning production until 2030 at least, and there are opportunities for new activities involving exploration and further development in the Norne area.

"With the technological development projects we now have underway, we are also envisioning opportunities for increased recovery from existing fields."

Statoil’s standardisation strategy, combined with its commitment to R&D – in the form of enhanced oil recovery, and a strict offshore maintenance and repair regime – are key weapons in its fight to prolong production from the Norne field. This will strengthen Norway’s position as the world’s third-largest natural gas exporter, and as the largest oil producer and exporter in Western Europe.

Production began from the Norne field in the Norwegian Sea on 6 November 1997.

The field has been developed with a production and storage ship tied to subsea templates. Flexible risers carry the wellstream to the ship, which rotates around a cylindrical turret moored to the seabed. Risers and umbilicals are also connected to the turret. The ship has a processing plant on deck and storage tanks for stabilised oil.

Gas has been exported from Norne since February 2001. It travels through the Norne Gas Export pipeline and the Åsgard Transport trunk line via Kårstø, north of Stavanger, to continental Europe.

The field is roughly 1,400km from the landfall at Dornum in Germany.