State of play – is the US ready for offshore wind energy?

With three projects expected to begin construction over the next 18 months, the long-awaited birth of the US offshore wind sector is almost upon us. But how ready is the nation to support this fledgling industry? Jack Wittels speaks with Kevin Pearce of Arcadia Windpower and Chris Elkinton of DNV GL about the country’s infrastructure and the lessons to be learnt from Europe. 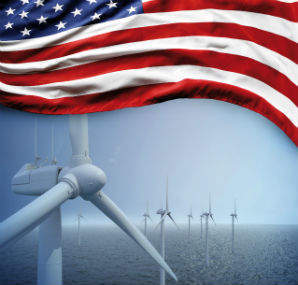 Having waited in the wings for so long, the US offshore sector has acquired an almost mythical status. As far back as 2010, a government report trumpeted that more than 4,000GW of potential energy lay waiting off the country’s coasts – a figure approximately four times the current capacity of the US electric grid. But, four years later, a commercially operated offshore wind turbine has still yet to generate a single kilowatt-hour.

However, with three projects currently vying to be the US’s first offshore wind farm, the myth finally looks set to become a reality. Off the coast of Cape Cod in Massachusetts, the 468MW Cape Wind development is expecting to complete its financing in the second half of this year. Deepwater Wind’s 30MW Block Island Wind Farm, located in Rhode Island state waters, plans to begin offshore construction in 2015. The controversial Fishermen’s Energy Atlantic City Wind Farm, also in the running, has recently received a major financial boost in the form of a federal grant of up to $47 million.

Of course, this is not the first time the US’s offshore sector has seemed close to opening a wind farm. Back in 2007, Bluewater Wind secured the first US power purchase agreement (PPA) for a project off the coast of Delaware, only for it to be put on hold in 2012. Several other requests for proposals (RFPs) for PPAs were also made for other developments around the same period.

The subsequent failure to deliver is often attributed to the financial crash of 2008, which destroyed vital credit sources for the industry. The perpetual uncertainty surrounding the production tax credit (PTC), investment tax credit and Department of Energy loan programme subsidies have also hampered investment.

The time is ripe

While doubt still hangs over the federal incentive programmes, many within the sector believe that this time, US offshore will finally make the leap. For Kevin Pearce, senior vice-president of engineering and development at Arcadia Windpower, there has been a fundamental change in how US politicians and the broader public think about offshore wind.

"Back in 2006-08, the focus was very much on the environmental attributes of a project," he says. "While that is still important, people are now also looking at whether a project can bring jobs and economic development to an area. This emphasis is really helping to support offshore."

Pearce’s enthusiasm for the sector is echoed by Chris Elkinton, offshore technical lead at DNV GL. A regular at industry events, he has seen a shift from general interest in offshore to a much stronger focus on practicalities – a clear sign of serious intent.

"The people I see at the conferences are interested in actually doing the work now," he says. "They’re not looking to get into the industry, it’s much more along the lines of, ‘I’ve got a project, I need lifts, let’s go and do it.’"

While a more practical focus is certainly welcome, it also highlights the challenges ahead. Offshore requires an array of specialist boats for installation, along with heavy-lift port facilities and engineering expertise. The US may have the drive to develop this budding sector but does it have the equipment?

Pearce believes it does – for the time being at least. "Vessels are available, and there’s also the possibility of using foreign boats for construction within the Jones Act without requiring any waivers or special permission," he says. "However, if the pace of development accelerates, there could be a shortage."

"We can use the existing US oil and gas fleet in the Gulf of Mexico for our first few construction projects," Elkinton agrees. "To install smaller turbines, it’s possible to fasten a crane to a jack-up barge that’s tall enough to install nacelles and rotors.

"However, reserving these vessels far enough in advance will be difficult without a firm timeline. We’ll also be facing competition from offshore developments in Europe and Asia, as well as oil and gas projects over here.

"There’s lots we can learn from the oil and gas sector," he continues. "They’ve been doing offshore construction in the US environment for years, so we can use that expertise."

While useful, oil and gas vessels will also struggle to install the larger turbines of 6MW or more – a major problem for an industry moving towards larger models. Elkinton believes vessels will have to be brought over from Europe, though the Jones Act will require feeder boats to bring components from ports to the installation vessels. "Eventually, we’ll have to build our own fleet," he says.

His views on US ports run along similar lines: able to support a fledgling industry, but upgrades are required to sustain a major wave of development. Most can facilitate basic maintenance operations with minimal investment already, but, with many designed for container shipping rather than heavy bulk cargo, the strong quaysides and staging areas required for offshore wind construction are still needed.

He does, however, remain optimistic. "When I go to conferences, plenty of infrastructure people are there watching, and they’ve told me they’re excited about the industry and its potential," Elkinton says. "Speaking to port owners and operators, it was clear they were looking for enough of an industry to justify spending the necessary capital to upgrade their ports."

Some have already decided to go ahead. In the port of New Bedford, Massachusetts, a $100-million facility designed to support the construction, assembly and deployment of offshore wind projects is taking shape.

Weeks Marine, a construction and dredging company, is also currently building the first US vessel specifically for offshore developments: a jack-up barge capable of working in depths of up to 30m.

"As long as the offshore wind projects make economic sense, the infrastructure will be built to support them," says Elkinton. "The two will develop in tandem."

Pearce also believes that, with a secure pipeline of offshore projects, the necessary equipment and infrastructure will follow. The real challenge is to convince investors that the industry is viable. There is no getting around offshore’s high capital cost, even in comparison with other renewable technologies. The unreliable government subsidies are also problematic.

"Their uncertainty has had a chilling effect on offshore wind. And if you look at the American Wind Energy Association’s stats for onshore, you can see that the rises and falls in the number of projects completed is dictated by whether or not the PTC is renewed," says Pearce.

"We tend to be a little short-sighted when it comes to energy policy, and that doesn’t fit well with the long development time we find for offshore wind," says Elkinton. "But the high capital cost comes from this being a new industry in the US. As we develop the infrastructure and gain experience, the risks will be understood, and that cost will come down. There’s also a strong case to be made when you look at the big picture and consider the environmental price."

Elkinton also believes the US has a lot to learn from Europe, where offshore capacity is currently at 6.6GW. Some US projects have already sent teams across the Atlantic on fact-finding missions, and most are making use of European expertise.

"The logistics will be slightly different over here: most of the manufacturing for offshore turbines is still in Europe, so we’re not just talking about transit from a staging port, we’re talking about transit across the Atlantic," says Elkinton. "You might have the case where the feeder vessel comes straight from the European factory, delivers components to the site, then goes back and gets more as needed."

With the US’s first offshore port to be located in Masachussetts, the Cape Wind project situated off Cape Cod and the Deepwater project in Rhode Island waters, the Northeast looks a likely candidate for the first US hub. The high population density and subsequent power demand, difficulty in importing energy from other parts of the country and interest in renewables also adds to the area’s appeal.

Home to the other two leading offshore projects, the Mid-Atlantic area also has strong potential. Maryland is particularly promising: in 2013, legislation was passed requiring a percentage of its electricity be generated by offshore from 2017, and a lease auction for an 80,000-acre area ten to 30 miles east of Ocean City is due to be held later this year. The Port of Paulsboro, in New Jersey, has also invested heavily in offshore facilities.

A 2013 report by Navigant for the Department of Energy estimates that, by 2020, US offshore wind capacity will fall just shy of 4GW – assuming 11 projects the report classes as being at an advanced stage do move forward. Beyond this short time frame though, it is almost impossible to predict the future of the sector – so much depends on the next few years.