Small dams: a big cause for concern in Vietnam

Research from a rural commune has demonstrated the need for adequate risk based assessment, responsibility and accountability for small dam safety management in Vietnam. Tuyet Thi Dam, Dr John D Pisaniello and Professor Roger L Burritt explain why the importance of small dam safety should not be underestimated 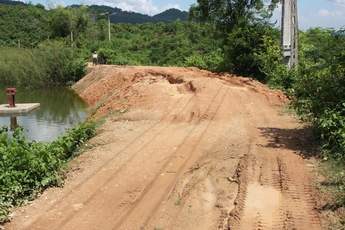 Vietnam has one of the largest dam systems in the world along with China and the US. [7] The Vietnamese dam network comprises over 750 medium and large dams and thousands of small dams. [7,33,38] Small dams are mainly used for local drainage and irrigation and make a substantial contribution to water resource development as well as the socio-economic development of Vietnam, particularly in rural areas where 70-80% of the population makes a living from agriculture. [17,33] The Vietnamese Ministry of Agricultural and Rural Development specifies that small dams are a fundamental part of hunger eradication and poverty reduction in poor rural provinces across the country. [18] However, in many of these provinces the safety of small dams is proving to be a key challenge to dam catchment management.

Across Vietnam there is currently no national dam safety programme or an overall strategy for the safe management of dams, particularly small ones. [26] The majority of small dams are owned by the government and are currently operated and managed by farmer/user associations or local people’s committees. [13,20] The current regime has created the situation where no specific individuals or organisations take legal responsibility for proper dam safety management and dam failures. [37] The problems associated with public ownership but no public control are based on opportunities for individuals and organisations to gain the benefits from dams while overlooking responsibility for adequate surveillance and maintenance.

At present Vietnam has no national record of either small dams or their problems. Nearly 100% of small dams are soil/earth dams which have been built since the 1970s and during the Vietnamese War. A majority of dams were built with inferior design and poor construction standards because of lack of adequate design knowledge, construction equipment, materials such as cement and concrete, and construction technology. [26,38] For many years, maintenance of and investment in safety has been insufficient. [1]

There has been no systematic collection of data on dam failures and there have been no specific approaches to determine associated impacts or economic losses of failure. Many dam safety problems and notable dam failures have occurred in various provinces in Vietnam but have often been unreported. These failures have taken hundreds of lives and have caused devastating impacts on property and environment. [24,26,33] For example, the 2000ML reservoir of nha Tro Dam failed in Nghe An province in 1978 causing the death of 27 people and damaging thousands of hectares of rice fields. In 1986, the overtopping failure of Dau Tieng dam damaged: 3452ha of mature rice (ready for harvesting); 1144ha of early rice; 1197ha of farming products; 871ha of fruit; flooded 3114 houses; and disrupted 47 houses.

The failure of the 500ML Buon Bong dam storage killed more than 30 people and caused thousands of dollars of damage. In 2002, Am Chua dam in Khanh Hoa failed but no records of damages and losses were available and recently in 2009, the 250ML reservoir of Z20 dam failed and about 200m of railway embankment was destroyed.

The safety of small dams and responsibility and accountability for their management in Vietnam are matters of great concern. However, the degree and scope of the safety issues are unexplored because little information has been recorded and reported publicly. The responsibility and accountability associated with unacceptable hazardous dams and/or dam failures remains to be examined. In order to fill the gap in the understanding of small dam safety management in Vietnam two research questions have been addressed:

• 1. What are the physical signs of problems associated with small dam safety in Vietnam?

• 2. What are the factors contributing to small dam safety problems in Vietnam?

In this article, dams refer to water storage dams that can be used for irrigation, drainage, water supply, flood control and hydropower. Small dams are all dams of less than 15m in height and with a storage capacity of less than 3000ML. [13] This definition of small dams is similar to icold’s definition (2007).

The research was designed in two stages.

Stage 1: Fifteen qualitative interviews were conducted within five key stakeholder groups during September and October 2010. The interviews involved three stakeholders in each group including:

• Group 1: Policy regulators, members of Water Resources Administration, Ministry of Agriculture and Rural Development or members of Vietnamese government’s Policy and Laws Board on Dam Safety Management, who take the most responsibility for dam safety management at the macro level.

• Group 2: Researchers and consultants who are working in the dam safety management field in national research institutions and international organisations in Vietnam.

• Group 5: Members of the local community who are living close to dams and bearing the dam safety threats in Tan Moc commune.

Stage 2: An embedded case study was carried out containing ten on-site surveys which were conducted on purposively selected dams in Tan Moc commune, Luc Ngan district in Bac Giang province. Bac Giang province was selected as an overall indicative case study as it is one of the country’s provinces with a large number of mostly small dams. [10,11,18] Available data show that dam failures occur every year and have caused severe property and environmental damage in the province. [21,22,23] All dams selected for on-site surveys in the fieldwork had to be less than 15m in height, with a storage capacity of less than 3000ML and be significant or high hazard dams based on an initial assessment of the dam size, living activities and economic development in the downstream inundation area [2,3].

The constant comparative method [4,6,12,36,34,14] was used for interview data analysis. Answers by each interviewee were scrutinised and compared to evaluate consistency as well as conflicts in their conversations. In addition, answers to each question were scrutinised and compared across interview participants to identify similarities and differences among different stakeholders.

An extensive set of photos were taken and stored separately for each individual dam. In addition, on-site survey assessment of each dam was written on a dam inspection checklist. All photos taken in the on-site dam surveys were analysed by the photo-interpretation method which is widely used to assess objects or semiotics. [5,8,32,35]

According to the stakeholders interviewed most dam failures in the past coincided with the occurrence of weather extremes, especially floods and heavy rains. The majority of participants believe that floods and heavy rains make a considerable contribution to dam failures in many rural provinces in Vietnam. In addition, landslide is seen as another cause of dam failure particularly in the northern mountainous provinces such as Tay Bac, Hoa Binh and Ha Giang provinces. The age of dams is also another concern as dams built over 30 years ago during the Vietnam War appear to have enormous safety problems. The safety of these dams is inherently compromised because of inadequate design and construction.

Stakeholders expressed the view that subjective (human) factors are undoubtedly the dominant cause of the current poor dam safety status and dam failures. In general, human factors are seen by the key stakeholders as important or as more important for dam safety than the impacts of natural extremes and the age of dams. There are a number of human factors involved (see table far right).

The first two factors indicate the lack of responsibility and accountability that has a direct and strong influence on the safety of dams. The stakeholders reported that no specific individuals and organisations have taken responsibility for dam failures in the past. In addition, no individuals or organisations take responsibility for dam repair, review, surveillance and maintenance as well as the setting of safety standards. Poorly defined and implemented accountability at both the central and local levels leads to the dam safety problems arising in various ways.

Furthermore, most participants did not correctly identify or understand the basic concepts of dam safety risks and hazards associated with dam failure. On the one hand, the explanation of the participants indicated that a large number of dams are currently at high risk of failure and many dams are potentially hazardous. On the other, most of the stakeholders insist that small dams only constitute low threats. Such unawareness and the absence of risk based assessment guidelines undoubtedly play a significant contribution to physical dam safety problems.

The majority of participants regarded poor dam safety management at the local level as an influential factor. Six main problems were identified as causing dam safety deficiencies. They include:

• A lack of adequate operation manuals and management guidelines for dam managers.

• Many stages including dam planning, design and construction; operation and review; monitoring and surveillance; and remedial works and maintenance are poorly implemented.

• There are insufficient funds for different stages of dam safety management.

• The local community has no or little influence on other stakeholders, such as policy regulators, local authorities and dam managers, to improve the current dam safety status.

The findings provide strong evidence that small dams in Tan Moc commune in Vietnam constitute destructive threats to the downstream community, property and environment. As a result, there is a critical need for the Vietnamese government to develop appropriate guidelines and introduce an adequate accountability and assurance policy for the operation and management of small dams.

The results provided suggest that the importance of small dam safety management should not be underestimated. On the contrary, greater attention should be paid to this issue. This research reaffirmed a concern arising through prior research that if dams are not managed properly, then all dams, large and small, high and low hazard, pose considerable safety risks because of the potential for failure either at the individual and/or cumulative level within catchments.

There appears to be a need for adequate risk based assessment, responsibility and accountability policies for small dam safety management in Vietnam, and related to this need, it also appears important for the Vietnamese government to place a higher value on lives, property and the environment of downstream communities. Future research can explore how such accountability and assurance policies can best be provided in Vietnam.

Tuyet Thi Dam is a masters scholar in Business and Management, and Dr John D Pisaniello is a senior research fellow at the Sustainable Engineering and Law Group, Centre for Accounting Governance and Sustainability, University of South Australia. Professor Roger L Burritt is the Director of the Centre for Accounting Governance and Sustainability at the University of South Australia’s School of Commerce. Email: damtt001@mymail.unisa.edu.au; John.Pisaniello@unisa.edu.au; roger.burritt@unisa.edu.au