18 December 2003 was a crucial date for the European nuclear power business. It saw the first signing of a contract for a new nuclear power plant since 1991, when the order for EDF's Civaux plant was placed. The new plant, Olkiluoto 3, will be the biggest nuclear unit ever constructed. 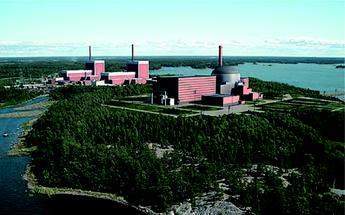 This year will be devoted to site preparation for Olkiluoto 3, Finland’s long awaited fifth reactor, with construction proper – first permanent concrete – scheduled to start in spring 2005. Excavation, eventually involving the moving of 450 000 m3 of earth, was officially inaugurated on 16 February 2004 by Finnish Minister of Trade and Industry, Mauri Pekkarinen. Site work started in December 2003 with forest logging and road building.

To start excavation work so quickly after the investment decision is seen by the plant’s developers as “yet another strong signal of the vigorous progress of the project.” The CO2-emissions-free electricity generated by the new pressurised water reactor will also help Finland meet its Kyoto obligations, Timo Rajala, CEO of Pohjolan Voima Oy (PVO) and Chairman of the Olkiluoto 3 Construction Committee, pointed out.

Developer, owner and operator of Olkiluoto is Teollisuuden Voima Oy (TVO), a 56.8 per cent owned subsidiary of PVO. TVO owns the two existing Olkiluoto boiling water reactors and is a participant in the Meri-Pori coal-fired power plant.

In total, the Olkiluoto 3 project is being financed by over 60 Finnish companies, to which the electricity generated by the plant will be delivered.

The new reactor will be put into operation in 2009.

In May 2002, the Finnish Parliament ratified the Council of State’s positive decision in principle based on TVO’s application to construct a new nuclear power plant. TVO started the bid competition at the end of September 2002 and received in March 2003 several offers for boiling water and pressurised water reactors and steam turbines. In the middle of October, TVO selected Olkiluoto as the location of the new unit and the Framatome ANP – Siemens consortium as the preferred bidder.

On 18 December 2003 TVO signed a turnkey contract with the Framatome ANP – Siemens consortium for construction of the 1600 MWe (net), 4300 MWt, plant. The nuclear island is to be supplied by Framatome ANP and the turbine island by Siemens.

It is a fixed price contract, with the consortium having total responsibility for plant equipment and buildings, construction of the entire plant up to and including commissioning (excluding excavation), licensability, schedule and performance.

The overall project cost has been estimated by TVO at around 3 billion euro.

The 1720 MWe steam turbine, based on German Siemens technology, with the 1300 MWe Emsland PWR as reference, will be the largest capacity steam turbine ever produced. The previous record holder was the 1550 MWe Arabelle steam turbine, as used in France’s N4 pressurised water reactor series.

The Finnish government sees Olkiluoto 3 as consistent with the central aim of its energy policy, which is to “secure a competitive energy supply while also meeting the obligations associated with its international environmental commitments.” During the last decade, the average yearly growth of electricity consumption in Finland, at 2%, was the fastest of all the Nordic countries.

Electricity consumption per capita is high, about 15 600 kWh per year, mainly due to the climate and the country’s energy intensive industrial base, notably pulp and paper. But it imports more than 70% of its total energy and about 15% of electricity needs. Nuclear power, provided by four existing reactors (total capacity 2656 MW) contributes about 26% of the country’s electricity.

According to a study by the University of Technology, Lappeenranta, the long-term average price of nuclear electricity is lower than the price of electricity produced by coal or gas when load factors are around 90%.

Also, under the Kyoto Protocol and the EU’s burden sharing agreement, Finland is committed to limiting its average greenhouse gas emissions during the period 2008-2012 to the 1990 level.

The EPR was developed by Framatome and Siemens, whose nuclear activities were combined in January 2001 to form Framatome ANP, a subsidiary of AREVA and Siemens. EDF, together with the major German utilities played an active role in the project. The safety authorities of the two countries also joined forces to bring their respective safety standards into line and draw up joint design rules for the new reactor.

Project objectives included meeting the “European Utility Requirements”, a specification drawn up by electricity companies in Europe, including Belgium.

Another objective was to improve the competitiveness of nuclear energy relative to fossil fuels. To that end the EPR aims to generate electricity that is 10% cheaper than that generated in the most recent reactors in operation.

The basic EPR design work was completed in 1999. It was followed by technical and economic optimisation studies. The related investment was shared between Framatome, Siemens, EDF and German utilities.

The EPR, which can be regarded as evolutionary not revolutionary, builds on the N4 reactors in operation at Chooz and Civaux and the Konvoi units operating at Neckarwestheim 2, Emsland and Isar 2 – with additional innovative features stemming from research programmes carried out by the French CEA and at Karlsruhe.

Thanks to improvements made to equipment and components, no major upgrading operations should be required during the first 40 years of operation (unlike today’s fleet of PWRs where steam generator replacement has become all too routine).

The expected cost savings will arise from the optimisation of a number of factors: higher power than the largest recent plants (1600 MWe vs 1450 MWe); shortened construction time; fuel efficiency increased to over 37% (unprecedented for a light water reactor), with 15% less uranium per kWh generated and therefore reduced waste and lower fuel cycle costs; and longer service design life (from typically 40 years to 60 years).

The general layout of equipment is designed to provide easier access and simplify maintenance operations. Routine maintenance of safety-related systems can be done without shutting down the plant, while the scheduled refuelling outage has been shortened, contributing to increased reactor availability.

As a result of all this the cost of electricity generated by the EPR is expected to be significantly lower than that produced by gas-fired stations, Framatome ANP says. This, according to the company, includes an allowance for “external” costs associated with R&D, spent fuel reprocessing, waste disposal and decommissioning. Fossil costs, in contrast, do not usually take account of “externalities.”

After harmonising their regulations, the French and German safety authorities laid down two requirements, both of which have been met in the

• additional measures to prevent the occurrence of events likely to damage the core; and

• increased protection against the

The safety functions are performed by a variety of simple, redundant systems, with increased automation. Each of the main safety systems is subdivided into four identical subsystems that perform the same function when an abnormal operating situation occurs, in particular the cooling of the core, ensuring that the safety function is always

performed. The subsystems are totally

independent and are housed in four separate buildings.

They have been kept strictly separate. Thus, whenever the slightest fault occurs in one system due to internal or external factors, another can take over and perform the required safety function.

The likelihood of core damage occurring in current pressurised water reactors is already extremely remote but the EPR safety system architecture reduces it even further, by a factor of 10, says Framatome ANP.

The reactor building rests on a thick concrete base mat and is enclosed by a double shell. The inner containment is made of leaktight, prestressed concrete with a metal liner and the outer one of reinforced concrete, each is more than 1m thick. This total of more than 2m concrete thickness is also capable of withstanding external hazards such as an aircraft crash.

Even in the highly unlikely event of the

core melting, then piercing the reactor

vessel and escaping, it would be contained

in a dedicated spreading compartment. This compartment is then cooled to remove the residual heat.

With the EPR, this type of extreme event would not extend beyond the reactor containment. The immediate vicinity of the plant, the subsoil and the water table would be fully protected.

The EPR aims to have a collective dose

close to 0.4 manSv per reactor per year, as opposed to the 1 manSv which is the

According to Framatome ANP, numerous studies have shown that the production cost of nuclear electricity compares favourably with combined cycle gas plants.

The comparative advantages of nuclear energy are even more striking if the impact of carbon emissions on the environment is considered from an economic point of view, as stipulated in the European directive on release permits, scheduled to come into force in 2005. The challenge is clearly enormous, given the orders of magnitude involved, with savings of hundred of millions of metric tonnes of CO2 to be made for Europe alone, Framatome ANP notes.

The decision to generate nuclear energy reduces dependence on potentially vulnerable supply sources in politically unstable regions (where much oil and gas is found). Moreover, far from being inexhaustible, these fossil fuels are likely to reach a production peak in the middle of this century, after which they will start dwindling again.

As Framatome ANP says, “Finland is definitely paving the way for European recognition that nuclear energy as a key element of the future energy mix.”