Westinghouse deployed a test build of an advanced simulation technology to investigate the neutronics of the AP1000 first core load, which features a new mechanical shim technique to control reactivity. Results were found to agree well with the results of Monte Carlo calculations. By Fausto Franceschini, Bob Oelrich Jr and Jess Gehin 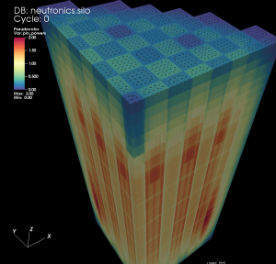 The Consortium for Advanced Simulation of Light Water Reactors (CASL) is a U.S. Department of Energy (DOE) Energy Innovation Hub, researching and developing advanced modelling and simulation capabilities for improving the prediction of commercial nuclear power plant operation. The advanced modelling and simulation capabilities (methods, models, and computational tools) under development by CASL are part of the Virtual Environment for Reactor Applications (VERA), which will ultimately provide high-fidelity coupled simulations for commercial nuclear reactors. (The key functional components of VERA are shown in Figure 1.)

A critical success factor for CASL is to transfer its technology to external stakeholders. CASL is supporting early deployment of its research through ‘test stands’ that represent a deployment of VERA into an engineering environment for an application chosen by the test stand host. Westinghouse, as a leading reactor vendor involved with the design, construction and technical support for commercial reactors, provides an ideal initial test environment to demonstrate and evaluate the capabilities and tools developed by CASL. In June 2013, Westinghouse was selected by CASL to host the first such test stand.

To perform the test stand simulations, VERA has been installed on an engineering computer cluster at Westinghouse comprising a total of 608 computer cores with 5.6 TB of memory. The test stand provides the opportunity to exercise and improve the VERA code installation, build and update process, and is instrumental in establishing a streamlined approach for this process. The Westinghouse VERA build is now fully operational and being used by Westinghouse engineers.

Westinghouse selected a challenging application for its VERA test stand: simulate startup conditions of the AP1000® pressurized water reactor (PWR) first core. The AP1000 reactor is an advanced reactor design with enhanced passive safety and improved operational performance. The AP1000 PWR is the first Generation III+ reactor to receive design certification from the U.S. Nuclear Regulatory Commission, and there are eight units currently being built, four in China and four in the US. The AP1000 PWR first core design is a considerable advancement compared to past first core designs, with a novel uranium zoning scheme that allows more efficient and cost-effective fuel usage and the MSHIM™ operation and control strategy. The MSHIM (mechanical shim) strategy shifts reactivity control primarily to rod control, eliminating both additional plant systems to support constant changes to the concentration of boric acid within the reactor coolant. MSHIM provides robust core reactivity and axial power distribution control with minimal changes to the soluble boron concentration in the reactor coolant during both normal operation and power manoeuvring scenarios. This strategy takes advantage of an increased presence of control clusters during at-power operation.

The streamlined VERA common input format allows Westinghouse to model and execute all downstream calculations, for example, neutronics and thermal-hydraulics for the advanced AP1000 PWR first core through a single input deck. The format of this input initially was found to be intuitive and comprehensive and, after a short learning period, Westinghouse engineers were able to set up a complete 3D core model of the AP1000 first core in a compact ASCII code file. A depiction of part of the AP1000 first core is given in Figure 2.

The core physics calculations for the AP1000 PWR have been performed using VERA-CS, the core simulator of VERA. VERA-CS includes several innovative features compared to current industry core simulators. For instance, VERA-CS performs whole core pin-by-pin neutron transport with on-the-fly cross-section calculation, an approach that leads to higher-fidelity simulations where the specific environment of every pin in the core is explicitly taken into account. For comparison, current industry core simulators are typically based on neutron diffusion, which is an approximate formulation of the neutron transport equation, and rely on pre-generated lattice data for coarser mesh core calculations. This approach leads to approximations in the reconstruction of the local pin power and environmental effects.

The reliance on high-fidelity methods alone is not sufficient to ensure the validity of the VERA-CS results, which together with its early stage of deployment made results validation a paramount activity for the test stand simulations. While earlier work has shown excellent agreement in the VERA-CS startup core predictions with plant measurements for the Watts Bar Unit 1 first core, actual measurements for the AP1000 PWR first core will only be available upon reactor startup. In lieu of actual measurements, confirmation of the VERA-CS results has been accomplished by comparing the results to Monte Carlo simulations. The Monte Carlo approach to particle transport has no geometry or energy discretization, unlike deterministic solution techniques. While it is computationally intense, it is nonetheless useful for numerical benchmarking. Two Monte Carlo codes have been employed to benchmark VERA-CS results for the AP1000 PWR simulations: KENO, which is part of the Oak Ridge National Laboratory SCALE package, and SHIFT, a Monte Carlo code developed by CASL for use on massively parallel computers.

Detailed power distributions have also been calculated for several configurations, including 3D multiple assemblies simulating the central part of the AP1000 PWR core, with the Axial Offset bank partially inserted for axial power distribution control. Comparison with corresponding Monte Carlo simulations (Figure 3) indicated good agreement for VERA, with a root mean square of the difference in pin power below 1 percent. The power distribution comparison for VERA versus the CASL Monte Carlo code, SHIFT, for a 3D core simulation is shown in Figure 4, and is also reasonable.

"While more extensive comparisons need to be performed in the future, the results so far are promising."

To obtain a power distribution over the entire 3D core geometry with low computational statistical uncertainties, the SHIFT Monte Carlo simulation required a five-hour computer run with 1012 particle histories performed on 232,000 cores at the ORNL ‘Titan’ Leadership Computing Facility, as part of a 60-million core hour allocation that a joint Oak Ridge National Lab and Westinghouse team was awarded during this project. These are postulated to be the largest Monte Carlo simulations ever performed for a commercial PWR reactor, and provide a unique set of high-fidelity numerical solutions valuable for code benchmarking activities.

While more extensive comparisons need to be performed in the future, the results so far are promising. VERA-CS could make it possible to obtain reliable high-fidelity predictions for a range of commercial reactors and operating conditions that could be used to anticipate and mitigate operational issues, resolve discrepancies with plant measurements, benchmark new methods and corroborate the design of advanced cores.

The CASL team is now working to extend the suite of simulation capabilities to the entire range of operating conditions for commercial reactors, including full-power operation with fuel depletion and multi-cycle reload analysis. As the development proceeds, Westinghouse will continue to obtain VERA code updates as they become available, and plans to extend the AP1000 reactor simulations to cycle depletion with coupled thermal-hydraulics.