Siemens has upgraded the rating of its direct drive 7 MW offshore wind turbine to 8 MW. Siemens says that the resulting machine, designated SWT-8.0-154, represents a significant decrease in LCoE (levelised cost of energy) for the technology and another step towards grid parity for offshore wind. The 8 MW turbine is based on the existing offshore direct drive platform, but incorporates some evolutionary improvements that will allow the 8 MW version to be brought to market very quickly. 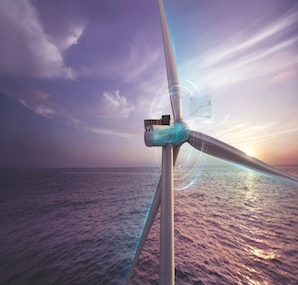 A prototype SWT-8.0-154 will be installed at a test site in Østerild, Denmark, in early 2017, and will exhibit an up to 10% higher level of annual energy production (AEP) under offshore wind conditions as compared to the 7 MW model. The offshore direct drive platform, says its maker, enables a significant reduction in the LCoE, and at low risk – that is, very few components in the new model have been changed, which takes advantage of the established reliability and performance of the brand. Type certification for the 8 MW turbine is expected to be obtained at the beginning of 2018.

The new turbine has a rotor diameter of 154 m, the same as its predecessor model, but in a suitable location can generate up to 10 % more energy per year. The upgrade has been made possible by installing more powerful permanent magnets than those introduced in the SWT-7.0-154, a step achieved by changing the magnet material, in co-operative effort with the manufacturer. To ensure that they can operate at the greater power level, design changes were also made to the converters, which have a modular design so they can be adapted to a variety of turbine power levels. It was therefore a relatively simple matter to extend them to the higher generator output.

Proven components of offshore direct drive technology, including the B75 blade and the medium-voltage transformer, remain the same. From long-term observations of the 7 MW machine, engineers concluded that the mechanical elements, such as the bearings, will remain stable when operating with the higher torques.