In June Siemens announced its first order from China for SGT-800 gas turbines. The delivery will consist of four SGT-800 machines (rated at 54 MW each) and the associated generators. The turbines will be installed in the Shanxi Guoxin Baode and Xiyang decentralised energy projects in central China. The fuel will be coalbed methane. 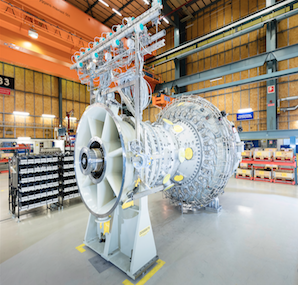 The gas turbines will be installed in two 2-on-1 combined cycle power plants with heat extraction, which will have an overall capacity of 308 MW. The customer is Shanxi Natural Gas Limited Company, a subsidiary of Shanxi Provincial Guoxin Energy Development Group Co, Ltd. Commercial operation of the plants is scheduled for July 2017.

“This first order of SGT-800 gas turbines is a breakthrough success for us in the fast developing Chinese decentralised energy market,” said Yao Zhen Guo, country division lead for power and gas and wind power and renewables in China. Development of decentralised generation has been identified as a priority for China.

Worldwide some 297 gas turbines of the SGT-800 type have been sold and the fleet has accumulated about 4 million operating hours, Siemens reports, noting that the efficiency and steam-raising capability of the SGT-800 make it particularly suitable for cogeneration and combined cycle applications.

Another recent notable order for the SGT- 800 gas turbine was a batch of 14 for combined cycle applications in Bolivia. These turbines, together with eleven SST- 400 steam turbines plus condensers, 22 steam generators and SPPA-T3000 control systems, will be deployed to boost the generating capacity of three existing power plants owned and operated by Ende Andina: Termoelectrica del Sur; Termoelectrica de Warnes; Termoelectrica Entre Rios.

The projects together will in fact add more than one GW of additional capacity.

TSK of Spain will be responsible for civil works, balance of plant, delivery of high- voltage substations as well as for mechanical erection and electrics.

Termoelectrica del Sur in the south of Bolivia near the border with Argentina will be equipped with four of the SGT-800 gas turbines, four steam turbines and eight steam generators, as will Termoelectrica de Warnes in Bolivia’s Santa Cruz region. Termoelectrica Entre Rios in Cochabamba, 220 km southeast of La Paz, will be equipped with six of the SGT-800 gas turbines, plus three SST-400 steam turbines and six steam generators.

Siemens has also recently won its first order from Israel for the SGT-800, for use in two 70 MWe combined cycle plants to be delivered on a turnkey basis.

The Israeli energy provider, RD Energy, is the customer for both power plants, with commissioning scheduled for mid-2018.

Siemens will handle the turnkey construction of both plants and will supply one SGT-800 industrial gas turbine, one SST- 300 industrial steam turbine as well as the SPPA-T3000 control system for each project.

The turbines will be manufactured in Finspong, Sweden and Brno, Czech Republic.