Sequential combustion in a can: introducing Ansaldo’s new GT36

To meet European Commission conditions allowing GE’s purchase last year of Alstom’s power businesses, Ansaldo Energia acquired Alstom’s heavy duty gas turbine technology, the GT26, and the new, and very large, GT36, which was under development. Ansaldo Energia is now making public for the first time information about some of the key design elements of the GT36. 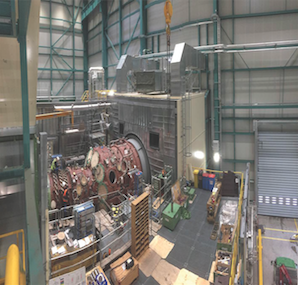 A distinguishing feature of GT26 gas turbine technology is sequential combustion, which has been described as the reheat concept applied to gas turbine combustors, and which provides a number of benefits, including flexibility in operation, excellent turn-down performance, low NOx and high part-load efficiency. Sequential combustion enlarges the emission-compliant operation window compared to other combustor technologies and “consequently the options for the power plant operator – thus offering a clear advantage in today’s and future power generation markets”, says Ansaldo Energia.

In the new GT36 gas turbine, the first of which has been operating at Birr since May 2016, the sequential combustion concept is retained but it is implemented within can combustors rather than the two annular combustors (called the EV and the SEV combustor) used in the GT26. The 60 Hz version of the GT36 uses 12 cans, while the 50 Hz version employs 16 cans.

In the GT26 there is a single-stage HP turbine between the EV and SEV combustor, while downstream of the SEV combustor are four low pressure (LP) turbine stages. Air discharged from the 22-stage compressor is guided along the combustor inner and outer liners to the EV burners, where it is mixed with the high pressure air and ignited, producing the hot gas to drive the HP turbine. The gas is reheated in the SEV combustor, into which fuel is injected and ignites spontaneously, and undergoes its final expansion through the four stages of the LP turbine.

In the GT36, the HP stage is eliminated and the number of compressor stages reduced, from 22 to 15.

The four-stage power turbine is retained, and uses similar materials to those used in the LP stage of the GT26. The turbine inlet temperature is increased for improved efficiency, with front loaded aerodynamic design to maintain rear stage temperature levels similar to those of the GT26. A double layer TBC (thermal barrier coating) is employed on the front stages to compensate for the increased inlet temperature, while blade 1 uses a 3D core design to improve cooling air effectiveness.

Main features of the GT36 can combustor, which has been under test at DLR (German Aerospace Center) for the past three years, are shown in the illustration on p16.

What is called the First Burner (or Premix Combustor) employs FlameSheetTM combustor technology, which was developed by third-party after-market specialist PSM (Power Systems Mfg), previously owned by Alstom and also acquired by Ansaldo Energia as a consequence of the GE/Alstom deal.

The Sequential Burner (aka Sequential Combustor) is an evolution of the SEV burner and fuel injector, with a larger number of vortex generators and fuel nozzles (providing multi point injection) for improved mixing.

The Sequential Burner liner combines some of the best performing features of PSM’s transition piece portfolio.

In the design of the GT36, particular attention has been paid to simplification where possible, improved constructability and increased maintainability, with emphasis on increased inspection intervals and reduced planned outage durations.

Ansaldo Energia will be hoping that commercialisation of the GT36 goes more smoothly than that of the “B rating” version of the GT24/GT26 in the late 1990s, which was plagued with a number of “introductory issues” that proved very expensive to correct and nearly fatal for Alstom.

Learning from these lessons, and challenges faced by other vendors in introducing new gas turbine technologies, considerable emphasis has been placed on comprehensive testing of the new engine in realistic operating conditions, with full engine validation at the Birr power plant in Switzerland (also acquired by Ansaldo with its purchase of Alstom’s heavy duty gas turbine portfolio).

Ansaldo says the “GT36 is fully insurable based on detailed assessment from insurers and technology institutes”.