Sealing the deal for Kaplan turbines 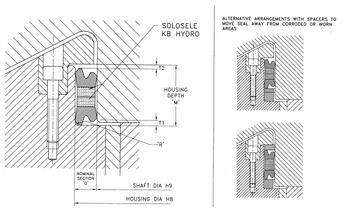 SOLOSELE KB Hydro is a newly introduced lip seal from James Walker & Company that has been developed and field-tested over the past ten years on the blade roots of Kaplan turbines. It is designed for effective long term sealing when installed as a fully moulded endless seal by the turbine manufacturer, but it is much more likely to be supplied in split-form for on-site joining (OSJ) by maintenance personnel. The OSJ version proposes to save days of unnecessary turbine downtime and labour as the seal is efficiently joined around the blade root without removing the blade.

In essence, Solosele KB Hydro is a robust unit seal with a profiled lip section of medium nitrile NBR elastomer. It is reinforced at the base with an integral anti-extrusion element of rubber-proofed fabric that is securely mould-bonded to the lip section. Medium nitrile NBR is an effective material for blade root sealing applications, as it has excellent resistance to water and most lubricating oils, and is suitable for the operational temperature ranges encountered by Kaplan turbines.

The anti-extrusion element is sufficiently tough to stop the seal from stretching and bunching as the shaft rotates, but it is also designed to be flexible for ease of manipulation during the fitting procedure. The fact that the Solosele KB Hydro is deeper than it is wide also aids with installation, as this sectional profile makes it almost impossible to twist the seal accidentally when fitting in a blind housing — a problem that can hamper the fitting of the innermost elements of some traditional multi-lip V-type seal sets.

Prototype and pre-production models of Solosele KB Hydro have operated for many years on turbine blades at hydroelectric schemes in Finland, Sweden, the Balkans and the UK — in both OEM fit and as retrofit on older equipment. Field trials show that the product operates particularly well fon worn equipment where the blade root rotates out-of-true or runs on worn bearings.

The obvious duty of a Solosele KB Hydro seal is to keep lubricant within the blade root system whilst simultaneously preventing the ingress of water and abrasive particles. To achieve this most effectively, two of the seals are installed back-to-back in the blade root housing. This back-to-back arrangement has additional environmental advantages: as both seals will work in the reverse direction, there is virtually no chance of lubricating oil leaking through to pollute the river flow, which would cause the plant to be closed for expensive unscheduled maintenance.

When the seal is installed in its housing, the radial squeeze on its elastomeric body provides low pressure sealing that is suitable for stationary and turbine start-up conditions. As the system pressure rises with turbine rotation, the seal responds accordingly to maintain a constant sealing force under fluctuating and reversing pressure differentials. The seal’s response to all pressure conditions was analysed and fine-tuned using non-linear FEA (finite element analysis) techniques during its design stage.

The ability to handle the fluctuating and reversing pressures is a feature of the seal’s origins. Solosele KB Hydro is based on the design of James Walker’s Solosele G hydraulic seal that works at up to 420bar and a maximum surface speed of 0.5m/s on reciprocating duties. With its flexible chamfered lips, Solosele G has also proved efficient at sealing high pressure swivel-arm systems in slow oscillating mode where eccentric movement is involved. It was therefore the obvious starting point for the development of a Kaplan turbine blade root seal.

Typical blade root seals rarely experience pressure differentials above 10bar, hence the design work to produce Solosele KB Hydro from the 420bar Solosele G gave a great deal of latitude. The main development concerned finding the optimum shaft interference to give positive sealing action when the turbine is stationary, or rotating under either positive or negative pressure.

By far the most challenging aspect of Solosele KB Hydro’s development has been the adjustment of the OSJ version for simple on-site joining. Other methods used to install split-type seals and reduce maintenance time all have their downsides.

For example, the simple non-bonded joint of abutted ends can only be used if a small degree of leakage is acceptable – and this is not the case when lubricant can escape into the river flow. Thus, on-site vulcanising has for many years been the only answer – but this process is expensive and needs a high degree of skill and cumbersome equipment at the site. Alternatively, a split type multi-lip seal could be used, but this needs significant fitting experience to obtain effective leak-free results.

James Walker therefore focussed development on an on-site joining technique that could be performed by a maintenance fitter in a few hours, using the parts and tools supplied in the OSJ Solosele KB Hydro boxed kit.

Although the company already has a patented OSJ system for its Walkersele rotary lip seals, this proved too difficult to use within the very confined space of blade root housings. As a result, a totally new technique was created, based on a bonded Z-shape joint and simple jig/band system to hold the parts together accurately while the bond is made.

Extensive testing of the OSJ technique has led to the development of two methods for holding the ends of the seals during the joining process. The method best suited to a specific application depends on the seal radial section size.

The OSJ sequence is simple. In highly abbreviated form, the fitter:

• Will place seal over shaft.

• Slide joining jig/s on to seal.

Ultimately, the long term success and sealing integrity of an OSJ Solosele KB Hydro relies on careful adherence to all stages of the joining process. This is described fully in the step-by-step instructions supplied with each seal kit. However, James Walker recommends that first time users attend one of its hands-on training sessions. These are carried out on-site or at any of James Walker’s premises worldwide.

A further installation benefit of Solosele KB Hydro derives from the fact that it needs only radial compression to form an initial seal — axial compression is not required. Therefore, housing length tolerances can be relaxed to simplify further the fitting procedure. This could prove particularly beneficial to original equipment manufacturers when installing endless-type seals during plant assembly.

For maintenance fitting, the lack of need for axial compression readily enables the pair of compact seals to be sited at different positions within the existing housing. By using spacers, the lips of the seals can be moved away from corroded or worn areas of the shaft on to clean and undamaged oscillating surfaces, resulting in higher sealing integrity, reduced seal wear and extended life.

Solosele KB Hydro is readily available in a range of radial sections and diameters to suit Kaplan blade root housings. – see Table 1. Seals within these ratios are supplied without mould charges, although other section-to-diameter ratios can be accommodated by consultation with James Walker.

Experience shows that the integrity of a properly installed OSJ seal readily matches that of the endless version for all normal turbine duties. With Solosele KB Hydro, James Walker brings to Kaplan turbine manufacturers and operators a sealing solution that has tested positively. In OSJ form, it can give the performance of a fully moulded endless-type seal combined with the installation convenience of a split-type seal.