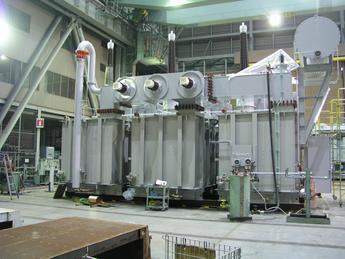 In December 2003, Toshiba, as technical leader of a consortium with Sojitz Corporation, received an order from Electricity of Vietnam (EVN) to deliver electromechanical equipment for the Dai Ninh hydro power project (2 x 150MW), a contract with a value of approximately 5B yen (US$42.5M). Capital funding for 85% of the project was provided by official development assistance (ODA) loans from the Japan Bank for International Cooperation (JBIC), with the remainder from Vietnam.

Vietnam has enjoyed steady economic growth in recent years, and the Vietnamese government plans to sustain this by increasing the country’s installed generating capacity by 10,000MW before 2010. On completion, the Dai Ninh project will contribute to this target.

The principal features of the scheme are two earth/rock fill dams, four saddle dams, a gated spillway, emergency spillway, connecting canal, intake, 11km long tunnel, penstock, tailrace, switchyard and transmission lines and a 300MW power house. It is a multipurpose project with two primary objectives: to provide electricity to Vietnam’s southern provinces and to divert water from the Dong Nai river catchment area to the coastal area, for irrigation of approximately 40,000ha of agricultural land in Binh Thuan and Ninh Thuan provinces. Toshiba’s contribution of electromechanical equipment for 300MW of generating capacity will help to secure the first objective.

The turbine design is rare, and reflects the unique characteristics of the site – a high rated head of 627m, and the huge water flow volume.

Special three-phase transformers, which break which down into individual modules for each phase allowing on-site assembly, are required because of space limitations in the project area and restrictions on transportation; the site of the power house is a long way from the coast, and large containers cannot be transported to the site. Dai Ninh’s mountainous location also imposes severe size and weight limits during transportation. The largest unit of a normal three-phase transformer for a 150MW hydro power plant weighs at least 100 tons. Each phase of the transformers for Dai Ninh weighs in at approximately 45 tons.

The scope of supply of electromechanical equipment to the Dai Ninh project is as follows:

The Sojitz Corporation, Toshiba Corporation consortium has just started to supply the electromechanical equipment for Dai Ninh. The overhead crane is now installed, and switchyard work is underway. Installation work of the equipment is moving into full swing, and the power station is scheduled to start commercial operation in December 2007.

For further information on the equipment supplid, please visit www.toshiba.co.jp