RWE hopes to be able to announce the preferred gasification technology provider and gas turbine supplier for its Goldenberg IGCC+CCS project this autumn. 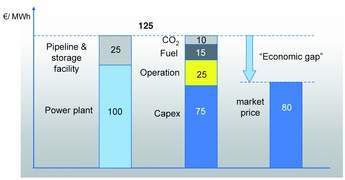 February saw the commissioning of a key project at RWE’s Niederaussem Coal Innovation Centre: the 210 t/h (raw coal input, 110 t/h processed coal output) WTA demonstration facility employing the fine-grain (with vapour condensation) version of RWE’s proprietary WTA lignite pre-drying technology. The WTA technology (WTA being a German abbreviation for fluidised-bed drying with internal waste heat utilisation), which has been under development for many years, is based on the principle of a steam-fluidised bed. The energy required for drying is supplied via heat exchangers that are integrated in the fluidised-bed drier and heated with steam. Drying takes place in quasi 100% pure steam, which is slightly superheated.

The key benefit of WTA (a licence for which has been sold to Australia for application at Hazelwood, see MPS, December 2007) is that low temperatures (110°C in the case of Rhenish lignite and 107°C in the case of Australian brown coal) can be used to reduce the moisture content of the lignite from typically 55% for run of mine Rhenish material to about 12%. This compares with the use of 1000°C flue gas in previous lignite mill drying processes. In WTA the heat used for drying is largely recovered. The result is much higher efficiencies, about 10% higher than the current state of the art.

RWE sees WTA as an essential enabling technology for future dried lignite fired conventional power plants as well as its lignite-fuelled IGCC project, which it has been planning since about mid 2006.

RWE’s intended location for the IGCC is the Goldenberg site, near Huerth, south east of Cologne, where power has been generated from lignite since about 1914 and which is connected with RWE’s large opencast lignite mines via rail.

The Goldenberg heat and power complex includes two lignite fuelled CFB boilers (installed in the early 90s) and, significantly, also hosted an industrial scale demonstration facility for RWE’s HTW (High Temperature Winkler) fluidised bed based process for lignite gasification (which, like WTA, was developed by Rheinbraun, part of RWE). This demo plant operated from 1986 to 1997, employing lignite to produce synthesis gas for methanol.

Indeed, Goldenberg was going to be the site of RWE’s previous excursion into lignite-fuelled IGCC, the 367 MWe KoBra project (which featured, with a wallchart, in the February 1993 edition of MPS). KoBra was to have consisted of an earlier (coarse-grained) version of WTA combined with oxygen blown HTW. But the plan was abandoned when, in the aftermath of reunification, the high efficiencies achievable with lignite fuelled supercritical plants employing pulverised fuel became apparent from what had been going on in the former GDR, and RWE’s attention turned to pursuing this technology (culminating in the BoA1 and BOA2/3 projects at Niederaussem and Neurath, respectively).

However, with the rise of carbon capture to the top of the power agenda in recent years, IGCC, which offers some important inherent advantages when it comes to CCS, has once again emerged as a potentially attractive option for lignite new-build power plants, RWE believes – with the added potential benefit of polygeneration.

Instead of HTW, which is restricted to lignite, RWE is this time going for an entrained flow type of gasifier because it is applicable to both hard coal and lignite. The company is hoping to be in a position to publicly announce its preferred gasification technology supplier, as well its gas turbine vendor, this autumn when it is also planning to place the engineering contracts.

The proposed IGCC+CCS demonstration project will use a 300 MW F class gas turbine, while the gasifier will be of the quench type, with a thermal capacity of about 1000 MW and an operating pressure of 40 bar. The CO/H2-rich raw syngas is water quenched to about 200°C, with the resulting steam used in a subsequent shift stage to convert the CO into more hydrogen and carbon dioxide.

The hydrogen-rich gas left over after the H2S/CO2 separation process will be conditioned with N2 from the air separation unit and if necessary with steam to meet statutary NOx levels when employed in the gas turbine of the combined cycle plant.

The gross efficiency of the overall plant is estimated at 48.5% (LHV). Taking into account auxiliary electric power requirements, including CO2 compression, the plant has a net capacity of 320 MWe and a net efficiency of 34% (LHV). The carbon capture rate is calculated to be 92%.

Pipeline has been determined as the best means to transport the CO2. However, due to the fact that the nearest feasible storage options are located in the northernmost states of Germany, one of the key challenges of the project is the length of this pipeline – about 530 km, crossing states, NRW, Niedersachsen and Schleswig-Holstein. Nevertheless the plan is to do without a booster station. The inlet pressure will be about 200 bar – decreasing to 100 bar at the storage location. The diameter of the pipeline will be determined by the pressure regime and carbon dioxide flow rate. A diameter of 16in would enable about 2.6 million t of CO2 to be transported per year. meeting the needs of just the IGCC. A bigger pipeline diameter would be possible if other companies are interested in using it for transporting CO2 from their plants.

As the diagrams above show, the estimated capex for the Goldenberg IGCC plant is around 2.2 billion euro, while generating costs are put at around 125 euro/MWh – reflecting the demonstration nature of the project, including its relatively small scale.

While there are many uncertainties, including, of course carbon prices, RWE estimates that for future large scale IGCC+CCS plants the generating costs will fall to about 80 euro/MWh and the technology will be economically viable, certainly compared with PF plants equipped with CCS – thus justifying development of the technology. But the company points out that the high costs and risks of such a CCS demo plant must be addressed and is seeking financial support through co-operation with industrial partners and via government and EU research funding. In particular the project would hope to benefit from recent EU initiatives aimed at funding CCS demonstration through revenues created via the ETS and the European Economic Plan for Recovery, where the project is listed.