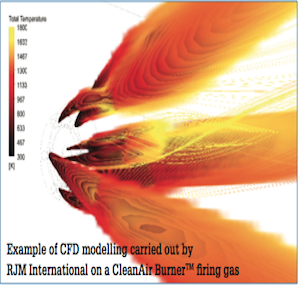 The upgrade consists of the installation of RJM International’s ultra-low-NOx CleanAir BurnerTM technology, which enables IED limits to be met with primary measures only (ie with just burner modifications and no further downstream flue gas cleaning required).

The Kralupy plant is located 31 km north- west of Prague and is the power source for a facility that manufactures rubber and polystyrene products owned by chemical company Synthos.

The burner upgrade, on Boiler K4, was started in November 2016 and is scheduled to last for nine months, with commissioning and full operation planned for August/September 2017. The work will be carried out by local sub- contractors, working in partnership with RJM’s specialist engineers.

Clearing the air in Beijing

Another recent project employing RJM International’s CleanAir Burners was a retrofit on a set of gas-fired boilers at a China Huadian district heating plant in a suburb of Beijing.

This was RJM International’s first major project in China and is delivering NOx levels below 30 mg/Nm3, enabling the plant to meeting the emissions requirements of the country’s new clean air legislation.

RJM installed nine of its CleanAir Burners to three 116 MWt hot water boilers that form part of a district heating scheme in the Fengtai district of Beijing.

Under the new Clean Air Act of Greater China, due to come into force in April 2017, gas- fired plants of this type are required to achieve NOx levels below 30mg/Nm3.

The project marked, says RJM International, the first successful ultra-low-NOx conversion on a boiler of this size.

The three boilers that were backfitted are generally used as a back-up resource at the Fengtai district heating plant during the cold winter months when demand for hot water and heating is at its greatest.

RJM was contracted by HKL Global, an international manufacturer’s representative focusing on the China energy market, to design and supply an ultra-low-NOx retrofit solution.

Following a detailed site survey carried out in March 2016 by RJM engineers, the company then applied its CFD (computational fluid dynamics) modelling capabilities to ensure the low NOx threshold could be met, working on the principle that diverting around 20% of the flue gases back through the burner would lower peak flame temperatures and thus reduce the formation of NOx.

The project was completed during 2016 using a local workforce, supported by RJM and HKL Global engineers, with testing and final guarantees confirmed in December 2016.

The RJM CleanAir Burners were manufactured in the UK, whilst the revised ducting for the flue gas recirculation system was manufactured locally in China, with a new fan sized by RJM and sourced by HKL Global.

“Working with HKL Global has been a very successful partnership, bringing together their local knowledge and skilled contractors with our CFD analysis and hardware solutions,” said John Goldring, managing director of RJM International.

“The market potential in China for retrofitting other boilers with this ultra-low-NOx solution is considerable and we look forward to developing further our partnership with HKL Global in 2017,” he added.

“This project was under very tight schedule and limited budget. Therefore, RJM provided a custom solution that expedited the installation process. During a very short commissioning time, the burners were tuned to meet all of the customer’s emission requirement as evidenced by a CEMS (continuous emissions monitoring system).