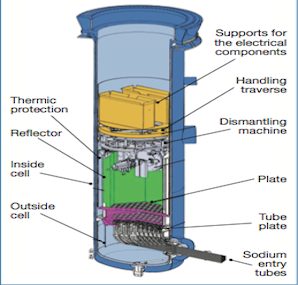 Speaking at the end of June 2016 at the World Nuclear Exhibition (WNE), in Paris, manufacturer Protem discussed the challenges of teleremote dismantling work it had previously performed as part of the wider decommissioning activities underway for some years at the KNK II sodium-cooled fast breeder plant, in Karlsruhe, Germany.

The decommissioning at KNK II was a first for a sodium-cooled reactor. Protem employed a multi-purpose single piece of equipment for its exacting task among the many executed by numerous companies.

The France-based manufacturer told NEI that its discussions at WNE were to bring a focus once more to the challenging technical tasks involved in such decommissioning work, especially as there are many more sodium- cooled reactors either still operating or in shutdown for dismantling over future decades, pending plans and funding.

While these projects arise infrequently they have great importance, and Protem further commented on two aspects of the challenges planners and engineers face – choosing effective technology while not reinventing the wheel; and, estimating costs to execute such works, given that overall KNK II decommissioning costs have been higher than expected due to a number of factors.

The experimental rector site is located in the extensive Karlsruhe nuclear complex in the south west of Germany. In the complex, the compact sodium-cooled reactor KNK II was run as a prototype fast breeder reactor with a capacity of 20MW-electric, gross (17MW- electric, net) for 14 years until August 1991.

The KNK II plant saw early dismantling operations begin in 1993, and by the middle of the following year all fuel had been removed from the facility. Numerous early, preparatory, decommissioning tasks were performed but it was not until 2003 that work began on dismantling the reactor containment building.

Key tasks in the work at the reactor containment building included dismantling the reactor tank and internals as well as removal of thermal insulation, primary shielding and a biological shield. A number of companies helped on the various vital tasks, including Protem and Siempelkamp Nukleartechnik, for example.

Responsibility for the decommissioning of KNK II is with Wiederaufarbeitungsanlage Karlsruhe (WAK) Ruckbau- und Entsorgungs GmbH, which is a subsidiary of nationally-owned Energiewerke Nord GmbH (EWN). Yet the work at KNK II and return of the site back to green-field status is but one of many decommissioning projects that have been underway at the huge Karlsruhe complex. WAK’s briefing document on the site includes: the reprocessing plant, incorporating the vitrification facility; the multipurpose research reactor; FR2 research reactor; hot cells; and smaller research facilities. The decommissioning and dismantling activities over the years have involved various remote control and handling technologies.

The various works at the site are funded by the national and state governments.

The high activation during operations of KNK II penetrated into the building structures in high dose rates, and necessitated the dismantling work and disposal of materials to be undertaken by remote operations.

Protem says that at commencement of its work on the KNK II plan had been to use 11 pieces of equipment to cover all cutting needs. But in re-evaluating the possibilities around the dismantling scenario, and with particular focus on cutting the internal components and the volume of waste to be produced, Protem envisaged the potential to use a single dismantling system.

It designed and built a teleremote dismantling system in the form of a single large piece of equipment to cut out the reactor vessel and internals, and do so under strict operating constraints – including limits on temperature, air conditions and ensuring no humidity due to the residual presence of sodium.

Given the operational restrictions, the technical approach taken, therefore, was mechanical cold and dry cutting.

Protem fitted the cylindrical dismantling device (F9-2000) with an array of cutting tools on the underside, allowing the reactor vessel and internals to be cut into calibrated pieces for disposal in special containers.

Specialising in design and manufacture of machining equipment for onsite operations, and active in the nuclear sector, the company selected the main cutting techniques to be: milling with high speed steel tool bits; sawing with a circular metal saw blade; and shearing with hydraulic shears.

Equipment on the F9-2000 dismantling machine also included visual inspection capability via a four-camera remote video system. Further parts of the dismantling machine included nine different modules to hold cut waste, and a control window in one part to visually control the level of chips collected.

Preparing the work site, Protem set up a partial mock-up of the reactor vessel and internal components which helped it with: validation of operating procedures; finalising the degraded modes; ensuring reliable handling; and optimising the cutting and waste processing.

Due to the residual sodium contamination within the reactor vessel, and also the activation of the steel, dismantling was performed under a nitrogen atmosphere.

Onsite, an airtight cell with a nitrogen atmosphere was positioned over the head of the reactor vessel to avoid sodium ignition during the dismantling work below.

Protem’s single unit dismantling system was designed within the allowable weight parameters of the core building to enter the 1.868m diameter reactor vessel from above. The multi-purpose unit was suspended by cross-beam crane and lowered into the 10.5m deep void.

On being lowered, the lower sides of the cylindrical body of the dismantling machine held a rotary cam and eight clamping jaws which were used to lock the machine in place, as desired, under teleoperational control. The remote control station was located outside the equipment assembly and crane support zone above the vessel.

Held in position at each desired elevation and position, the tools were teleoperated for the cutting tasks. Vessel and internal wall thickness ranged from 6mm-16mm.

It added that the largest pieces were up to 170mm from the reflector and down to 6mm from the vessel’s protection liner. In total, approximately 2.7m3 of cutting chips were produced, equating to about three tonnes.

The waste handling system had 500mm diameter collection drums, each 700mm high, and these were packaged into 200l drums, said Protem. It added that this arrangement made waste compaction possible and reduced the number of drums required by more than five percent.

Prior to the work, the quantity of residual sodium had been anticipated to be approximately 30l close to or on the cutting areas, and official estimates anticipated there could perhaps be a few percent more, said Protem. During the dismantling operations, though, the amount observed was greater by more than a few percent, it added.

With such work as yet uncommon, and many more sodium-cooled reactors requiring dismantling in future, Protem also provided the official costs for the full project of decommissioning the entire KNK II facility. It noted that the estimated initial budget for all dismantling work at KNK II had been €100 million at the outset, but by the end of 2013 (and most recent assessed official data) the actual cost was almost €320 million.

Talking to NEI, Protem noted that challenges for such projects can include issues such as not all as-built construction data being available, or having been recorded at the time a facility was built, and therefore estimates have to be made. Other challenges can include changes in structure and integrity of some parts of the reactor vessel and internals due to the high degree of ionisation radiation during the operational life. This can lead to more difficulties in dismantling some parts as was the case at KNK II where some elements expected to be easily to remove proved more difficult.

Protem adds that the general demands and requirements for documentation control for decommissioning and dismantling projects are greater than in the times when the facilities were constructed.

It is expected that a further approximately €364 million will have been required to complete the decommissioning project by the anticipated finish time of around 2020, returning of the site to green-field status, WNE delegates were told.

The total decommissioning cost, therefore, is much larger than the original construction cost.

In describing its work at KNK II to WNE, and while noting the tasks were completed eight years ago, Protem says the plant had similar technology to other sodium-cooled reactors. It maintains, therefore, that with many more sodium-cooled reactors requiring dismantling in the future – such as Rapsodie plant, in France – the tasks involved and experience gained at KNK II offer much for the wider nuclear industry to consider.

In particular, areas to consider are: choosing technological approaches for best approaches for optimum performance and handling risk management in various dismantling activities; and sufficient and accurate data as a basis for robust cost estimating, not least where financial resources may be limited for these crucial end-of-life investments, and may affect the commencement and scheduling of the programme of works.