Reborn in the USA? 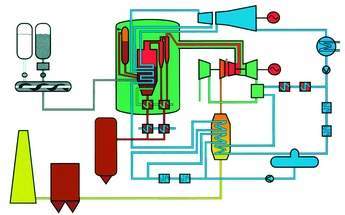 In July 2001, with little fanfare around the globe, the world’s largest PFBC based coal fired power plant – the 360 MWe P800 – went into commercial operation at Kyushu Electric Power’s Karita station. This supercritical plant has a cycle efficiency of 42.3%, net, HHV, making it one of the world’s most efficient power plants.

This was the sixth PFBC plant built employing ABB Carbon’s (now Alstom’s) technology and the total operating experience of this fleet exceeds 200 000 hours. These plants are reliable, represent state-of-the art low emissions and high efficiency, and are fuel flexible.

The fuels used include trade coal, lignite and brown coal. Fuels ranging from oil shale to petroleum coke were shown to be acceptable in tests at the PTF (Process Test Facility) in Sweden (which is currently being re-established in the USA).

The first PFBC plant achieved commercial qualification status in 1995 when natural gas was very inexpensive and deregulation was born. PFBC was competitive against low gas pricing when using fuels such as waste coal and petroleum coke.

About 25% of raw coal mined ends up as waste and long wall mine waste has a higher percentage of fines. During the period 1995 to 2000, one project to be evaluated was a waste coal project for Consol Energy, to be located at one of its long wall mine sites.

Consol Energy’s most recently installed coal preparation plant had been provided by Farnham & Pfile Construction, which brought Doug Farnham, Farnham & Pfile’s president, into contact with me, then ABB Carbon’s VP, international business development, and some interesting seeds were planted.

Corporate issues and a change in ownership stalled PFBC development for a time. During this period, more coal preparation plants were built by Doug’s company, natural gas prices started climbing, the PFBC fleet experience was increasing and its reliability was proven. I “retired” and returned to school to become certified as a sail and power boat marine engineer and architect.

Then a coal fines impoundment in West Virginia failed and flooded a town. Pennsylvania elected a new governor who brought in a new Secretary of the Department of Environmental Protection with a strong reputation. The stage was set.

In response to a challenge issued by Pennsylvania’s Governor Rendell, Doug and myself formed the company PFBC Environmental Energy Technology, Inc (PFBC-EET), a technology transfer agreement was signed with Alstom, a supply agreement for the PFBC gas turbines was signed with Siemens and the State of Pennsylvania established PFBC waste coal plants as a Green Energy source by passing PA Act 213 of 2004.

The first order of business for PFBC-EET is to establish the Process Test Facility, located at the Consol Energy R&D Center in South Park, PA. The State of Pennsylvania and the US DOE are supporting this effort with grants and technical advice.

The alliance will then reform to build turnkey power plants, initially for wet waste coal, proceeding to projects re-powering older coal, gas and oil fired plants to bring them into environmental compliance and make them competitive in today’s market. PFBC-EET’s business territories include Canada, the USA, Mexico and Poland.

With the deep, low velocity fluidised bed, lower heating value wet fuels with high fines content can be fired at a high carbon conversion (oxidation efficiency) with low carbon monoxide emissions. The added mass flow from fuel moisture will increase the combined cycle energy and net plant efficiency, compensating for the loss to the latent heat of vaporization.

There are 52 long wall mines in the USA. This is a niche market for PFBC and an opportunity for the coal mine owners to eliminate impoundments, achieve near 100% carbon utilisation and convert mine waste into an income ranging from $16 to nearly $40/US ton. A right of first refusal for the first wet waste coal plant was recently signed with Consol Energy.

The high pressure within the PFBC cycle results in a higher partial pressure of the carbon dioxide in the hot gas stream, increasing the effectiveness of CO2 capture and management. The higher cycle efficiency also reduces the amount of CO2 required to be removed per unit output.

PFBC provides the only practical option for repowering. A repowered plant employing PFBC technology will enjoy about a 20% increase in net plant output, net plant efficiency will increase (and CO2 decrease), fuel costs will reduce because of the high efficiency and higher fuel flexibility. The reduced marginal cost (fuel and variable O&M) will earn a higher capacity factor and annual revenue.

The development of PFBC has had its expected share of growing pains since the initial start-ups about 15 years ago. The efforts of ABB Carbon, their licensees and customers like AEP, Fortum, Kyushu Electric, together with government support in Sweden, Japan and the USA, have resulted in a steady maturation. Today’s availability records stand in testimony of this co-operative effort. A Uniram expert working with early start-up records performed a regression analysis and predicted that PFBC would reach an availability level of 87% in 5 to 7 years from the initial start-up. He was right.

PFBC-EET is betting that its proven technology is the responsible clean coal option until and beyond the time that the promises of Futuregen are realised.

We are hedging our bet by careful PTF pretesting of candidate fuels, staying in the footsteps of a proven, reliable, clean coal design, focusing upon streamlined construction by employing the IBM Catia system and teaming with experienced alliance partners.