RCC in the US 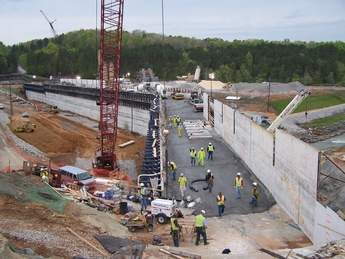 TVA’s Bear Creek dam is a high hazard embankment dam in northwest Alabama that provides water supply, flood control and recreation benefits. Since its initial filling, the dam has experienced significant seepage through its karst limestone foundation. Paul C Rizzo Associates was hired to design a robust, permanent solution for the Bear Creek dam’s issues. Rehabilitation consisted of the construction of a downstream RCC reinforcement structure to prevent loss of the dam during PMF overtopping, and installation of a composite seepage barrier consisting of a two line grout curtain with cutoff wall panels at select locations.

The site consists of Mississippian Age (320-355 Ma) rocks of the Bangor Formation. The various rock characteristics within the Bangor formation have proven significant to rehabilitation of the foundation. A complex combination of lithologic variations and geologic structure produced a setting in which zones requiring significant treatment varied laterally and vertically.

Treatment of the foundation under the varying and challenging conditions emphasised a progressive design and construction of the final composite seepage barrier, wherein continuous, ‘real time’ evaluation of the geologic conditions encountered during each phase of the foundation treatment process were employed to adjust the scope and design of the next step of the rehabilitation.

The end result is an RCC foundation and composite seepage barrier that employed excavation, cleaning, and backfill of near surface karst features; installation of a double line grout curtain; and installation of discreet zones of concrete cutoff walls where geologic conditions rendered grouting ineffective.

The project reached substantial completion in June 2009 with the completion of the 60,400m3 RCC berm.

Extraordinary problems demand out-of-the-ordinary solutions. When South Carolina Electric & Gas Company officials discovered that the Saluda hydroelectric project dam could liquefy during a repeat of the 1886 Charleston earthquake, they knew they were facing an extraordinary problem. They needed expertise to figure out how to keep a 202Mm3 reservoir rimmed with businesses and homes nearly full, and keep a hydroelectric plant and coal-fired steam plant operational while also ensuring the safety of the 120,000 residents living in the floodplain.

The safety of both the downstream community and those working on the project, as well as the sheer enormity of the undertaking, drove the innovative design decisions made and implemented by engineer Paul C Rizzo Associates and contractor Barnard Construction Company.

Their work included patenting a method of expeditiously placing filter zones, designing a cooling method to enable concrete production during extremely high temperatures, and beefing up operations (in all, involving 600 people) to enable them to set a North American record in roller-compacted concrete placement in a 24-hour period – 14,213m3. Teamwork among the owner, engineer, and contractor proved pivotal in timing, problem-solving, and maintaining good relations with the surrounding communities.

The Taum Sauk upper reservoir is a pumped storage facility owned and operated by AmerenUE located on Proffit Mountain approximately 193km southeast of St. Louis in Reynolds County, Missouri. The original pumped storage reservoir was completed in 1963 as a dumped rockfill dam. The reservoir was impounded by a kidney-shaped rim dike 2000m round, a maximum section approximately 28m in height with a 3m high concrete parapet wall. The reservoir also had a reinforced concrete liner and a geomembrane liner to reduce seepage through the rockfill. The reservoir bottom had an asphaltic liner which tied into the concrete face on the inside slope of the rockfill dike. The original structure was designed without a spillway, and the only incoming flow was by pumping and direct rainfall.

On 14 December 2005, the northwest corner of the Taum Sauk upper reservoir dike failed, resulting in a release of approximately 5.3Bl of water down the mountainside to the lower reaches of the valley, causing extensive damage to the landscape and surrounding camping areas. Fortunately, there were no fatalities from the failure.

Following the breach, AmerenUE retained Paul C Rizzo Associates to perform a forensic investigation to determine the root cause of the breach. Additionally and simultaneously, AmerenUE requested Rizzo to design and implement a safety stabilisation programme to stabilise the remaining portions of the dike and to ensure short-term dam safety with the remaining structure. This work began in April 2006 and was completed in August 2006. The work consisted of slope stabilisation, removal of the geomembrane liner and concrete facing, removal of the parapet wall, and other work required for stabilisation of the existing dike.

Once the stabilisation work was completed, the decision was made to rebuild. Rizzo is also the engineer of record and the construction manager for the project. The Federal Energy Regulatory Commission (FERC) required a symmetrical RCC dam section with 0.6H:1.0V slopes. A sloping face of conventional concrete covers the RCC upstream while the downstream face consists of formed concrete steps. The replacement dam contains an overflow release structure with a capacity greater than the maximum pumping rate to the upper reservoir. The final project will involve the placement of approximately 2.2Mm3 of RCC.

The concrete-faced symmetrical RCC (CFSRCC) dam is similar to the conventional RCC dam except that:

• The cross-section is basically symmetrical like an earth dam.

• The more massive structure has lower stress levels, thus lowering the percentage of cement and pozzolan in the mix than as required for a conventional RCC dam.

There are only a few dams of this type around the world, and none under the jurisdiction of FERC.

The dam is being constructed by Ozark Constructors, LLC, a joint venture between ASI Constructors based in Pueblo West, Colorado and Fred Weber based in St. Louis, Missouri.

Construction of the dam called for innovative ideas from both, the design engineer/construction manager and contractor. One of those ideas was that all aggregate materials were crushed and processed from the original dike rockfill, which required constant monitoring and in some cases required mix design changes on the fly to meet the project design parameters. The utmost efficiency was required from the processing facilities. Four RCC batch plants with a total capacity of 1223m3 per hour are in operation, producing upwards of 11,400m3 of RCC per day. An on-site conventional concrete plant is also in operation.

A close partnership between Ozark, Rizzo, and AmerenUE is a must in this enormous undertaking, with the watchwords on the project being safety, quality, teamwork and production.