Water quality issues can be a challenge for operators of irrigation dams in Australia. Paul Pearce explains how an electronic water treatment system can help to resolve some of these 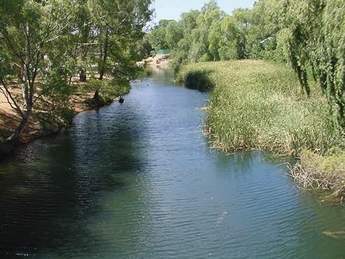 In Europe, a number of structures suffer from corrosion as a result of a combination of mineralised water and high temperatures. To combat this, a particle accelerator was used to address chloride attack on metal surfaces and structures. Corrosion was prevented as a specific resonant frequency was used to disrupt the chloride attack process. This was then repeated for 15 other problem elements commonly found in water, determining the specific resonant frequency for each.

Although this research was done for the purpose of preventing corrosion, it was quickly realised that such treatment could have applications in all sorts of areas where water is involved. In time this led to the formation of Hydrosmart.

The Hydrosmart water treatment system is based on a micro-processor computer. The computer digitally generates specific resonant frequencies and delivers them in complex sequences to antennas, which are wrapped around the water pipe to focus the frequencies into the water flow. Problem groups of compounds dissolved in the water are specifically targeted and the antennas do not have any restrictions on water flow.

While Hydrosmart technology can appear to be similar to magnetic field technologies, it uses a different mode of operation. Hydrosmart’s computer generated resonant frequency approach is able to accurately target specific salts and minerals dissolved in the water. Magnets by their very nature use a static field and as such cannot target specific groups or compounds.

Hydrosmart can be used in a number of horticultural situations, particularly where the water is highly mineralised, a common problem with bore water. The computer generated resonance frequencies produce chemical-free, scale prevention with a de-scaling system that is developed to be effective on all the minerals present in water supplies, including soluble iron.

It does this by changing large, reactive mineral crystals into tiny non-reactive particles, effectively preventing scale from forming. The resonance frequencies remain active in water for several days and progressively break down any existing scale or bio-films. The irrigation system no longer requires maintenance, eliminating the cost of replacing calcium blocked drippers and there is no need for any acid de-scaling which improves soil health as acid kills soil bacteria. Whenever plants are irrigated with mineralised water treated by Hydrosmart, there is often a significant improvement in plant growth and a reduction in growing problems. This is because the treatment breaks down large complex molecules dissolved in the water into bio-available simplex nutrients such as calcium, potassium, magnesium and manganese. These bite-sized particles are easily transported throughout the plant eliminating growing problems such as tip burn and blossom end rot.

The efficient transpiration within the plants causes the sugars to be mobilised at optimum levels and there is an increase in the plant’s resistance to disease and insect damage. The soil will also progressively improve resulting in a significant reduction in chemical usage (ie. less fertiliser and wetting agents).

Iron dissolved in irrigation water could be an essential nutrient to plants but instead it oxidises on contact with the air and blocks drippers, filters and spray nozzles and contributes to scale build up in the pipes. This results in decreased efficiency of equipment, increased maintenance and in many cases, expensive replacement of drippers.

The Hydrosmart treatment has been developed to render the iron non-reactive, preventing it from oxidising so it remains in solution. In the process it also gets broken down into smaller particles making the iron more available to plants as an essential nutrient in the manufacture of chlorophyll.

High salinity problems can also be a problem with irrigation dams and salts collect in the soil through successive irrigations. Salt levels in run-off dams generally increase through the summer as flows cease or reduce, and evaporation concentrates the salt levels in the dam. This increases osmotic pressure and restricts water and nutrient uptake. It also increases the quantity of toxic salt absorbed by the plant. The result is reduced vigor at the low end and eventually plant death at the high end.

Hydrosmart’s resonant frequency treatment can reverse this process. The treated water inactivates much of the salt build up in the soil, reducing the osmotic pressure. It also increases the solubility of the salt, allowing the build up to easily flush through the soil away from the root zone.

When applied in the correct manner, the Hydrosmart system can help resolve these problems. An example of this is Burra Creek in South Australia. The Burra Creek recreation park waterway is actually a dam filled with water from an old copper mine. Prior to having Hydrosmart units installed, the creek was almost constantly covered with algae which formed a carpet across the surface. Burra, being a heritage town and having a rich mining history, has a constant tourism influx which regularly brought unflattering comments on the state of the creek.

Within a short time of the installation the algae was starting to lift from the bottom of the creek bed, rising to the surface. Although this made it look as if the problem wasn’t getting any better, flushing the creek via the sluice gate showed that there was much less algae than there appeared. Approximately two to three months after installation the creek was practically algae free. The units have also prevented any further outbreaks of algae.