The third of four pump-turbine units has just been refurbished successfully at the Blenheim-Gilboa pumped storage plant in the US. Representatives from the New York Power Authority give more details about this complex undertaking 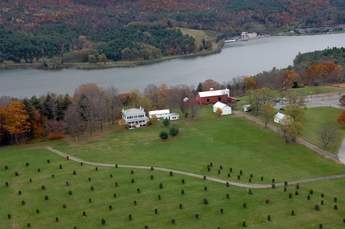 The Blenheim-Gilboa pumped storage project is located in the Catskill Mountains in New York State, US. The 1040MW project is owned and operated by the New York Power Authority (NYPA) and first produced commercial power in 1973. It consists of an underground powerhouse with four Hitachi 260MW pump/turbine units, with one common penstock from the upper reservoir feeding four spherical valves. The gross head range on the units is 324.9-348.4m.

In 2003 NYPA began the process of upgrading and modernising the project’s four reliable but ageing pump-turbine units under a US$135M programme referred to as a life extension and modernisation programme (LEM), with engineering and model testing of a new pump-turbine design. The first phase of construction began in September 2006 with the shutdown of the first unit and replacement of the pump/turbines and many major mechanical and electrical components. At the time of writing this article, the schedule of removing one unit from service each year, while keeping all four units in service during the high demand summer months, has been successfully maintained. The third unit was successfully upgraded and brought on line in May 2009, and the programme is on track for completion in June 2010.

• Refurbish the four pump-turbines, including replacement of the turbine runner with improved efficiency, increased capacity and reduced potential for cavitation of the turbine runner. The turbines will be upgraded so that each generator/motor will operate at up to approximately 318MVA at 0.9 power factor, or 286MW as a generator, and up to approximately 420,000HP, or 318MW at 1.0 pf motoring, at a temperature rise of 80°C.

• Replace starting motor (SM) liquid rheostat (LR) controls and instrumentation with a PLC-based system and switchgear to allow the use of any rheostat to start any of the four units.

• Refurbish the motor/generator including a thorough cleaning, re-insulating the field poles, re-rounding the stator and air cooler replacement.

• Installation of a new condition monitoring system for machine diagnostics.

• Replace the mechanical Woodward governor with a new electronic governor.

The three units successfully completed to date have demonstrated significant improvements in pump and turbine efficiency, greater stable operating range, increased pump flows and increased maximum turbine output. Deliberate efforts have been made to avoid introduction of new sources of vibrations and pulsations, and to limit pump and turbine power increases to allow use of the existing motor-generators.

Blenheim-Gilboa had operated reliably for more than three decades. The extent of runner cavitation erosion was repairable on a rolling three year period; vibrations were moderate, and no cracking had occurred on runners or main generation components. Cavitation erosion occurred on trailing edges, permitting good access for repairs. While the operating range was limited, from about 205-260MW, beyond this vibrations, fluctuation in generator output, noise and draft tube pulsations were excessive.

Extensive mechanical tests of the existing units, conducted by Power Engineering of California, confirmed that the limited operating range was due, as expected, to the presence of cavitating vortices. This was confirmed by analysis of pressure readings in the draft tube and accelerometers on the bearing housing.

NYPA engineers, working with various manufacturers, could not produce an analysis that would guarantee that changing the number of runner blades would not introduce new vibrations. Therefore, to avoid introducing new vibrations from altering the number of blades on the new turbine design, procurement specifications required that the new turbine runner have the same number of blades (seven) as the existing units. Specifications also required an analysis of all ascertainable sources of pulsations by the manufacturer of the upgraded units.

Natural frequencies of the runner were altered slightly from the original design because of the blade shape and flow passage shape changes needed for improved performance. Hitachi was able to evaluate the changes using results from an actual-head model test and ensure that no unacceptable vibrations would be introduced into the project. The submerged runner natural frequency changed from about 84Hz to76Hz as a result of the upgrade.

In order to evaluate the changes in performance of upgraded designs relative to the original design, a model of the existing runner design was constructed by measuring the blade shapes in an existing unit using a FARO digital measurement system. Baseline model test results were then compared to test results on the upgraded designs to produce quantitative comparisons of flow, power and efficiencies and qualitative comparisons of pulsations and potential rough operating zones.

The factory model testing confirmed that turbine efficiency was improved by about 2% while expanding the operating range, based on equivalent pulsations, vibrations and other parameters, from 140-290MW.

Pump efficiency was also improved, by about 5%, and the pump flow rates increased by about 15% without exceeding the rating of the motor-generator. This was of potential significance since the lowest off-peak energy prices for pumping were available in the New York competitive power market for fewer hours than in the 1970s when the project was built.

High-head pump instability evident in the original design was eliminated in the new design. These pump-turbine improvements have resulted in an overall plant cycle efficiency improvement from 66% to 73%.

Changes to the pump turbine included not only replacement of the runner with a longer band design, but included modifications to the wicket gate and stay vane profiles, and the replacement of original simple seals with labyrinth seals.

Once the upgrade of the first unit was complete, NYPA and Power Engineering staff conducted the same tests that were performed on the original unit to quantify vibrations and pulsations to ensure safe operation of the upgraded unit.

To avoid scheduling delays during the construction phase of the unit refurbishment, NYPA purchased one new head cover and one new bottom ring for use in the first unit to be overhauled. The head cover and bottom ring from the first unit were then refurbished and installed in the second overhauled unit. This step was essential in maintaining the project schedule because refurbishment of these two key components could not be accomplished during the planned outage period. It also added the extra challenge of having to install them into a different unit from which they were removed.

The Blenheim-Gilboa LEM project was also tasked with refurbishing the 2.8m diameter spherical valves that isolate the powerhouse from the upper reservoir. Recognising the time involved to complete the refurbishment of a valve, NYPA purchased a new valve for installation in the first rehabilitated unit. The first removed valve was then refurbished over the following year and installed in the next unit.

Results of the inspection on the first removed spherical valve justified the entire programme. From the outside, the only portion visible during normal operation, the valves appeared to be in good condition. However, once disassembled and sandblasted, moderate cracks and other defects were readily found, some visually, others by dye penetrant and ultrasonic methods. The scope of work included 100% ultrasonic examination of the entire valve casting. Cracks were repaired under factory conditions.

Dewatering of the upper reservoir

• Potential collapse of the steel liners of the horizontal penstocks. Extensive computations, field measurements of the water table and a slow drawdown rate were conducted to reduce this risk.

• Pumping over 38,000m3 of water out of the 9m diameter power tunnel and each of the four 4m diameter, 579m long horizontal penstocks which were below the elevation of the lower reservoir.

• Storage of some water in the upper reservoir to protect fish and provide a source of water to refill the vertical shaft before unit was re-started as pumps.

To prepare for dewatering the upper reservoir four times, a temporary cofferdam was constructed during the first dewatering, permitting construction of a permanent cofferdam with removable precast concrete panels and outlet works. The 1.8-3.6m high permanent cofferdam was designed to accommodate a ten-year rainfall event without over topping. In addition, two auto-start diesel-powered dewatering pumps were installed at the intake structure to remove minor leakage and rainfall, and prevent infiltration of water into the vertical shaft. One auto-start diesel-powered emergency pump was also set up to maintain safe water levels in the area behind the permanent cofferdam.

Remote sensors were installed to monitor water levels behind the permanent cofferdam and at the intake structure. This data was transmitted via SCADA to the Blenheim-Gilboa control room and monitored around the clock.

NYPA worked with the Fisheries and Wildlife Department of the State University of New York to rescue fish stranded in isolated pools remaining on the floor of the upper reservoir after the water levels had dropped.

After the spherical valve had been replaced and the seals declared functional, the penstock refilling process began with slightly opening the wicket gates and allowing water to gravity flow until stabilised with the lower reservoir. The next step involved releasing water through the outlet works installed in the permanent cofferdam at the upper reservoir, to fill the vertical shaft until the water level stabilises with the pond level behind the cofferdam. Finally, one of the in-service pump-turbines was used to pump water to the upper reservoir until normal operating levels are achieved.

When completed in 2010, Blenheim-Gilboa’s four upgraded pump-turbines will have a combined new generating capacity of 116MW. The plant will be more efficient thus permitting production of more power from the same amount of water, and will have a greater operating range while extending the facility’s record of reliable service for decades into the future.