A steam-driven emergency water pump has been demonstrated when submerged in water. During two eight-hour flooding tests in February 2013, the ClydeUnion TWL was found to operate normally. 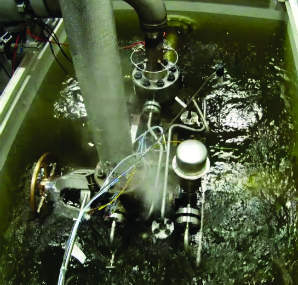 ?The pump, whose design dates back 50 years but has recently been updated, is used in key emergency reactor cooling systems in both PWRs and BWRs. In PWRs it is part of an auxiliary feedwater pump that moves water from an emergency feedwater tank to the steam generators to remove decay heat when the main feedwater system is unavailable, or during startup or shutdown. In BWRs it powers the reactor core isolation cooling system, providing water to the reactor for decay heat removal.

Inside the pump, NSSS steam turns a forged turbine wheel, which spins a central shaft and the attached impeller. It runs on water-lubricated bearings, and has self-contained governor and mechanical (centrifugal) and electrical overspeed indicators. It can pump up to 350 m3/hr with delivery head up to 1200m. Speeds are around 7500 rpm and temperature is around 120°C.

The pump was submerged several times over the tests, which were conducted in a purpose-built tank intended to simulate flooding conditions at ClydeUnion Pumps’ Glasgow, UK factory. Representatives of five utilities were witnesses (but for safety observed the tests remotely). The test began with flooding the TWL with cold water, starting it with design steam conditions, and conducting a series of performance tests and an emergency stop/start while submerged. The test tank was then drained while the unit continued to run and the temperature of the unit was allowed to stabilise with the steam supply at 290°C (554°F) before rapidly flooding the tank with cold water. A second performance test was then conducted with a total of eight hours submerged running with no reduction in performance or integrity.