Siemens, which has been investing in additive manufacturing technology since 2009, has achieved a breakthrough with the successful testing of a 3D printed gas turbine blade. The technology offers huge advantages in development time and cost, spare part manufacturing, and performance. Staff report 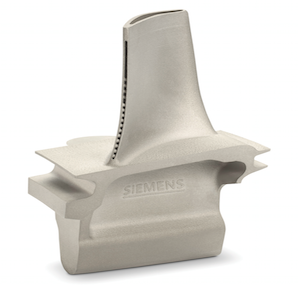 Siemens has achieved what looks likely to be a genuine breakthrough in gas turbine manufacture by successfully completing its first full load engine test runs of GT blades produced entirely using additive manufacturing (AM) technology. In what is likely to prove one of the most challenging applications for this technology, Siemens have validated multiple AM printed turbine blades in a conventional blade design at full engine conditions. The components were tested at 13 000 rpm and temperatures beyond 1250°C.

Siemens also tested a new blade design with a revised and improved internal cooling geometry, also manufactured using the AM technology. The project team used blades manufactured at its 3D printing facility at Materials Solutions, the newly acquired company in Worcester, UK. This company specialises in high performance parts for high temperature applications in turbomachinery where accuracy, surface finish and the materials quality is critical to ensuring operational performance of the parts in service. The tests were conducted at the Siemens testing facility in the industrial gas turbine factory in Lincoln, UK.

Willi Meixner, CEO of the Siemens Power and Gas division, commented: “Additive Manufacturing is one of the main pillars in our digitalisation strategy. The successful tests were the result of a dedicated international project team … in Finspång,LincolnandBerlintogetherwith experts from Materials Solutions. In only 18 months they completed the entire chain from component design and AM material development to new methods for lifing simulations and quality controls.”

Siemens uses AM extensively for prototyping and has introduced serial production solutions for rapid manufacturing of small fuel mixers and for quick repairs to burner tips for mid-size gas turbines. For parts production in industrial gas turbines, the benefits of AM include an approximate 50% reduction in lead time and a 75% reduction in development time.

Additive manufacturing is a process that builds parts layer-by-layer from sliced CAD models to form solid objects. This enables highly precise solutions to be formed from powdered high-performance materials. The layering process is by selective laser melting (SLM), which melts the powder layer by layer without sintering. A laser beam moves across the bed of metal powder and welds an initial layer of the three-dimensional object. Another layer of metal powder is then applied over the surface and the laser prints a second layer. Step by step, the turbine blade is created. The resulting density is > 99.7 % which is typically better than cast quality.

The alloys used by Siemens are nickel- based polycrystalline superalloys which show high strength even at very high temperatures, unlike steels. Temperatures in the blades can exceed 1000 °C.

The SLM process delivers a very homogeneous fine grained microstructure. Again, unlike generally used cast materials there is little or no segregation. The microstructure achieved during the process has to be altered by a special heat treatment procedure after the build process.

“This exciting technology is changing the way we manufacture by reducing the lead time for prototype development up to 90%,” said Meixner. “Siemens is a pioneer in additive manufacturing. We can accelerate the development of new gas turbine designs with an increased efficiency and availability and can bring these advancements faster to our customers. This new flexibility in manufacturing also allows Siemens to develop closer to the customer’s requirements and also to provide spare parts on demand.”

The blades were installed in a Siemens SGT- 400 13MW industrial gas turbine. At full load each of these turbine blades is travelling at over 1600 km/h, carrying 11 tons of load. It is surrounded by gas at 1250°C and cooled by air at over 400°C. The blade design with its new cooling geometry tested in Lincoln showed improved cooling with the potential to increase overall efficiency of the turbine.

To test blade quality investigation of static (ie tensile, creep) and dynamic high cycle and low cycle fatigue (LCF, HCF) properties were undertaken. Inherently small grain size produced by the process is critical to creep properties which were mitigated by a special heat treatment after printing of the components. The Ni-based alloys are prone to cracking when welded, and selective laser melting is essentially a weld process, so a process window had to be determined in particular for the material at hand. An additional complexity is that since the geometric conditions can cause build-up of stresses and, hence, cracking.

Post-processing testing was necessarily comprehensive – careful de-powdering, support removal, and heat treatment to optimise the microstructure and material properties. Non-destructive testing was carried out to minimise risk of failure due to any process defects. Flow tests and other assessments were undertaken to ensure proper cooling of the blades.

Before blades were tested, a finite element analysis was performed to determine lifetime from the known material data, to ensure survival of the blades in the engine. An extended FMEA (failure modes and effects analysis) was performed to reveal potential risks.

During the entire test procedure, the blades were kept under observation to avoid major failure. The full load test is designed to compare the performance of various blade designs – which was achieved. But the test was not designed to validate the long term performance of additively manufactured turbine blades.

A major benefit is the significant reduction in time taken to get to technology validation and hence to market – in the best case lead time can be cut from two years to two months. There is a significant reduction also in the cost of testing blade designs, and an increase in the flexibility conferred, owing to the fast process devoid of new tooling, and added together these advantages enable designers to test disruptive design options in rapid succession instead of advancing by small evolutionary degrees towards design optimisation.

One of the advantages of AM is to allow creation of component geometry (for example thinner walls, straighter flow paths) that cannot be produced today with physical tooling 3D limitations. The testing undertaken was not impacted by these limitations but exhibited a completely new cooling system which Siemens had wanted to evaluate. Using AM allowed it to undertake this without the significant expense of tooling and with a timescale of weeks rather than years.

With 3D printing processes, says Siemens, shapes can be produced that would be impossible using any other production process. Someday it may be possible to print turbine blades with more delicate internal air ducts. This would improve blade cooling, which would not only permit higher temperatures in the combustion chamber but also increase efficiency.

The first 3D printed component for a heavy- duty gas turbine has been in commercial operation since July 2016, and Siemens has already introduced serial production solutions for less-stressed components in the gas turbine compressor and combustion systems and in February last year it opened a new production facility for 3D printed components in Finspång, Sweden But the successful test of the advanced blade design is the latest step towards using the full potential of AM. Siemens is in the process of developing gas turbine designs which are only possible with AM and will extend its serial production capabilities for printed turbine equipment.

The company is currently developing solutions ready for series production in the manufacture of gas turbine burner nozzles and the repair of burner heads.