ANSYS simulation was used to assess and determine the safe operational life of an evaporator in the nuclear industry. By Richard Field 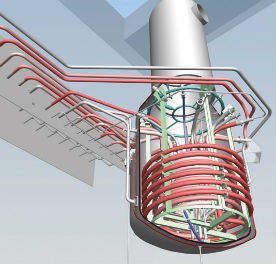 The National Nuclear Laboratory (NNL) provides independent, authoritative advice on nuclear issues and deploys nuclear technology solutions on a commercial basis to a broad range of markets. As a key part of this deployment, NNL’s Impact and Structural modelling team has been providing Finite Element Analysis solutions to the nuclear industry for more than 25 years.

The team’s main role is to demonstrate acceptability of nuclear plant and equipment through engineering analysis. Work varies from design assessment and optimisation of new plant and equipment, to assessment of existing plant and equipment over the anticipated operational lifetime.
Modelling scenarios typically cover normal operational loads, fault loads, extreme loading due to earthquake, fire, explosions, fracture and fatigue. Analysts regularly assess designs to international standards, including ASME, BS and European codes, and are the subject of regulatory review.

As part of work for a contract between NNL and Sellafield Ltd, NNL needed to assess the structural integrity of evaporators on the Sellafield site in the UK.

Evaporators are used to reduce the volume of HA liquor on the Sellafield site prior to interim storage and vitrification. These evaporators are steam-heated or water-cooled and are manufactured from corrosion-resistant stainless steel (Figure 1). Their operational lifetime is limited by the corrosion of the interior heat-transfer surfaces that come into contact with hot, corrosive liquor.

Steam is introduced to the coils to bring the liquor to boiling, and liquor is added to keep the volume constant. Evaporation then continues until the target concentration is achieved, whereupon the steam is halted and the vacuum vented. The liquor is then cooled by introducing water to the coils, and once cool the liquor is transferred to storage tanks, to await vitrification and long-term storage.

However, despite the simplicity of this process there are some critical issues that need to be monitored. Firstly, the liquors to be reduced in volume are corrosive, so high wall thicknesses are used to provide a large corrosion allowance and remain safe.

Consequently, NNL needed to design a probe that can be deployed to measure wall thickness for the full length of each coil. The probe readings form an essential component of the input data to the analyses required to demonstrate that the stresses induced in the coils over the future lifetime of the evaporator are within acceptable levels. This requires finite element models of the coils that match the measured geometry and thermal and structural loadings.

The probe measures wall thickness at eight positions around the circumference and their angular orientations at set intervals along the length of the coil (Figure 2). The probe is inserted until it reaches the end of the coils within the evaporator and then slowly withdrawn, taking the measurements (on the order of thousands) as it goes.

The model simulates the effect of future corrosion on stress and evaporator life by a combination of ANSYS finite element modelling, bespoke software for calculating coil wall temperatures and spreadsheet software to advance corrosion from the current levels into the future. The corrosion equations are derived from analysing the corrosion patterns in the coils to date along with knowledge of the liquors evaporated from plant data.

This has enabled a series of finite element coil models to be built with progressively thinner coil walls; these models have been developed over approximately seven years.

The lifetime assessment process begins with an inspection of the coils to obtain the actual geometry. It stores the data in a tabular form.

From this base, NNL generates an ANSYS model that reads this data to build a finite element model of each coil reflecting the actual geometry at the time of the inspection.

The ANSYS ‘coil models’ are constructed by generating centre line geometry of each coil from the original design drawings. Using the centre line as a basic construction geometry, ribs are made of the coil cross sections along the length of the coil using the coil geometry measured by the probe.This results in a ‘wireframe’ model of the geometries of each coil.

Using the wireframe geometry a solid 3D volume representation was constructed of each coil. A finite element mesh was generated in the resultant volumes. The variation in the coil wall thickness around the circumference of the evaporator can be seen in Figure 3, a cross-section though the coil, and Figure 4, which is an overall contour plot of wall thickness.

The variation in wall thickness is due to factors including the stretching and compression of the walls as the coil was formed during manufacture and the cooling effect of condensate, which varies the corrosion rate. The coils use condensing steam to take advantage of the large amount energy stored as latent heat.

Wall temperatures are predicted using bespoke software, validated by test rig work. This provides tabulations of temperature versus depth of coil in liquor versus wall thickness (both liquor-side and steam-side). These temperatures are applied as thermal boundary conditions for the steam heating phase.

The wall temperatures for the cooling phase are also applied in the same way except that the equations are derived from heat-transfer coefficients. A thermal simulation then interpolates the temperatures through the wall thickness. This delivers the thermal boundary conditions for the structural model.

Pressure loads are added, including hydrostatic pressures of liquor, steam and cooling water as appropriate. Gravity loading is applied and restraints are added at the point the coil meets the evaporator wall and at the coil supports.

The model is run and those supports with a negative reaction force (where the coil pulls away from the support) are removed and the model resolved. This is repeated until all reaction forces are positive, delivering a solved model from which stresses can be extracted.

"Now that the model has been built, it is a quick process to build the geometry and update results"

Now that the model has been built, it is a quick process to build the geometry and update results following future inspections due to the automation of the model-building process. NNL can simply provide a new inspection data file and have the model automatically build and run with minimal further input. The new data might come from a new inspection or a "derived" set based on a real inspection but with the corrosion advanced using known corrosion rate equations (based on actual in-situ measurements and process liquor history).

This allows a set of ANSYS simulation to be performed that produces a time line of stress histories (the change from heating to cooling cycles, for example) as corrosion proceeds. This feeds into fatigue calculations that enable future wall thickness minimum limits to be determined and the future life of the evaporator to be predicted whilst maintaining safety and effectiveness.

These results are fed forward to safety and risk assessments and ultimately to the nuclear regulator for permission to continue operations.