A new US model can predict fish population response to dams. Researchers have used a model of endangered Atlantic salmon in Maine’s Penobscot River as a case study. 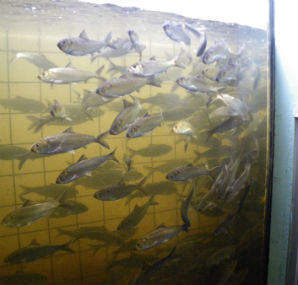 Researchers have developed a model to assess how dams affect the viability of sea-run fish species that need to pass dams as they use both fresh and marine waters during their lifetimes. The National Oceanic and Atmospheric Administration’s (NOAA’s) Northeast Fisheries Science Canter (NEFSC) and Greater Atlantic Regional Fisheries Office (GARFO) have partnered up on this project to test how varying passage efficiency at dams related to survival rates.

Using a model of endangered Atlantic salmon in Maine’s Penobscot River as a case study, NOAA researchers found that abundance, distribution and number of fish increased upstream when dams in the primary downstream segments of the river were removed or fish passage survival was increased. The findings were recently published online in the ICES Journal of Marine Science.

Models like this one, which analyse population viability based on a variety of biological, environmental, and functional factors, can be used to predict ecological responses of fish populations. They can also provide a way to evaluate and prioritise management and restoration actions for fish that migrate between fresh and salt water.

"The Dam Impact Analysis Model enables us to see what happens when you change one factor, like marine or freshwater survival," said Julie Nieland, a researcher at NEFSC’s laboratory in Massachusetts and lead author of the study. "For example, salmon abundance increased when marine or freshwater survival rates were increased. However, the increase was larger when marine survival increased than when freshwater survival increased. We are also able to change the survival rate and passage efficiency at individual or multiple dams to look at the effects on salmon abundance and distribution throughout the river system. Those changes tell us a lot about the factors influencing the population."

Dams and low marine survival rates are two of the biggest threats to many diadromous fishes, which spend part of their life in freshwater and part in the ocean. Dams can prevent or impede fish passage and degrade the habitats upstream by inundating formerly free-flowing rivers, reducing water quality, and altering fish communities. They can also kill and injure fish during migrations. Direct mortality occurs when fish pass through turbines, over fishways, or through fish bypasses. Indirect mortality comes from increased predation in altered habitats, health risks from injuries, and the added effects of stress and injury that come with passing one or more dams.

"The good news is that these effects can be reduced by installing or improving fish passage devices, modifying dam operations during peak migration periods, changing the structure of the dam to reduce injury and mortality, and by dam removal," Nieland said.

In the Penobscot River, the second largest river in New England, fish passage on the lower parts of the river has been helped by the removal of Great Works Dam in 2012 and Veazie Dam in 2013, and by building a natural river channel bypass around Howland Dam in 2015 as part of the Penobscot River Restoration Project. Access to habitat along the river and its tributaries has been improved for sea-run fish, including Atlantic salmon, American shad, river herring, striped bass, Atlantic sturgeon and shortnose sturgeon. In addition, increased survival standards for Atlantic salmon at many remaining dams have been implemented as part of the Federal Energy Regulatory Commission (FERC) licensing requirements.

NOAA Fisheries researchers used the model to look at the impacts of 15 FERC-licensed hydroelectric dams in the Penobscot River watershed. Their results showed the number and location of dams affected adult salmon abundance, distribution, and the proportion of wild fish using various parts of the watershed. Salmon numbers increased as the number of hydroelectric dams decreased. Mainstem river dams had more impact than dams on tributaries. Salmon abundance also decreased as indirect mortality from effects of having to navigate past dams and up fish ladders or other passages increased. FERC is required to consult with NOAA Fisheries Service to ensure that continued dam operation does not impede recovery of Atlantic salmon.

In 2014, more than 800 American shad and 180,000 river herring were counted by scientists at the newly-installed fish lift at the Milford Dam, the first mainstem dam on the system. Prior to 2014, there were no known American shad above Milford and very few river herring. Diadromous fish that survive passage at the Milford fish lift will emerge into historic spawning, nursery and rearing grounds that have not been accessible since the early 1900s.

Passage at the remaining dams on the Penobscot River will be important to the recovery of diadromous fish populations. The model can be used to help estimate what passage rates are needed to avoid jeopardizing these populations.

"The Dam Impact Analysis Model provides managers with a way to assess the levels of survival needed for Atlantic salmon at several large mainstem dams in the lower Penobscot River," said Jeff Murphy, an endangered species biologist at GARFO. "Going forward, it will be an extremely important tool for identifying survival standards for Atlantic salmon at other dams in the Penobscot River watershed as we work to recover the species in Maine."

"There is still a lot of work to do to improve access to more historic river habitat for diadromous fish," Nieland added. "Hundreds of dams and thousands of road-stream crossings, or culverts, remain as barriers to fish passage in the Penobscot watershed. The model can help us plan for restoration and management actions to increase survival and abundance of many of the sea-run fish species, including those that are endangered or threatened."