Powering up the Mississippi 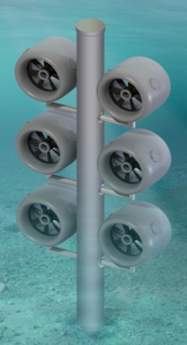 US company Free Flow Power (FFP) is well on its way to developing extensive hydrokinetic facilities in the US. FFP’s engineering and hydrology team began evaluating the hydrokinetic potential of US rivers in early 2007. After studies of more than 80,000 possible sites the company decided to focus on the Mississippi river for its initial projects.

The Mississippi river basin drains 40% of North America. It is the largest available source of river energy in this region and has been described as being top in terms of flows and volumes. Its importance as a navigational resource has limited the development of hydroelectric facilities in its lower reaches, preserving the opportunity for hydrokinetic development. FFP’s largest grouping of sites that share many of the same ecological characteristics are located on the Lower and Middle Mississippi river.

“Each site varies in terms of depth and size, but generally we are targeting an installation of 6MW per mile, or 600 turbines, in areas that are large enough to locate the turbines without interfering with navigation or other uses of the river,” Lissner says. “We have designed our turbines to be small enough to deploy them in a variety of arrays, such as vertically on a pylon, horizontally between two pylons, or suspended from the surface from barges.”

In 2008 FFP obtained 55 preliminary permits from the Federal Energy Regulatory Commission (FERC) for hydrokinetic projects in seven states along the Mississippi river, as well as additional permits for projects on the Missouri and Ohio rivers. A FERC preliminary permit enables a company to study the characteristics of these sites in preparation for filing a licence application, which must be done within three years of the permit’s issuance. During this time, FFP will be gathering data about the sites, conducting outreach to stakeholders, and performing tests and studies that are necessary to prepare the application for a licence.

Currently FFP has seven ‘lead sites’ on the Lower Mississippi at which the company is using FERC’s integrated licensing process – the aim of which is to promote discussion and environmental studies before a licence application is filed. These sites were designated as lead sites because they have environmental characteristics that are representative of the whole river system.

“We have already conducted public meetings and site visits in the area of these sites, and we anticipate performing environmental studies at them as well,” Lissner says. “The information we get from these will be relevant to the filing of our licence applications for our other sites through FERC’s traditional licensing process.”

Using a combination of traditional and integrated licensing processes will enable FFP to address the environmental issues, as well as the effects of the whole system. Lissner says: “We believe that this process is the most effective way for us to address the concerns of all of the stakeholders, wherever they are located geographically.”

FFP plans to file licence applications for its Mississippi river projects by the end of 2010. It has also just completed a series of public meetings and site visits at the lead sites, and is working with the regulatory agencies to determine what environmental tests need to be done. These tests should be carried out next year. At the present time FFP is working on deploying a turbine on a barge in the Mississippi river to continue gathering operational data.