Russia’s DNR Centre has completed the challenging decommission of EI-2, a uranium graphite reactor. The project was a world first and posed significant technological and environmental challenges as Andrey Izmestyev, Director General of the JSC DNR Center explains. 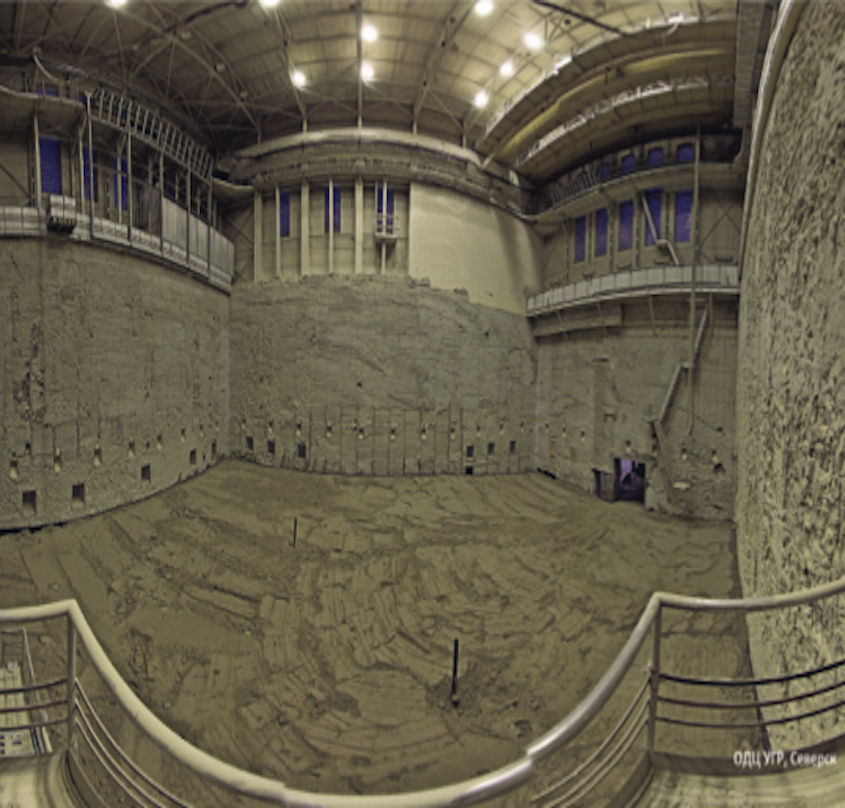 In September 2015, experts at Russia’s Pilot Demonstration Centre for Decommissioning of Graphite-Uranium Reactors (DNR Centre, also known as PDC UGR), part of Rosatom, the state nuclear corporation, completed the decommissioning of EI-2. This is a commercial plutonium- production nuclear reactor in the closed city of Seversk, 5km from Tomsk. A unique and complex technology was developed to carry out in-situ disposal of the reactor.

Successful completion of the project represents another important and practical Russian contribution to international non- proliferation efforts. These efforts include the transport to Russia of used nuclear fuel from research reactors in other countries for processing and safe storage – by the end of 2015 Russia had accepted over 2,150kg of nuclear fuel from abroad under this programme.

The EI-2 was decommissioned in stages. First, the support systems and equipment inside the reactor building were dismantled, but not the reactor installation. Second, concrete was placed in the areas below the reactor, up to the bottom biological shielding. Cavities in the areas were filled with specially developed barrier mixtures based on natural clay. Barrier materials were used to fill the underground areas inside the reactor building and adjacent to the reactor, ensuring there were no voids. Next, the engineering structures were decontaminated and the superstructures of the building were dismantled. Finally a weatherproof barrier was placed over the entombed facility. EI-2 is now defined as a mothballed facility for special radioactive wastes.

Originally two decommissioning methods had been proposed: to leave the reactor on-site under strict security surveillance; or to dismantle the facility completely. Both solutions are very costly, which is why no uranium-graphite reactor in the world had been decommissioned before EI-2. In the first method the building must be heated and maintained, the site kept under surveillance and radiation levels constantly measured. This requires half the employees involved in the reactor operation to remain at the site. The second solution is expensive and risky and poses the problem of disposing of the contaminated structures.

There were 13 plutonium-production graphite moderated reactors built in the former USSR at that time – five at Production Association Mayak in Ozersk, five at Seversk and three at Zheleznogosk in Krasnoyarsk. The Mayak reactors – A, IR-AI, AV-1, AV-2, and AV-3 – were commissioned between 1948 and 1955 and shut down between 1987 and 1990.

The I-1 reactor had a single-pass system for its core cooling and the cooling water was discharged into the Tom River after passing through special purification filters. The other four reactors were constructed with closed cooling systems and cooling towers.

In 1991 the US and the USSR entered into a treaty to shut down all first-generation plutonium-production graphite-uranium reactors. However, graphite-moderated plutonium production reactors are difficult to decommission because of the amount of irradiated graphite in their cores. EI-2 is the first such reactor decommissioned using the in-situ entombment approach.

The other Seversk reactors are scheduled to be fully decommissioned by 2030.

JSC (joint stock company) DNR Centre was established in September 2010, under the Nuclear Industry Development Programme
of the ‘Plan of organisational & technical measures to create an industry-wide system for decommissioning nuclear and radiation hazardous facilities’. DNR Centre is an enterprise which is part of the Back-End Division of Rosatom. The division is headed by the Federal Centre for Nuclear and Radiation Safety (JSC FCNRS).

In preparation for the work a safety justification had also been required, in addition to developing the concept of on-site entombment, putting in place the necessary regulatory and legal framework, and developing the technology. The following factors were taken into account in the safety assessment:

A number of criteria were established for the decommissioning procedure:

In preparation for the work the geological environment around EI-2 was thoroughly examined, including the groundwater. Comprehensive engineering and radiation surveys were undertaken. These included diagnostic surveys of the structures to assess their condition along with radiation surveys of primary equipment, buildings and other structures. A radiation survey of the graphite stack was conducted and graphite samples sent for analysis. Neutron and photon scanning of reactor facilities was undertaken to identify areas where there had been fuel spillage and to identify their isotopic composition. A temporary facility was constructed in preparation for storage of radioactive waste following demolition of existing storage facilities at the site that were outside current design parameters.

Extensive research went into developing a barrier material that would be suitable for filling the reactor and the area around it. Natural materials were chosen to ensure stability of the entombed radionuclides over the long period required. The material had to have a high sorption capacity for radionuclides with different chemical properties and a mixture of natural materials based on natural clay or clay rock was selected. The material also had to have low water conductivity, natural compression and good fluidity. To achieve this, the mixtures were thermally treated and processed by machine.

Development of the barrier material began in 2008, involving DNR Centre and the AN Frumkin Institute of Physical Chemistry and Electrochemistry of the Russian Academy of Sciences (IPCE RAS). Various clay types with appropriate properties were sourced from three different regions of Russia. They were dried, milled and combined in the required ratio. The resulting powder was capable of filling the smallest cavities in the reactor and building structures. It formed a barrier that could contain radionuclides, even in an extraordinary event such as a groundwater surge. Computer modeling and mock-up tests were undertaken to ensure maximum filling of technological spaces that were difficult to access.

The EI-2 building covered an area of 51.3 metres by 52 metres. Above ground it reached a height of 31.5 metres and it extended 38 metres below. The underground structures were made of cast reinforced concrete. The reactor vault was 20.6 by 20.6 metres in area, with the top at ground level and the bottom 21.4 metres below ground. The total weight of metal structures within the reactor vault was 3,000 tonnes. The graphite stack had a volume of 804 cubic metres and it weighed1,422.6 tonnes. The graphite activation products included hydrogen-3, carbon-14, chlorine-36, and cobalt-60. The carbon-14 accounted for 95% of all irradiated graphite activity.

In preparation for the decommissioning work, the following activities were undertaken:

Initial tasks included dismantling the process equipment and systems at EI-2, including the cooling pond for spent nuclear fuel. In addition, sludge deposits from the ShT-2 water-filled storage vaults, where part of the graphite sleeves was stored, were retrieved and conditioned. Metal structures – water communications and pipelines – on top of the reactor were dismantled and so were the fuel discharge devices and cooling systems on each of the reactor’s fuel channels. Waste underwent decontamination, fragmentation, sorting and packaging and was placed in a temporary storage area.

Dismantling of EI-2 building superstructures followed and a protective covering was then placed over the building foundation.

The total cost of the mothballing, including removal of all metal radwaste, was RUB2.3bn ($34 million). Reducing the cost of decommissioning without decreasing the reliability of the mothballed facilities is possible under certain circumstances. For example, if objective input data resulting from a comprehensive engineering and radiation survey are obtained, it is possible to avoid conservative design decisions on decommissioning and costs can be reduced. Development, implementation and constant improvement of decommissioning technologies and radioactive waste treatment technologies could also reduce the costs of turnkey decommissioning services. Finally, cost reduction is possible if decommissioning is undertaken without extracting low-level carbon steel radwaste. Research at IPCE RAS has shown that corrosion products improve the anti-migration performance of barrier materials.

In September 2015 the pilot project to put in place a facility for long-term mothballing of special radwaste at the EI-2 site was successfully completed. Rosatom now has the required competences for dealing with the back-end of uranium-graphite reactors and can carry out any tasks involved in decommissioning such facilities. However, decisions on whether and how to decommission other uranium-graphite reactors should be based on the particular situation, because different reactors have differences in graphite structure and reactor operating conditions. In addition each reactor location has different geological and hydrogeological characteristics.

DNR Centre also took part in the preparation of an international project on the solution of the issues related to irradiated graphite processing, now as GRAPA (Irradiated Graphite Processing Approaches). At present about 250,000 tonnes of irradiated graphite has accumulated worldwide, including 60,000 tonnes in Russia. However no methods for processing the irradiated graphite have yet been defined because of the specific nature of this type of radioactive waste. The GRAPA project, which started in February 2016, was established with IAEA support and will be implemented over three years.

It aims to tackle a wide range of tasks, including graphite radioactive waste characterisation; developing safety technology for graphite removal from the reactor; and processing, temporary storage and disposal of the graphite. The key distinction between GRAPA and earlier projects on management of irradiated graphite is that GRAPA is moving from laboratory research to pilot-scale and commercial demonstration of technical solutions. The involvement in the project of all those countries with experience of graphite waste management (Russia, the UK, the US, France, Germany, etc.) makes it possible to consolidate the available experience and technical approaches.

Taking into account the available infrastructure – two commercial sites with shut-down uranium-graphite nuclear reactors – and its technical base, the IAEA has supported a proposal to base an international centre for fine-tuning graphite management technology at the DNR Centre. This will help to ensure the development, pilot-scale and commercial demonstration of technology for graphite radioactive waste management at minimum cost.