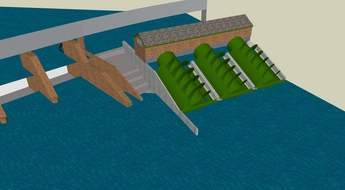 The non-tidal river Thames falls 110m from its navigable source at Lechlade in the county of Gloucestershire to Teddington lock in London. Within that 256km the river passes through many famous English cities and towns such as Oxford, Henley and Windsor. Goring and Streatley, two villages straddling the river, are located exactly at the mid-point of the non-tidal Thames at a point historically called the Goring Gap. On average, more than five million tonnes of water flows through the Goring Gap every 24 hours, representing a significant amount of energy. In the past, scores of mills along the Thames exploited this energy, but with the introduction of the national electricity grid after 1945, virtually all mills have been dismantled. One that still survives is at Cleeve, just 1km north of Goring.

The idea of generating hydroelectricity from the river was presented to Goring Parish Council (GPC) in October 2005 by Dave Holt. It met with unanimous support, so three hydro consultancies were approached to undertake a feasibility study. At the same time the desire to generate hydroelectricity was added to the first Goring-on-Thames village plan. During this time Holt broached the idea with Rob Alexander of the Environment Agency (EA), Ian Bacon (now freelance) of Thames Valley Energy (TVE) and Heather Saunders, responsible for environmental projects with South Oxford District Council (SODC). All were very supportive.

The feasibility study – part funded by GPC and SODC – was delivered in June 2006 indicating that it was a financially and environmentally sound project capable of generating 170kW of electricity from three kaplan turbines and 12 polymer turbines saving 300 tonnes of CO2 emissions per annum. The total cost of the scheme was estimated at £1.5M (US$2.3M).

The Goring and Streatley Sustainability Group (GSSG) was founded by Kay and Martin Baker of Streatley in 2006 and is made up of local people concerned about the environment, living sustainably and reducing CO2 emissions. It has around 80 members, a Constitution and bank accounts. Holt joined this group as hydro project leader with Chairman Nikki Swan, Secretary Trevor Coombs and Treasurer Jonny Riggall.

Encouraged by the findings of the feasibility study, stakeholders were brought together in March 2007 including the EA, SODC, Chilterns Area of Outstanding Natural Beauty (AONB), North Wessex Downs AONB, Streatley Parish Council, Goring Parish Council, GSSG and relevant land owners. It was agreed that funds should be raised to produce an outline design study that would provide more detailed information as indicated below.

The hydro scheme is a large, non-profit community project that intends to plough the income from the sale of hydroelectricity into other local sustainable projects and is therefore striving to obtain a significant proportion of the funding through UK and EU grants.

At a subsequent meeting with the EA it recommended that the group consider utilising (reverse) Archimedes Spirals as they are fish and eel friendly. Extensive tests under controlled conditions and 24hr video surveillance on the newly commissioned 55kW Archimedes Spiral at the Dart Country Park in Devon showed no damage to hundreds of fish passed through the Spiral. Other advantages of this technology include:

• Simple to construct with low CO2 emissions during manufacture.

• No need for a fine mesh to deter fish, thereby enhancing efficiency.

• Easy maintenance, as both bearings are above the normal level of the river.

• Low installation costs as there is no need to dig down into the river bed as for vertically mounted turbines.

• Performance is maintained over a wide range of flows.

The outline design study funded by SODC, Chilterns Sustainable Development Fund (SDF), North Wessex Downs SDF and Streatley Parish Council was completed in March 2008 by Dave Mann of Mannpower Consulting and Chris Elliot of WRE Consulting, and confirms the viability of the scheme. The recommended location and technology consumes the maximum amount of water (21m3/sec) allowed by the EA to maintain flows over the rest of the weirs. With three 3.5m diameter Archimedes Spirals located next to the lock-keeper’s house, the peak output is estimated at 246kW (equivalent to the average daily consumption of 250 homes), saving over 500 tonnes of CO2 each year if conventional electricity losses in transmission cables are taken into account. Total cost of the scheme is estimated at £1.1M (US$1.6M).

The environment survey to examine the ecology of the river and to identify any exotic species that could be compromised by the scheme was begun in June 2008 funded by Streatley Parish Council, GSSG (from voluntary fund raising activities) and Goring Amenity Association. In parallel, grant applications were made to Chilterns SDF, North Wessex Downs SDF and SODC to complete the survey in summer 2009 and they have all once again contributed to the scheme.

The flood risk analysis (FRA) is required as the spirals constitute an obstruction on the existing overfall weirs. Rob Alexander of the EA kindly offered the resources of the EA for the initial FRA computer modelling, completed in the summer of 2008. This has indicated a very slight increase in upstream and downstream river levels when the river is in full spate. Further modelling is required to understand how this increase could be absorbed by better utilisation of the existing Streatley side sluice gates, an additional sluice gate and by the existing meadows and flood plains. Funding sources are now being researched and it is hoped that the computer modelling can be completed to the satisfaction of the EA by end of 2009.

Planning applications will require fairly detailed drawings to be submitted to both the EA and SODC. SODC planning was informed of the scheme from the beginning, have received the outline design study and have made no objections to the project on any grounds. A land drainage consent licence and impoundment licence must be obtained from the EA.

At the moment, several sources of funding are being evaluated for the project itself. These include EU grants for which the group has enlisted the services of James Elles, the European MP for the South East of England, who visited the site in October 2008. GSSG is also seeking philanthropic contributions from local wealthy individuals and is considering a local share issue, such that all residents of both communities may participate in the project. A notification of the possibility of a share issue was publicised in the Goring Gap News in November 2008, resulting in dozens of individuals accessing the web site www.gssg.org.uk indicating how much they would be prepared to invest.

Major fund raising is expected to take all of 2009 and the best part of 2010. It is hoped to be able to order the Archimedes Spirals in autumn 2010 – as there is a six-month lead time – for installation in the summer of 2011 when river flows ought to be low.

Although the amount of electricity produced does not sound significant, the financial return of around £120,000 (US$179,000) per annum will be sizeable and will grow in line with energy price inflation (>12% per annum this century). This will be returned to the communities of Goring and Streatley to fund other sustainable community projects in the future. Thirteen other communities on the Thames have now approached GSSG to learn from the group’s experience and seek advice.

GSSG will ensure that the scheme will educate the general public and children on sustainable, zero carbon, zero pollution energy production. Remote displays indicating how much power is being produced and a schematic of the project and its benefits for all to read will be located near the lock and road bridge. It is forecast that school parties will travel to the site to learn from the project.

Likewise this project will provide a huge tourism magnet which will be beneficial to the local economy and local businesses. All sponsors and financial contributors to the project through all the phases will be given prominence on the displays.

The Swan Hotel at Streatley and the owners, Nike Group, will be able to advertise that they obtain the majority of their electricity from clean, sustainable sources for at least three generations.

Not least the parishes of Goring and Streatley will be trailblazers as this will be the first such installation visible to the public and river users on the Thames. Incidentally, Goring Mill was the first on the Thames to produce electricity from the river – in 1895 – and this project will be a perfect ‘closing of the circle’.

GSSG would like to thank the following organisations for their generous support of this community project: SODC, Chilterns and North Wessex Downs Sustainable Development Funds (part of the AONBs), the Environment Agency, Goring and Streatley Parish Councils, Goring Amenity Association, Mann Power Ltd and WRE Ltd.