Power struggle in the Amazon

Communities in the Amazon region of Brazil are working with energy companies to gain access to much-needed electricity. Peter Richards reports on a pilot micro-hydro scheme designed to help supply power to a remote rural community 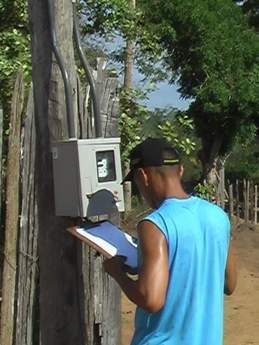 Wealth and conflict are often found together. In the wealthy Amazonian region of Brazil, hundreds have died in fights related to land ownership, with the region responsible for a higher proportion of assassinations than any other part of the country.

There is a feeling among Brazilians that with fairer distribution of the resources from the Amazon Region – plants, minerals and timber – local communities could prosper and remain in the region rather than be forced to migrate to metropolitan areas in the southeast region of Brazil.

Many of the millions living in this sparsely populated region are below the poverty line and unable to make effective use of these resources, due to lack of infrastructure. Deficiencies in electricity services pose a bottleneck to this remote region, hindering the development of communities along the Amazon river basin.

Bringing energy to these communities can yield benefits traditionally found via rural electrification programmes: improved businesses, schools, health clinics, homes and public governance. Thus in 2003, the Brazilian government sought to remedy the problem when President Lula pledged to provide all Brazilians with modern electricity services (Luz para Todos – Light for All) by 2008.

It was a laudable and ambitious promise where remote communities were concerned. Initially, utilities did not take great interest in rural electrification – it seemed too expensive and yielded low revenues and it was easier to target more accessible customers. The concept of power grid extension to remote Amazonian communities appeared impractical from the start. Conventional extension of the grid system was not suitable in many areas of this region, which contains a considerable proportion of the 10M people that Lula wanted to reach.

‘Amazonia is mostly a flooded area where transmission/distribution networks are technically unfeasible or not competitive,’ says Claudio Ribeiro, the Winrock executive in charge of a plan to create more community-based micro-renewable energy in the Northern part of the Amazon, where energy access is at its lowest. Winrock International is an organisation that works on clean energy and other sustainable development issues. ‘Our pilot micro-hydro project has reached commercial and development approaches that the Ministry of Mines and Energy and the Luz para Todos Programme recognise as a potential solution for remote communities in the Amazon.’

Just as the utilities struggle to address the energy access problem to scattered, small villages in the Amazon, the vested interests that receive federal subsidies may be opposed to fully extending the same subsidy levels and schemes to renewable energy projects, particularly micro-hydro ones. Today, diesel power generation in the Amazon continues to enjoy a higher subsidy level than any renewable source.

The Brazilian government has developed a subsidy system that keeps the Northern region from paying prohibitive tariff levels when compared to the other areas in Brazil. Fossil fuel power production is a high proportion of the energy generation mix so that the region’s power generation bills are particularly high.

Most existing power plants in the area run on diesel. Thousands of small-medium scale systems using diesel generators are currently operational there, some of which are run by utilities at very high costs while others are not effective due to poor maintenance or uncertainty of regular fuel supply.

Hence, though some incentives have been created for renewable energy sources, ‘there is still a strong resistance from traditional utilities which are familiar with fossil fuel technologies for the creation of mechanisms that would push them towards renewable sources – a situation reinforced as the high subsidy level for fossil fuel generation remains unchanged,’ explains Ribeiro.

Attempts since the 1980s to bring power to the region and use locally-available renewable energy resources have not created widespread, sustainable power provision to the region. Off-grid systems were installed and operated (either through public or private sector funding) by national programmes, utilities, privately-operated systems and local authorities. Pilots have also been run for the purpose of research. Private sector efforts have not worked because of poor logistics, low internal rates of return and the higher risk profiles.

Ribeiro and his colleagues at Winrock and the Renewable Energy and Energy Efficiency Partnership (REEEP), the global partnership that develops innovative policy and finance for sustainable energy, have, however, found that earlier attempts to solve the problem were too technology-driven and that this meant success could not be sustained. Instead, Winrock and REEEP have focused more on ways to make the projects last and above all create a model that can be copied in other parts of the country or even possibly further afield.

But to do that, they had to pull some thorns out of the problem. One of these is related to the omnipresence of the utilities. Every square metre of the country is under a concession contract with a power distribution utility through a complex set of rights and responsibilities. Hence, it is impossible as well as financially unattractive under current regulations to sell electricity to a captive customer without the utility being involved. It has been difficult, then, to create decentralised renewable energy systems as the utilities’ structures and capacities have not been able to accommodate clean energy and they are easily seduced by the already familiar diesel power generators.

But Claudio Ribeiro and other experts argue that they may have found a solution by reframing the way the power is marketed. They have formed a local NGO called PRISMA, which will have the right to both generate and sell energy for public and private use besides promoting local development and empowerment. Instead of the usual arrangement through which the local utility produces and sells power to individual customers, PRISMA will produce the power and sell it to the utility – though all the power will be distributed on a very local level. Something very similar to a micro, independent power producer but suitable to the local conditions and business environment.

The utility in turn will bill the customers. Any type of renewable energy can be used, including wind, biomass and hydro, though Winrock’s demonstration project involves 50KW of installed micro-hydro on the Aruã river in the state of Pará. Through this system, PRISMA acts as a community-based reliable power provider. ‘Regulatory changes are being discussed [to allow the independent power producer to sell to the customer directly] but are too complex. So, what we propose is an intermediary solution that allows the entrance of new players while we are pushing towards regulatory improvement,’ explains Ribeiro.

Winrock and REEEP plan to get two independent power producers running via PRISMA. Ribeiro believes his project is more likely to be successful because his team has laid the ground in a different way from most of its predecessors, he claims. Instead of developing new programmes based on technical improvements, the organisation plans to create a business environment through which it finds companies prepared to buy, sell and install micro power plants in rural areas.

It will also involve local communities in management, help local development by encouraging new skills and aim to avoid unnecessary complex legal change. Winrock is campaigning for changes to the biased subsidy while at the same time developing a new financial mechanism which would not rely so much on the subsidy but would reduce generation costs and commercial losses.

The project has won approval from development agencies. According to Alexandre Mancuso, energy advisor to USAID in Brazil: ‘Among the models tested by the Ministry of Mines and Energy, PRISMA has demonstrated to be feasible and replicable. By properly addressing community ownership, involvement of the local utility, and renewable energy solutions; it gathers all key elements to promote sustainable development and local social inclusion.’

This initiative has also attracted the attention of government agencies and the private sector. The Ministries of Mines and Energy and Science and Technology, in partnership the Inter-American Development Bank, are co-sponsoring the pilot of the PRISMA Model while the Power Utility of the State of Pará (CELPA) is analysing the implications of getting into commercial contracts with the PRISMAs.

There are still many battles to be won, though. The PRISMA project is moderate in size, and the Amazonian basin the largest in the world. The challenges are great but solutions are emerging. Hopefully, working in concert, programmes like PRISMA can provide a model for improved public-private partnerships to accelerate energy access so remote communities don’t wait years to get electricity and related services that will benefit their lives and livelihoods.