A new tool that can be installed easily on a piping surface without adhesive bonding can measure strains on piping quickly and accurately. By Tsunemichi Takahama, Kazuma Nishimura, Seiichiro Ninomiya, Yoshihiro Matsumoto and Yutaka Harada 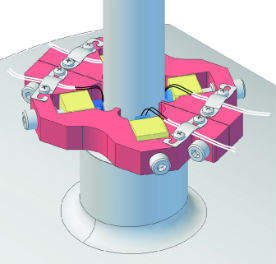 Failure of small bore piping connections due to high cycle fatigue is common industrial problem, including in nuclear power plants. It is important to measure the stresses in an around the welds as a precautionary measure against fatigue failure, which can lead to cracking, leakage of pipe fluid, or even pipe fracture. Several different methods are available including: calculating stresses from accelerations obtained from an accelerometer; calculating stresses from displacements taken with a displacement sensor; and direct measurement of the stresses by using strain gauges.

To assess stresses based on measurements from an accelerometer, a piping or a support should be modelled appropriately for modal analysis, and then the measurements of acceleration are given to the model to estimate the stress distribution on the entire model. Disadvantages of this method include: that a huge number of parameters need to be specified for modelling; that the parameters such as friction coefficient and attenuation coefficient are difficult to specify; and that advanced expertise is necessary where non-linear elements are involved, which requires time and effort before stresses can be obtained.

The use of a displacement sensor is a simpler process. It takes measurements of displacement on a piping surface and converts them into stresses. However, most measurements are only two-dimensional rather than three-dimensional because of difficulties associated with the plant environment. Laser displacement sensors are available, but cannot be used on high temperature piping, which occupies a large percentage of piping exposed to high stresses caused by vibration in a nuclear plant.

The use of bonded strain gauges to measure strains and determine piping stresses provides an accurate and easy stress calculation, and can also be used to evaluate vibration. But fixing strain gauges on a piping surface using adhesive requires time, labour, and skill. A sufficient working area is needed for the personnel to polish the surface of the piping and to bond the gauges, which means they cannot be used in narrow areas. After measurements have been taken, work includes peeling off the strain gauge from the piping surface and polishing it to remove adhesive residue. This lengthy process hinders the use of bonded strain gauges in areas of a nuclear plant where radiation doses are very high.

A new, easily attachable and detachable strain measurement tool has now been developed for assessing stresses on small-bore piping in a nuclear plant. The tool utilises strain gauges in combination with the strain gauge holder that is patented in Japan. It does not need to be attached to small-bore piping using adhesive.

After selecting the suitably sized viselike gauge set for the piping to be measured, the brackets are put together and secured by tightening the locking screws. Once the strain gauge is positioned, the feed screw is tightened, moving the feed nut toward the piping surface. This process presses the elastic mount attached to the tip of the feed nut firmly against the piping surface. Strain measurements are taken conventionally.

For static testing, with the part of the piping fixed to the support plate, static load of different intensities were applied at the end of the cantilevered piping. Engineers varied the positions at which the load was applied by extending the piping with a hexagonal socket.

With some piping configurations, vibration modes other than a primary mode were difficult to observe. To allow comparison of strains during a secondary and/or higher order modes of vibration, testing was carried out with the piping length extended using a hexagonal socket.

Based on the results, it was concluded that the viselike gauge provides static strain measurements that are equivalent to those obtained with adhesively bonded strain gauges.

The difference between the measurements in the two cases is 0.5%, whereas the tolerance specified by the manufacturer of the strain gauges that were used is ±1.0%.

The testing results for dynamic strain measurements (Figure 4) also showed that the wave pattern observed with the viselike gauge is in good agreement with that from the stain gauge adhesively bonded to the bottom of the piping. This was also the case in the control testing, using two adhesively bonded strain gauges.

There was also good agreement between the wave patterns observed with the viselike gauge at the top of the piping and the strain gauge adhesively bonded to the bottom of the piping, when vibration modes other than a primary mode existed.

From the results, it was determined that the viselike gauge provides dynamic strain measurements that are equivalent to those obtained with the adhesively-bonded strain gauge, regardless of the vibration mode.

Initial testing has shown that the viselike gauge provides as accurate measurements of both static and dynamic strain in the axial direction of expansion and contraction as an adhesively bonded strain gauge. As the tool does not require adhesive for fixture to the piping surface it significantly reduces pre- and post-work activities.

Nuclear Engineering Ltd. plans to carry out additional testing to determine whether the viselike gauge can be used for measurement of sheer or torsional strain. It hopes to trial the new tool on vibrating piping in an operating nuclear power plant at the earliest opportunity.