The award of a research grant to a UK university could lead to rapid advances in the use of pico hydro turbines in remote rural communities, writes Arthur Williams 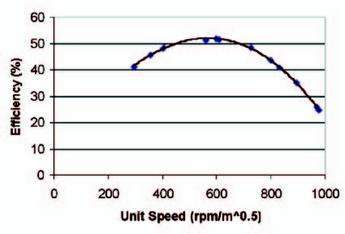 THE Nottingham Trent University in the UK has won a US$200,000 award to fund a major research investigation into the production of water power in rural areas of developing countries.

Over much of the developing world there are remote communities that have no access to electricity. Supplying grid electricity to these communities is uneconomic because of the need for long distribution cables and low power demand. Very small hydroelectric power schemes, with outputs of less than 5kW, can provide an alternative to grid electricity.

These schemes, known as pico hydro, have been shown to be cost-effective, particularly where standardised equipment is available (Maher et al, 1999). In Nepal, for example, more than 800 high head pico hydro systems have been installed in recent years, using batch-produced Pelton turbine units with induction generators (CADEC, 2002). These are suitable for sites where the available head is more than 30m. They are used mainly to supply electric lighting in the evenings, and benefit more than 50,000 people.

Pelton turbines are now being manufactured on a small scale in at least ten developing countries, but not every rural community has access to such a site. There are many low head hydro areas with less than a 10m head, but the ability to harness this potential is hampered by the lack of an appropriate turbine design.

Only in south-east Asia has there been significant use of low head pico hydro (Green, 1994) though the detailed turbine design has not been disseminated elsewhere. A review of existing designs of low head turbines concluded that there were no pico propeller turbines available, which were suitable for widespread local manufacture and implementation (Williams, 2000).

With this in mind a team at Nottingham Trent has been awarded a grant from the Leverhulme Trust to carry out the modelling and design of pico propeller turbines for rural electrification. The aim is to provide an accurate design for cost-effective low head pico hydro turbines that is scaleable for a wide range of hydrological conditions. This will enable small local manufacturers in a range of countries to be able to adjust turbine designs to match a large number of sites.

Local manufacture obviously has several advantages including boosting the local economy, keeping prices down and facilitating local repair and maintenance. To circulate the results of the project, the team will use the internet and the Pico Hydro Network which has members in more than 40 countries.

The proposed pico propeller turbine is a fixed geometry device designed to drive either an induction generator or small permanent magnet generator. Robust technology has been found to be the key to long-term success of remote pico hydro schemes.

Local manufacture means that the propeller turbine design cannot be high-tech. However, to optimise the turbine design, the project will use the latest computational fluid dynamics (CFD) software from Ansys-CFX. For such small turbines, made with basic production techniques, efficiencies tend to be low, and there is often a discrepancy between design parameters and practical performance. The project aims to shed more light on the hydraulic losses within small propeller turbines and hence to improve the designs.

Previous work at Nottingham Trent has resulted in the development of an appropriate turbine layout. Performance of the turbine was investigated in relation to the accuracy of the runner manufacture and surface quality (Demetriades, 1998).

Despite some promising results, with efficiencies of over 50% for less than 1kW output, the actual performance did not meet the target design specification in terms of head, flow and speed. Some initial work analysing the turbine performance using a CFD model shows that there is clearly room for improvement on the original design.

The university will be working with the Latin American office of the Intermediate Technology Development Group (ITDG) based in Peru. A field test site is planned in the foothills of the Andes in the north of the country, where an enthusiastic farmer has already identified a site suitable for generating around 4kW of electricity.

This could be used in the evening for supplying lighting to nearby houses, while in the daytime supplying power for income generating activities, such as incubation of eggs for chicken rearing. The site head is approximately 3m. A small masonry weir will divert water from a river along an open channel, before it descends to the turbine through a short penstock.

The turbine for the field site will be built by an experienced micro hydro manufacturer, who has already installed larger (25kW) turbines (Li, 2000). Manufacture will take place using basic facilities at an open-air workshop in Lima. Involvement of the manufacturer will be vital to develop a design that can be produced at relatively low cost, with adequate performance and reliability.

What the manufacturer lacks is any reliable method for scaling turbine parameters to modify a known turbine design to meet the requirements of a site with different head and flow. This is particularly important in the case of a propeller turbine because of the relatively small operating range over which good efficiency is achievable. The graph below shows an efficiency curve for a prototype turbine, plotted against the unit speed, (speed in rpm) divided by the square root of head (in m). Unit speed has been used because the head varied between 2–3m in the laboratory tests.

One of the key project objectives is to provide a reliable method for the scaling of turbine designs. Once a procedure has been developed it should be possible to disseminate a computer spreadsheet to enable manufacturers to select the appropriate turbine size and runner blade angles for a particular site.

The project grant will be used to employ a researcher for a period of three years. The researcher will carry out CFD modelling, turbine design and field testing. To verify and validate the computational model, a miniature 100W turbine, with a transparent acrylic casing, will be tested in the laboratory.

A test rig fitted with Laser Doppler velocimetry (LDV) will be able to accurately measure water velocities within the turbine. The laboratory measurements will ensure that the CFD is giving reliable results, before using it to carry out optimisation of the turbine design. They will also give additional information to determine scale effects in turbines.

Once a CFD model has been developed it will be possible to make small changes to the design and analyse the effect that these have on the performance. This has two benefits. Firstly, CFD is able to highlight areas of flow separation, and hence hydraulic losses within the turbine. Secondly, it is possible to make changes (and then reverse them) without needing to rebuild a prototype turbine, which would be very time-consuming.

A similar process of analysis is already underway in relation to small pumps as turbines, which has helped to analyse the effects of geometrical changes on the actual flow patterns within the casing and runner (Rodrigues, 2003).

In parallel with the technical developments, dissemination of the technology will follow a proven methodology. This will include monitoring of the prototype at the field test site as a pilot scheme, publishing downloadable documentation on the internet and encouragement of community involvement, which has been shown to be a significant factor in the success of pico hydro schemes (Friesen, 2003).

In this way, research in the UK, using sophisticated analytical tools and with the benefits of a university infrastructure, can be used to develop an ‘intermediate technology’ product that will be suitable for rural communities.