Perkins has boosted its 4000 Series generation line-up with the introduction of a compact and powerful new 16 cylinder motor unit, designated 4016-61TRG3. 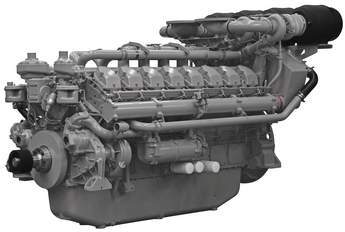 The new engine is said by its makers to offer outstanding power density and compactness and has been developed to provide cost-effective prime and standby power. It extends the series power range upwards by ten per cent compared to the existing 4016TAG2A unit, providing greater engine choice, and is available as an Electropak or Electrounit specification. The first Electrounit model is available now, with Electropak models scheduled to come onto the market in April 2011.

Its main features are listed as exceptional power to weight ratio and good load acceptance for both prime and standby power, combined with good fuel consumption, overall cost of ownership and reliability characteristics.

Making use of direct injection combustion technology, the family of three 61 litre air to water chargecooled engines is said to provide optimum power density combined with containerisation and ease of installation, offering tangible benefits to both genset packagers and end users.

The new unit evolved from a set of target requirements defined as:

Perkins’ customer survey also came up with a series of requirements. The principal demands were that engines needed to be higher power rated, and should fit into a 40 ft container. In addition customers wanted competitive load acceptance at a 50% minimum, a competitive price, and for 60 Hz ratings to be available.

To meet these aims a series of design modifications were made. These included changes to component layout, particularly exhaust manifolds (which had the effect also of improving turbocharger efficiency by reducing its inlet temperature) that resulted in more compact units; and analysing and improving engine coolant flow distribution. Other improvements for the new unit included the following measures:

• Revised air cleaners, one per turbo over the alternator